Pinochet in the car, 1982 celebrating the 8th anniversary of the coup. His dictatorship in Chile was both a step forwards for neoliberalism and a step back for democracy and human rights. Wikimedia Commons

Forefather of contemporary neoliberalism or violent dictator – Pinochet’s complicated legacy in Chile and the world.

General Augusto Pinochet Ugarte, a career military officer, was appointed Commander in Chief of the Chilean army by President Salvador Allende on August 1973. Eighteen days later, with the connivance, if not the assistance, of the US, he authorised a coup against Allende’s Socialist government.

To be clear, Pinochet’s rule was not the first, last or worst dictatorship in the history of Latin America. But it did grip the attention of western countries because of Chile’s comparatively orderly and democratic past, its institutions that made it seem closer to Great Britain than to Spain, its status as the first freely-elected Marxist government in the west, and the questionable role of the CIA in undermining the socialist Allende’s government. 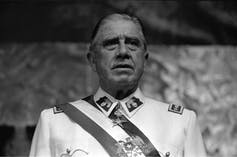 On hearing the news of the coup, Allende dashed to his seat of government in the capital. Then, after his last and remarkable radio address, he shot himself rather than becoming a prisoner. Pinochet proclaimed himself president of the military junta (dictatorship) that followed.

The initial plan held that Pinochet would rule only for a year, to be succeeded by the chiefs of the navy, police and air force. However, Pinochet continued to rule, eventually as President of the Republic by decree (in effect, Chile’s military dictator) up until 1988. At that point, following a constitutional obligation signed eight years earlier, he held a national plebiscite. Unexpectedly to his followers, and no doubt himself, 55% of the country voted against him.

Pinochet retired soon after, in 1990, to what he hoped would be a quieter life as lifetime senator. But in 1998, he was detained in Britain to answer charges of torturing Spanish citizens in Chile during his rule. He was held in Britain for 18 months before being allowed to return to Chile to answer further charges. It was the first time a former head of state had been arrested based on the principle of universal jurisdiction. 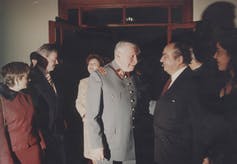 He returned to face 59 criminal complaints for kidnapping, murder, and torture. Those charges never eventuated from a variety of legal complexities, principally because the Chilean Supreme Court ruled him mentally and physically unable to answer them.

He died in 2006 without answering those charges.

Nevertheless, by then, his reputation was damaged, even among his supporters. This is because of the findings of two National Commissions detailing the arbitrary arrests, torture, incarceration, disappearances and political executions that had occurred under his dictatorship. He directed his forces first at the more extreme of the left-wing parties, the Armed Revolutionary Movement (El MIR) and the Socialists, but later none of the members of any left wing party could consider themselves safe.

Some Chileans who had supported Pinochet’s attempt to rid the country of what he called the “communist cancer” withdrew support after allegations of serious financial mismanagement for his own benefit were revealed. For all the accusations levelled against him, Pinochet admitted nothing. Instead, he blamed his senior operatives like Manuel Contreras, his hated head of the secret police, for the terrible abuses that he himself had authorised.

The impact on the development of neoliberalism

One of the biggest impacts of Pinochet’s coup is his contribution to the advancement of an economic theory known as neoliberalism, which arguably has shaped the economies of many modern western countries to this day. Neoliberalism in essence means a distant retreat by the state from total economic management: it wants the state to withdraw from much regulation, encourage free enterprise and competition, and let the market determine real value. By contrast, socialist “command” economies seek to be the regulators of supply, demand and wages.

The last chaotic year of Allende’s presidency, marked by massive protectionism, chaotic land expropriations, strikes, food shortages (some artificially induced) and galloping inflation, certainly demanded reform. This provided the basis for the work a group of conservative Chilean economists had discussed and planned for a decade, which was enacted after 1973. 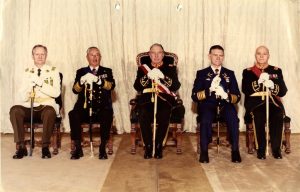 These economists renewed international trade, reduced inflation and divested the state of some of its assets. Some of these actions proved unwise, including selling some national utilities to Spanish companies, which did not necessarily run them in the interests of Chile.

The debates about Pinochet’s economic achievements continue, especially for the period after 1982, when the benefits of neoliberal practice faltered. His successes are still held by some to be a Chilean miracle, but the reality was a situation heavily tilted in his favour at a time when political opposition was eliminated, trade unions weakened and working class wages determined by the military dictatorship. The revelations of massive human rights abuses has further tarnished some of this achievement.

We can now also detect some unforeseen consequences, thanks to Chile’s long and successful tradition of reconciliation after political trauma. The ten years of centre-left rule that followed Pinochet was a remarkable achievement, as was the first four-year term of the moderate centre-right Piñera government from 2010. This was the product of the peacemaking tradition called the via Chilena, the Chilean way.

Those who had achieved political exile in East Germany or the Soviet Union during Pinochet’s government did not take long to discover that life under the communist state was not the people’s utopia they had hoped to achieve in their own country.

Some returned, somewhat disillusioned, after 1990 to become high officials in much more moderate administrations than those they had planned many years before. They had learned not to make political changes too fast. Other exiles taking refuge in western Europe learned alternatives to a program of people’s revolution in every Latin American nation as taught by Che Guevara. They came to appreciate the lessons of Euro-Communism, that political change need not be wrought by violence but negotiation and co-operation with less radical left-wing parties. 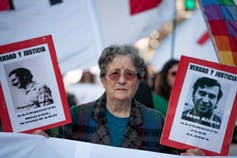 Woman holding pictures of victims of Pinochet’s rule, marching in commemoration of the coup, 2015. Mauricio Gomez/Crowdspark/AAP

Some reverberations from Pinochet’s rule are still also working themselves out. Members of what was once the radical and optimistic left, who gave so much to the radical cause and suffered so grievously, now wonder about the value of their struggle under Pinochet as they contemplate the low wages of today, much unemployment and, especially, wide disillusionment in the processes of government.

Some of their children have come to the same, but more pointed, conclusion. Fifty or 60 Chileans were actually sent to Cuba by their parents so they could re-enter the country at a later stage to continue the armed struggle against Pinochet. The children did not enjoy the experience. The documentary El edificio de los chilenos (The Chilean House) shows the filmmaker subjecting her once-radical mother to an excoriating interrogation as to whether her ideology, and by inference, any political ideology, should supervene her duty to care for her children.

Pinochet is now remembered not so much as someone who saved his country from becoming a second Cuba, or for clearing the ground to test economic theory. Rather, internationally he is recalled for his sensational detention in the UK. That’s an important outcome that, perhaps, makes every retired dictator think twice before venturing from their homelands.