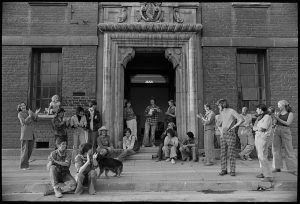 Several feminist art archives to be preserved and accessible thanks to new grant. 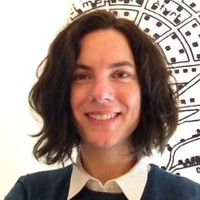 On June 8, 2018, thanks to the efforts of the Los Angeles Conservancy and passionate community support, the City Council designated the Woman’s Building a Historic-Cultural Monument. The designation ensures the long-term protection of a building described by art critic and activist Lucy Lippard as “the capital of cultural feminism.”(1)

Now, we are thrilled to announce that, thanks to funding from the Save America’s Treasures grant program, the Getty Research Institute will preserve important archives documenting the groundbreaking artistic, educational, and political activities of the Woman’s Building. Administered by the Institute of Museum and Library Services in collaboration with the National Park Service, the grant program funds projects that preserve “nationally significant historic properties and collections that convey our nation’s rich heritage to future generations of Americans.”

Each collection in this project is valuable on its own terms, from the Woman’s Building records and videos to the archives of several feminist artists and artist groups who were active at the Woman’s Building, including Nancy Buchanan, Barbara T. Smith, Faith Wilding, Feminist Art Workers, Mother Art, Sisters of Survival, and the Waitresses. But considered together, they illuminate—in strikingly poignant ways—major initiatives, struggles, and dynamics of the women’s movement from the 1960s to the twenty-first century.

As reflected in its archives, the Woman’s Building was not just a physical structure. It was also an innovative educational institution and an organizational center for the feminist movement.

The heart of the Woman’s Building was the Feminist Studio Workshop (FSW), one of the first independent art schools for women. Based on a feminist pedagogical model rooted in the idea that collectivity and a safe, inclusive environment are essential for women artists to develop, the FSW provided an alternative to traditional arts education and the male-dominated environment at CalArts, where all three founders previously taught.(2)

The Woman’s Building was also home to art galleries, performance spaces, and feminist-owned businesses. Exhibitions ranged from single-artist surveys to vast thematic explorations like The Great American Lesbian Art Show (1980). For the artists noted above, as well as Margaret Atwood, Judy Baca, Audre Lorde, Rachel Rosenthal, Adrienne Rich, Martha Rosler, Betye Saar, and many more, the Woman’s Building was a supportive space for artists and writers to develop and present their work, individually and collaboratively.(3)

The archive of the Woman’s Building as an organization offers an overview of the building’s activities from its founding until it closed in 1991. Contents include announcements, posters, manuscript material, and thousands of images of exhibitions, readings, performances, and the building itself. 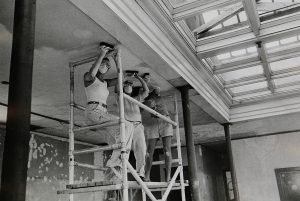 Among more than 250 videos in the Woman’s Building collection are numerous oral histories, now-iconic feminist video art works like Nun and Deviant (1976) by Nancy Angelo and Candace Compton, as well as documentation of events and performances such as In Mourning and In Rage (1977), an influential public media performance staged by Suzanne Lacy and Leslie Labowitz on the steps of City Hall to protest violence against women and sensationalist news coverage of the “Hillside Strangler.” 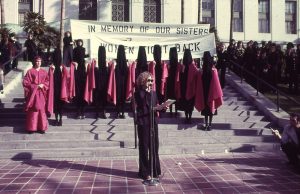 In 1973, the artist collective Mother Art was formed by FSW participants to address practical needs, such as childcare at the Woman’s Building, and to produce sociopolitical art projects focused on pressing issues such as immigration, abortion, and homelessness. The Feminist Art Workers, formed in 1976 by Angelo, Compton, Cheri Gaulke, Laurel Klicka, and later Vanalyne Green, incorporated feminist pedagogical techniques in participatory performance art. In 1977, Jerri Allyn and Anne Gauldin cofounded the Waitresses, a performance art group that used humor to explore issues related to women’s labor, with a focus on topics that still resonate today, including sexual harassment, stereotypes, and wage inequality. Sisters of Survival, an anti-nuclear performance art group founded in 1981 by Allyn, Angelo, Gauldin, Gaulke, and Sue Maberry, toured and collaborated with other anti-nuclear activist groups throughout the United States and Europe. 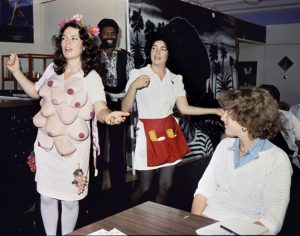 The archives of individual artists who contributed to the Woman’s Building present diverse perspectives on the women’s movement and the intersection of feminist activism and the visual arts, particularly in Southern California. Faith Wilding was one of the inaugural members of the Woman’s Building, and her archives reflect the diffusion of West Coast-based feminist art and theory throughout the United States. The papers and videos of Nancy Buchanan, a pioneer of performance, video and conceptual art, show how feminist artists used art as a tool for raising awareness of contemporary political and social issues. 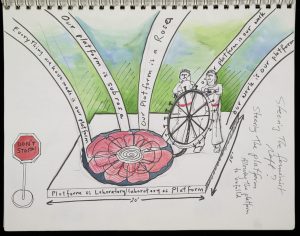 In addition to documenting the history of the Woman’s Building, the collections are also rich resources for the study of performance art, video art, and the history of art in Southern California more broadly.

Thanks to the Save America’s Treasures grant, the Getty Research Institute can accelerate processing and preservation of 11 archives, and digitization of materials most at risk of deterioration. Speedy completion of the work is particularly important given the salience of the collections to current events in the United States and ongoing activism around women’s rights.

Grant-funded digitization efforts will focus on acetate and magnetic media that are at particularly great risk of deterioration. These include thousands of photographic negatives and slides, several hundred audio and video recordings, and more than 40 film reels. Because fluctuations in temperature and humidity can be quite harmful to acetate film and magnetic media, storing them in a climate-controlled environment is critical to their preservation. Digitization of this material will allow us to make digital versions available for research, while the originals remain safely in storage.

The digitization project will also include critical films and audio and video recordings from the papers of Barbara T. Smith, an influential figure in the history of feminist art and performance art in Southern California. While much of her archive is already available for research, these items have been unavailable due to conservation concerns. 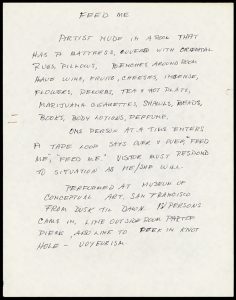 The two-year project begins in December 2018 and ends in November 2020. Once processed and preserved, all of the archival collections will be freely accessible for research.