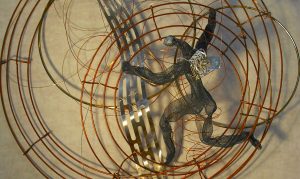 Marx and Freud have two things in common, first of all they both revealed what was behind appearances yet was kept from awareness. For Marx capitalism was an economic system that depends on the exploitation of labor and immiseration of the proletariat which was masked by progressive ideologies. Freud revealed that behind our polite, civilized manners, powerful sexual and aggressive desires were repressed- that repression was maintained by guilt – suffering was the price we paid for civilization. Secondly, they are like vampires they are constantly declared dead but always arise from their graves. Each has had a profound effect on American thought in general and sociology in particular. How so? As discussed primarily by media scholars, perhaps the first notable impact of psychoanalysis in America took place when Louis Bernays, Freud’s nephew, came to America and integrated his uncle’s theories of the psyche and desire with mass marketing, public relations, and political propaganda.[1] Most notably, in the early part of the 20th century most “proper” women did not smoke cigarettes. Bernays, understanding the growing pressures toward female equality and suffrage, organized a march of “respectable women” who paraded carrying and smoking cigarettes, now defined as “torches of liberty, ” a.k.a. penis power. Today, over hundred years later, it is well known fact in consumer studies that “sex sells” and in so far as 70% of the American economy is based on consumption, and sexual messages that are often hidden, and today often not so hidden, blatant erotic imagery encourages people to buy anything and everything. Indeed some of the adverts for hamburgers shade into soft-core porn as scantily clad women mimic oral sex while eating such burgers.

The concerns with socialization, personality and character have been part and parcel of sociology for a long time. But most of these interests have been anchored in the symbolic interactionist traditions of James, Cooley and most notably George Herbert Mead. On the one hand, this tradition has been primarily concerned with interaction, from preverbal play and the exchanges of smiles and gestures to complex games with complex rules that require cognitive development and the use of symbols especially language that enables taking the role of the Other- the basis of more or less conscious self-conceptions and self-presentations (see Manning, 2005). But as symbolic interactionism emerged in sociology, a number of anthropologists from Bronislaw Malinowski to Ruth Benedict and Margaret Mead, influenced by Freudian thought, initiated investigations ranging from the Oedipus complex in matriarchal societies, sexuality and gender roles and/or psycho-cultural patterns influenced by Freudian thought. Given the exclusively cognitive – behavioral aspects of symbolic interactionism questions were raised as to unconscious thoughts, emotions and motivation, defenses (repression) and even understandings of irrational collective behavior.[2] Thus there was a growing interest in psychoanalytic theory as a means of filling in certain gaps in symbolic interactionism. Perhaps the salience of psychoanalytic theory was most fully articulated by Talcott Parsons (1964) for whom psychoanalytic theory played a major role in his theory of social action, primarily in terms of motivation and development. To be sure erotic desire and aggression became sanitized as “need dispositions,” yet Parsons’ view of the Oedipus complex as the basis of internalizing the dominant values that were necessary for adaptation was a major theoretical contribution. To be sure, his structural functional views and concern with adaptive conformity have been criticized by many. Among the most cogent critiques of his perspective was Dennis Wrong (1960) who argued that Parsons’ view of Freud eliminated the possibility of resistance and critiques of domination and left instead a completely untenable view of an “over socialized” concept of humanity, one that may have in fact described the “organization man” and his homemaker wife in suburbia circa 1950s. But that notion, or myth, was changed by the antiwar movement, the sexual revolution, feminism, the beginnings of environmental concern and gay activism.

In the last half-century however, while only a handful sociologists have been actively attempting to integrate psychoanalytic theory and society, the influence, often indirect, has been much broader. Perhaps one of the most enduring concepts coming from psychoanalytic theory, via the Frankfurt school, has been the nature of authoritarianism, the tendency to submit to the authority of “superiors” and dominate and/or denigrate inferiors, kiss up, step on those below (Adorno et al., 1950). Authoritarians are generally conformists, anti-intellectual, and typically hostile toward members of outgroups. Thus many sociological studies of prejudice, right-wing religion, and right-wing social movements have noted the salience of authoritarianism as disposing conservative, if not reactionary religious, political and cultural behavior. Indeed this has become especially salient as Donald Trump secured the Republican nomination for president. For psychoanalytic theory, authoritarianism, is closely tied to sadomasochism (for extensive work on this topic see Lynn Chancer, 1992).

Although rooted in the writings of Tocqueville, and informed by the culture and personality anthropologists, and perhaps especially the studies of “social character” by Eric Fromm, many sociological studies of “American character” have been influenced by psychoanalytic theory. Philip Slater (1970), pointed out how the repression of desires for community, attachment and dependency, basic human needs according to Freudian theory, especially in more recent developments in object relations theory, had given rise to an intense indeed irrational rage toward various expressions of community and communal orientations. Perhaps this was clearly seen in the anti-Catholicism of the 19th century and the anti-Communism of the postwar period. But this rage became especially evident in the late 1960s when there was intense, indeed irrational hatred directed toward the hippie counterculture that had placed primary emphasis on the communal, as many of the aficionados of drugs and sex and rock ‘n roll retreated to communes. Moreover their blatant openness regarding sexuality/nudity, further offended the more conservative, read repressed, elements of the society.  And the anti-war activists were seen as communists.

In 1961, sociologist Urie Bronfenbrener, noted the changes in American parenting and child rearing childrearing in which the stricter, more authoritarian disciplinary techniques had been supplanted by more empathic, less punitive socialization practices tolerant of impulses and affection. (Perhaps this disposed the aforementioned counterculture.) Alex Inkeles (1980), another scholar of national character, both of Americans and Russians, noted in his work that for the most part there had been a great deal of continuity of American character over several generations, but one of the major differences had become the more liberal attitudes toward sexuality to the point where today, the vast majority of Americans have had sexual partners before marriage.

We might finally note that a number of sociologists have been influenced by the work and legacies of Eric Fromm whose books at one time sold in the tens of millions of copies. Perhaps we should note the work of Kevin Anderson (1980) who has published on Fromm’s theories of deviance/criminality, or Niel McLaughlin who has written extensively on Eric Fromm. Indeed they, along with Lynn Chancer and this author recently organized a conference on Eric Fromm that was generally considered a great success.

Fromm has been a major influence in my own work, especially his concerns with right wing movements and social character. In his classical study of the rise of fascism, Fromm (1941) had argued that the conditions of capitalist modernity, greater freedom, weaker social ties, greater self-reliance along with economic uncertainty disposed a great deal of anxiety that in turn motivated several important defenses, what he called “escape mechanisms” such as conformity, authoritarian submission to charismatic leaders and aggression toward outgroups. Fromm’s work has inspired my own analyses of the tea party,  ISIS or the support for Donald Trump. While these may seem radically different movements, they share some common features, more precisely, when authoritarians face various crises beginning of course with economic crises and uncertainties, compounded by a loss of self-esteem based on such things as patriarchy, racism, homophobia, there is intense anger generally directed toward outgroups. In other words, many of the reactionary social movements of today can be understood as mobilizations for dignity. But I might also note that so too are many of the progressive movements ranging from Arab spring to Occupy and more recently the support for Bernie Sanders. The progressive movements generally appeal to more educated, less authoritarian actors and are less motivated by hatred, revenge and nihilistic aggression, than by hope for a better, more democratic, inclusive tolerant society. And of course we might remember that Ernst Bloch, a member of the Frankfurt school, informed by Freud’s theory of the dream as wish fulfillment, made hope a central moment of progressive thought and mobilization.

I might finally note that I with my co-author George Lundskow, inspired by Eric Fromm, we just finished a book, God, Guns, Gold and Glory in which we argued that certain aspects of American culture and character, its Puritan origins and the legacy of its religiosity, its propensity toward (male) violence, its materialist strivings and its narcissistic exceptionalism that collectively led to its ascent to the pinnacle of wealth and power now undermine that wealth and power (Langman and Lundskow, 2016). But that said, between its economic decline and liberalization of social values, a newer more progressive generation is emerging, with a more democratic, inclusive underlying social character whose numbers are now increasing in every generation while older more conservative if not reactionary cohorts are exiting from the scene of world history. Thus despite the gloom, doom and despair so often seen today, we are indeed optimistic, that as the activists of the World Social Forum proclaim, “another world is possible.” Let us hope so – the alternative lies between barbarism and the annihilation of the human species.

(1) An excellent documentary was produced by the BBC, Century of the Self, https://www.youtube.com/watch?v=eJ3RzGoQC4s.

(2) In the 1930s and 40s, the Frankfurt School of Critical Theory, influenced by Freud, had initiated studies of authoritarianism and the psychological appeals of fascist propaganda. When scholars such as Horkheimer, Adorno, Marcuse and Fromm came to the United States, there was a growing interest in psychoanalysis by American social scientists.