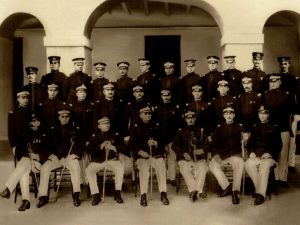 Puerto Ricans were granted U.S. citizenship on the eve of America’s entry into the First World War. This picture comes from 1906 and shows the officer staff of the Regiment of Infantry. (Wikimedia Commons)

With the quick flick of a pen in March 1917, Puerto Ricans suddenly had the opportunity to become American citizens. 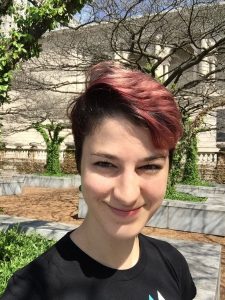 wo days before his second inauguration, President Woodrow Wilson signed a bill that had a profound impact on the identities of more than 1 million people. With the quick flick of a pen in March 1917, Puerto Ricans suddenly had the opportunity to become American citizens. The big question was, would it change anything?

It was a promise Wilson had campaigned on in 1912—home rule for Puerto Rico and citizenship for Puerto Ricans, in part because he recognized the commercial advantage of having better relations with Latin America. But the Jones-Shafroth Act didn’t truly fulfill either of those promises, and the timing couldn’t have been more dubious. The nation’s imminent entrance into World War I would mean that with citizenship came the calculation of risking one’s life for a nation that until recently, had offered nothing but political condescension.

But the full story is more than a simple narrative of U.S. dominance over a less powerful territory. The real relationship Puerto Ricans had with their new civil identities was one of “love and hate,” says Puerto Rican studies scholar Milagros Denis-Rosario. And while the Jones-Shafroth Act may have seemed like a turning point, the island’s political journey has remained stalled ever since.

Until 1898, Puerto Rico had flown the Spanish flag for centuries, dating back to when Christopher Columbus colonized the island in 1493. During the Spanish-American War, U.S. troops invaded Cuba and Puerto Rico to gain a strategic foothold in the Caribbean. They quickly bested Spanish forces in Puerto Rico, installed a military government, and gained ownership of the island under the December 1898 Treaty of Paris—all within four months. In April 1901, President McKinley signed the Foraker Act, making Puerto Rico an “unorganized territory” and giving Puerto Ricans some constitutional protections like due process under the law and freedom of expression, though not citizenship. The act also established the island’s new political structure. Absolute power lay in the hands of a governor and 11-member executive council (all non-Puerto Rican Americans, appointed by the President), while Puerto Ricans could vote for a resident commissioner (who had a seat but no vote in the U.S. House of Representatives) and a 35-member House of Delegates for the island.

Theodore Roosevelt was the first American president to visit Puerto Rico, and his administration portrayed the islanders as hapless natives. “Before the people of Porto [sic] Rico can be fully entrusted with self-government they must first learn the lesson of self-control and respect for the principles of constitutional government,” said Secretary of War Elihu Root, who authored the Foraker Act. “This lesson will necessarily be slowly learned… They would inevitably fail without a course of tuition under a strong and guiding hand.”

The Act was repeatedly criticized by Puerto Rican politicians, who sought autonomy. Under Spanish rule, they had been given the right to 16 representatives and three senators. “The inventors of this labyrinth find pleasure in repeating that we are not prepared [for self-government]. I wish to return the charge word for word,” said Puerto Rico’s resident commissioner, Luis Muñoz Rivera. “American statesmen are not prepared to govern foreign colonies so different in character and of such peculiar civilization.”

And indeed, Puerto Ricans were hamstrung in their ability to manage the island. The commissioners who oversaw education and the island’s police force were both American and unfamiliar with the history and culture of the island. They made efforts to shape the island in ways that would be most beneficial to the United States, not Puerto Ricans, such as making English the official language. Even when elected Puerto Rican delegates attempted to pass their own legislation, it could be rewritten or vetoed at the whim of American politicians on the executive board. “When Puerto Rico’s assembly voted to allocate funds to help earthquake victims or to establish scholarships to encourage education, the attorney general reportedly canceled the allocations as supposed violations of [federal law],” writes political scientist and historian David Rezvani.

This simmering discontent on the island was apparent to Puerto Rico’s governor, American Arthur Yager, and the Bureau of Insular Affairs chief Frank McIntyre, who both stressed that to delay citizenship would risk undermining U.S. interests. Combined with Puerto Rico’s strategic military location, its proximity to the Panama Canal, and the economically motivated desire to have a better relationship with Latin America, it seemed like the ideal time to mollify Puerto Ricans with something seen as invaluable: U.S. citizenship.

But when Jones-Shafroth Act came to fruition, it only seemed to create more ambiguity about Puerto Rico’s place in the United States and the identities of its citizens. “They don’t have the right to vote for President of the United States and they don’t have representation in the U.S. Congress,” Denis-Rosario says. “That is contrary to the firm belief of the U.S. This is creating two types of citizenship: those who live on the island, and those who live in the U.S.”

Undoubtedly the lack of political autonomy and full citizenship was a disappointment, but island politicians, who were mostly pulled from the upper echelons of Puerto Rican society, latched onto the United States’ imminent entry into World War I as an opportunity to gain full citizenship. Antonio Rafael Barcelo, president of the Puerto Rican senate, requested that the draft be extended to the island following the Jones-Shafroth Act with the understanding that neither his family nor his colleague’s would be negatively impacted.

“Puerto Rican elites wasted no time volunteering the peasantry into military service… the jibaro [mountain-dwelling peasant] was to be transformed into a new man by virtue of military service,” writes historian Harry Franqui-Rivera. The draft was a way for Puerto Ricans to prove their patriotism, be it for the U.S. or Puerto Rico; for politicians supporting statehood to prove their loyalty to the U.S; and for those who favored independence to gain a useful civic education that could be put towards self-governance. And in the minds of the Wilson administration and Congress, Puerto Ricans engaged in military service would learn English and gain familiarity with American culture and values.

On the first day of the draft, 104,550 Puerto Rican men registered. That number eventually reached 236,853, of whom 17,855 were called to report, a percentage similar to national averages.

Military enrollment didn’t always have the positive impacts American and Puerto Rican politicians hoped it would. Denis-Rosario notes that Puerto Rican soldiers, like African-Americans, were segregated from white soldiers during World War I. For some independence-minded Puerto Ricans, this only strengthened their zeal for eventual self-rule. But, she adds, American citizenship also changed Puerto Ricans’ view of themselves. “I think Puerto Ricans started to feel like they belonged to something, and it triggered more immigration to the U.S.,” she says.

Puerto Ricans continue to struggle with the dichotomy of being American and also something else today; even 100 years later, the island remains an unincorporated territory of the U.S., as it has been from the start. Although Congress passed the Federal Relations Act in 1950 (recognizing the island’s authority over internal governance) and approved the island’s Constitution in 1952, residents still lack voting representation in Congress, don’t have the same eligibility for federal programs as states, and can’t vote in presidential elections. The ambiguous nature of Puerto Rico’s sovereignty has caused numerous legal and financial problems for the island, most recently the island’s debt crisis that left Puerto Rico unable to refinance its debt or declare bankruptc. An independent board is overseeing the crisis—which, once again, was chosen without Puerto Ricans having the opportunity to vote on its members.

“It’s a challenge because they’ve been U.S. citizens for 100 years,” Denis-Rosario says. “Today there are people who would like independence, but they have so much dependence, psychologically and economically on the U.S. Nobody has come up with a real solution.”