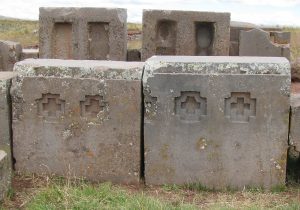 Though some claim the stone structure at Pumapunku were alien, archaeologists find no real mysteries there.

Today we’re going to climb high into the Andes and take a look at an ancient structure that has been cloaked with as much pop-culture mystery as just about any other on Earth: Pumapunku, a stone structure that’s part of the larger Tiwanaku. Pumapunku, which translates to the Doorway of the Puma, is best known for its massive stones and for the extraordinary precision of their cutting and placement. It’s one of those places where you’ve heard, probably many times, that the stones are so closely fitted that a knife blade cannot be inserted between them. Due to these features, Pumapunku is often cited as evidence that Earth was visited by aliens, Atlanteans, or some other mythical people who are presumably better at stonemasonry than humans.

Tiwanaku is in Bolivia, up in the Titicaca Basin, about 10 kilometers away from the great Lake Titicaca. The Titicaca Basin is high; 3,800 meters (12,500 feet) above sea level. Half is in Peru and half is in Bolivia, and right on the border sits Lake Titicaca. It’s in a vast region of the Andes Mountains called the Altiplano, or “high plain”, the largest such plain outside of the Himalayas. The Tiwanaku Culture predated the Inca, and their history is known largely from archaeology, since they had no written language that we know of. The earliest evidence of habitation dates from around 400 BC, but it wasn’t until about 500 AD that the Tiwanaku Culture truly developed. At its peak, 400,000 people lived in and around the Tiwanaku site, centering around Pumapunku and other important structures. Trade and farming flourished. Farming was done on raised fields with irrigation systems in between them. Decades of drought struck around 1000 AD, and the city of Tiwanaku was abandoned, and its people and culture dissolved into the surrounding mountains. Five centuries later, the Inca Culture developed.

So within the context of Tiwanaku, Pumapunku does not leap out as extraordinary. However it does differ from the other structures at Tiwanaku, in that many of the blocks are shaped into highly complex geometries. There is a row of H-shaped blocks, for example, that have approximately 80 faces on them; and all match each other with great precision. Pumapunku’s stones suggest prefabrication, which is not found at the other Tiwanaku sites. In addition, some of the stones were held together with copper fasteners, some of which were cold hammered into shape, and others that were poured into place molten.

Due to the complexity and regularity of many of Pumapunku’s stone forms, a number of authors have suggested that they’re not stones at all, but rather concrete that was cast into forms. We don’t have any record that such technology was known to pre-Incan cultures, but that doesn’t prove it wasn’t. What can be proven, and proven quite easily, is that there is no concrete at Pumapunku or anywhere else in Tiwanaku. Contrary to the suppositions of paranormalists, modern geologists are, in fact, quite able to discern rock from concrete. Petrographic and chemical analyses are relatively trivial to carry out, and even allowed us to determine exactly where the rocks were quarried. Pumapunku’s large blocks are a common red sandstone that was quarried about 10 kilometers away. Many of the smaller stones, including the most ornamental and some of the facing stones, are of igneous andesite and came from a quarry on the shore of Lake Titicaca, about 90 kilometers away. These smaller stones may have been brought across the lake by reed boat, then dragged overland the remaining 10 kilometers.

Much is often made of the vast size and weight of the Pumapunku stones, with paranormal websites routinely listing them as up to 440 tons. Pumapunku does indeed contain the largest single stone found at any of the Tiwanaku sites, and it’s part of its Plataforma Lítica, or stone platform. The accepted estimate of this piece of red sandstone’s weight is 131 metric tons, equal to 144 US tons. The second largest block is only 85 metric tons, and the rest go down sharply from there. The vast majority of the building material at Pumapunku consists of relatively small and easily handled stones, although many of the most famous are megalithic. The absurd numbers like 440 tons come from much earlier estimates, and have long since been corrected.

We do not claim to know how the heavy lifting and exquisite masonry was accomplished at Pumapunku, but that’s a far cry from saying we believe the Tiwanaku were incapable of it. We simply don’t have a record of what tools and techniques they used. All around the world are examples of stonemasonry from the period that is equally impressive. The Greek Parthenon, for example, was built a thousand years before Pumapunku, and yet nobody invokes aliens as the only explanation for its great beauty and decorative detailing that more than rivals Pumapunku’s angles and cuts. At about the same time, the Persians constructed Persepolis with its superlative Palace of Darius, featuring details that are highly comparable to Pumapunku. Stonemasons in India cut the Udayagiri Caves with megalithic doorways that are very similar to those in Pumapunku. The Tiwanaku did magnificent work, but by no means was it inexplicably superior to what can be found throughout the ancient world. It is unnecessary to invoke aliens to explain the structures.

Curiously, if you do an Internet search for Pumapunku, you’ll find it almost universally, and quite casually, referred to as a “port”. At least, this is what it’s called on the paranormal web pages, which make up the overwhelming bulk of Pumapunku information on the Internet. In fact, it’s not a port, and it never was a port. To anyone doing even the most basic research or visiting the area, it’s a fairly bizarre assertion, considering that Pumapunku was in the middle of a vast farming nation of 400,000 people. Nor are Tiwanaku’s structures in locations where they could serve as a port. Pumapunku is just one of several stepped platform constructions that have been excavated at Tiwanaku. The others include Akapana, Akapana East, Kalasasaya, Putuni, and the Semi-Subterranean Temple. If you look at them from above, they’re simply squarish enclosures scattered about the area. If you imagine water filling the region — let’s pretend just high enough to cover the ground but not the enclosures themselves — then each of these “ports” would be an island unto itself, amid a sea of knee-deep water too shallow to be navigable. (That is, except for the Semi-Subterranean Temple, which being recessed into the ground, would have been underwater.)

But even that imaginary scenario presumes that the lake could ever reach Tiwanaku. It can’t. The Altiplano is a vast sloping plain, and the point at which Lake Titicaca spills off the edge into its sole outlet, the Río Desaguadero, is about 30 meters below the elevation of Tiwanaku. Has this always been the case? At least since the last ice age, yes. Because the sediment at the lake’s bottom has been accumulating for some 25,000 years, it’s one of the best places to get data about Earth’s climate history, and so it’s been extensively studied. The paleohydrology of Lake Titicaca is thoroughly known. Currently, the water is at its overflow level. This level has fluctuated about 5 meters in the past century. During the past 4,000 years, it has dropped as much as 20 meters during drought periods. The maximum it’s ever been is about 7 meters above overflow level, which would still locate the shore many kilometers away from Tiwanaku’s suburbs and farms.

Most of these same paranormal sources that refer to Pumapunku as a port also state that the ancient shoreline is still visible along the surrounding hills, albeit tilted at a strange angle. Ancient lake levels are often visible in such a way — they’re quite prominent throughout Death Valley where I often visit, for example. But it makes no sense for Lake Titicaca. The lake would spill off the edge of the plain before it could get as high as Tiwanaku; and there’s certainly been no tectonic activity in that time that could have tilted the hills, or mysteriously tilted the hills yet left the Tiwanaku structures level.

Finally, one other feature at Pumapunku is said to have the archaeologists baffled: Carved figures, said to represent an elephant relative called a Cuvieronius, and a hoofed mammal called a toxodon. These both went extinct in the region around 15,000 years ago, and so some paranormalists have dated Pumapunku to 15,000 years, apparently based on this alone. When you hear that an elephant is carved there, it certainly does give you pause, because an elephant is hard to mistake. However, when you look at a picture of what’s claimed to be the elephant, this becomes less surprising. Tiwanaku art was highly stylized, much like what we’re accustomed to seeing from the Mayans or the Aztecs. It’s actually the heads of two crested Andean Condors facing each other neck to neck, and their necks and crests constitute what some have compared to the tusks and ears of an elephant’s face. The image of the toxodon is known only from rough sketches of a sculpture discovered in 1934, and so it’s a drawing of indirect evidence of an artist’s interpretation of an unknown subject. It looks to me like a generic quadruped. Pig, dog, rat, toxodon, name it.

So once again, we have an accomplishment by ancient craftsmen whom some paranormalists have attempted to discredit by attributing their work to aliens. This is not only irrational, it’s a non-sequitur conclusion to draw from the observations. Most people don’t know how to intricately cut stones because those are skills we haven’t needed for a long time — we’ve had easier ways to make better structures for a long time. But this argument from ignorance — that just because we don’t know how to do it, nobody else could have figured it out either — is an insufficient explanation. Simply say that you don’t know, instead of invoking aliens. This is not only the truth, it accurately represents the findings of science so far; and perhaps most importantly, it leaves the credit for this wonderful contribution to humanity where it belongs: with the Tiwanaku themselves.