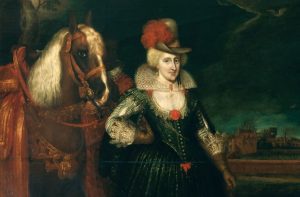 Following the death of queen Elizabeth I, Queen Anna of Denmark became England’s first queen consort in over 40 years. As the wife of reigning King James I, Anna’s royal position differed vastly from Elizabeth’s. Anna after all did not have governing powers, and her position as James’ “wife” (femme covert) folded her legal identity under her husband’s within the law of Coverture. Yet Anna was determined to make a social and artistic impact during her time on the throne; and the court performances she commissioned had the dual impact of shaping English literature of the period and opening the door for women to participate in dramatic performance.

During the seventeenth century, conduct codes demanded women’s silence, chastity, and obedience. For this reason, English law banned women from acting on public stages where their voices would be heard by large audiences. All professional, public drama was written and performed by men. 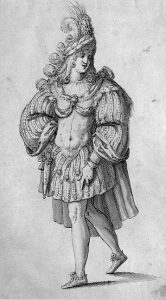 “Costume for a Knight,” by Inigo Jones. Anna of Denmark promoted Samuel Daniel, Ben Jonson, and Inigo Jones as the period’s premier creative minds with her “queen’s masques.”

Within the court, however, in silent dance performances called “masques,” women did have the opportunity to perform for other elites. While these performances were traditionally designed to display court wealth and introduce marriageable young men and women, Anna used her influence to create a series of popular and controversial “queen’s masques” that featured only women. Hand-selecting the writers, costumers, musicians, and choreographers who would design the show, Anna gained control over the men’s career paths; and she promoted Samuel Daniel, Ben Jonson, and Inigo Jones as the period’s premier creative minds. At the same time, Anna was able to carve out space for communicating her own messages. Much of her emphasis went to the importance of women’s communities and the problematic nature of women’s silent social roles.

In her very first English masque, “The Vision of the Twelve Goddesses,” Anna commissioned a performance representing her and her ladies as classical Greek goddesses come to earth. Within the all-female show, Anna took the role of Pallas Athena, patron of the arts and education, rather than Juno, wife of the reigning Zeus. Drawing on the military and political strength of England’s previous queen, Anna even costumed herself in Elizabeth I’s clothing—robes that would have been identifiable to the courtiers in attendance. Costuming herself with Elizabeth’s garments allowed Anna to draw court memory toward Elizabeth I’s physical presence—a presence often marked by assertive vocal performance rather than silence or docility. Importantly, Elizabeth had spoken in political and domestic spaces, which offered a constant reminder of her international importance as well as her domestic necessity to court. She also communicated through her own poetry, highlighting her role as an artist and author. Within her first English masque, Anna connected herself to mythological and human women who defied feminine stereotypes; and she called attention to herself as an individual woman with control over the nation’s artistic pursuits. Within these pursuits, her masque suggested, women and their interests would be central. 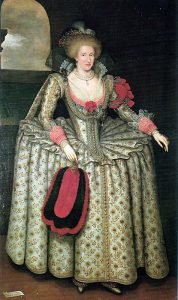 Throughout her reign, Queen Anna of Denmark continued commissioning and performing in all-female masques that explored complex gender issues of the time.

Throughout her reign, Anna continued commissioning and performing in all-female masques that explored complex gender issues of the time. Early masques the “Masque of Blackness” and the “Masque of Beauty” confronted expectations of women’s racial or physical attractiveness by involving blackface and the performers’ exposed breasts.

“The Queen’s Masque” tapped into literary and historical representations of powerful female leaders to undermine contemporary expectations of women’s inherent weakness; and Anna unveiled a new character, Bel-Anna, who represented all the strengths and beauties of her ladies combined. By the time of her last masque, “Cupid’s Banishment,” Anna retired to the audience to witness the performance school girls danced in her honor; and for the first time, female masquers danced to spell out the name of a female ruler rather than a king.

From 1603-1617, Anna shifted masque away from its traditional role in marrying ladies off, and she developed a field of performance that highlighted women’s relationships to each other and to intellectual pursuits. Contemporaries noted that in doing so, Anna created a “feminine comon welthe” that served as counterpoint to the male dominated court of James.

Though Queen Anna of Denmark and her ladies never spoke on stage, her successor Queen Henrietta Maria would not only continue the new form of all female masquing, but she would open the door to women speaking on stage. 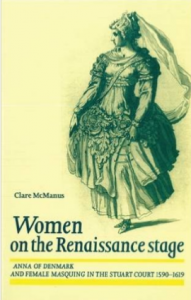 Women on the Renaissance Stage: Anna of Denmark and Female Masquing in the Stuart Court (1590-1619) / Clare McManus