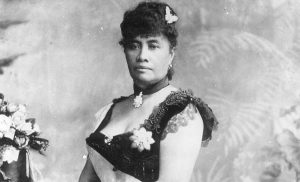 Liliʻ (1838–1917), born Lydia Liliʻ Loloku Walania Wewehi Kamakaʻ, was the first female monarch of Hawaii to reign in her own right. Up until the 1890s, the Kingdom of Hawaiʻ was an independent sovereign state, officially recognized by the United States, the United Kingdom, France, Japan, and Germany. During Liliʻ’s reign, the Overthrow of the Kingdom of Hawaii took place in 1893, when she abdicated “to avoid any collision of armed forces, and perhaps the loss of life”.

Queen Liliʻ is remembered for her many musical compositions, including the famous song “Aloha ʻ” (“Farewell the Thee”). Many of these were written during her imprisonment after she abdicated her throne, and they express a deep love of her land and people. 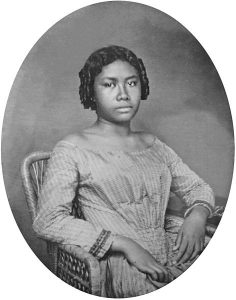 Lydia Liliʻ Loloku Walania Wewehi Kamakaʻ was born, one of 15 children, on September 2, 1838 to High Chiefess Analea Keohokālole and High Chief Caesar Kaluaiku Kapaʻ. Her mother was one of the fifteen counsellors of the king Kamehameha III.

Following Hawai’ian naming practices, Liliʻuokalani’s given name at birth was Lydia Liliʻu Loloku Walania Wewehi Kamakaʻeha. Traditionally, Hawaiʻian parents created new names for their children, giving careful thought to their meaning. Sometimes these names were revealed in dreams or visions. Incidents before or during a child’s birth were considered significant in their naming, as in Liliʻu’s case. Liliʻu’s great-aunt developed an eye infection at the time of her birth, which is why she was given the names “Liliʻu” meaning “smarting”; “Loloku” meaning tearful; “Walania”, “a burning pain”; and “Kamakaʻeha”, “sore eyes”. Though it may seem strange to us, in Hawaiʻian culture these names were not considered bad, ugly, or unlucky; they commemorated the time of her birth.

Liliʻ‘s brother Kalākaua was elected to the throne in 1874, after the previous monarch Lunalilo died without an heir. Kalākaua immediately named his brother Leleiohoku as his heir, putting an end to the era of elected kings in Hawaiʻ. However, Leleiohoku died childless in 1877, so King Kalākaua named their sister Liliʻ as his heir. Kalākaua gave his sister the name “Liliʻ”, meaning “the smarting of the royal ones”.

In 1887, Liliʻ learned that her brother had been forced to sign the 1887 Constitution of the Kingdom of Hawaii. This consitution immediately became known as the “Bayonet Constitution” because of the use of intimidation by armed militia which forced King Kalākaua to sign it or be deposed. The consitution was written by Hawaiian, American, and European anti-monarchists to strip the Hawaiian monarchy of much of its power, instead empowering the kingdom’s legislature and cabinet. Many of those who wrote or backed the constitution saw it as a first step toward the overthrow of the kingdom and the annexation of Hawaii into the United States.

This constitution was never in any way ratified, either by the people, or by their representatives, even after violence had procured the king’s signature to it. Queen Liliʻ 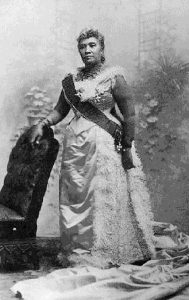 King Kalākaua died after a long illness on January 20, 1891; his final words were, “Tell my people I tried.” Liliuokalani inherited the throne shortly after. Believing she had the support of her hand-picked cabinet, Queen Liliʻ began working to annul the constitution forced onto her people. She started writing a new constitition that would restore the veto power to the monarchy, and voting rights to economically disenfranchised native Hawaiians and Asians.

When they heard of Queen Liliʻ’s new constitution, American and European businessmen and residents started organizing to depose her. They wanted Hawaii annexed to the United States so that their businesses could have the same sugar bounties as domestic producers. In 1893, they formed a “Committee of Safety” to accomplish their goals of overthrowing the Hawaiian Kingdom and deposing the Queen, and the annexation of Hawaiʻ to the United States.

On January 16th in 1893, sailors and marines aboard the USS Boston in Honolulu Harbor came ashore under orders of neutrality. The presence of these troops, ostensibly to enforce neutrality and prevent violence, were effectively a threat to Queen Liliʻ and made it impossible for the monarchy to protect itself.

Liliʻ believed in peaceful resistance. She did not want the blood of Hawaiian people to be shed. Hoping that the US would eventually restore Hawaii’s sovereignty to the rightful holder, the Queen temporarily relinquished her throne to the superior military forces of the United States:

I, Lili’uokalani, by the Grace of God and under the constitution of the Hawaiian Kingdom, Queen, do hereby solemnly protest against any and all acts done against myself and the constitutional government of the Hawaiian Kingdom by certain persons claiming to have established a Provisional Government of and for this Kingdom. That I yield to the superior force of the United States of America, whose Minister Plenipotentiary, His Excellency John L Stevens, has caused United States troops to be landed at Honolulu and declared that he would support the said Provisional Government. Now, to avoid any collision of armed forces and perhaps loss of life, I do, under this protest, and impelled by said forces, yield my authority until such time as the Government of the United States shall, upon the facts being presented to it, undo the action of its representative and reinstate me in the authority which I claim as the constitutional sovereign of the Hawaiian Islands. Queen Liliʻ, Jan 17, 1893

However, Queen Liliʻ’s wish for Hawaii to regain its independence was not to be fulfilled. The Provisional Government, composed of European and American businessmen, refused to reinstate her sovereignty, despite a report commissioned by US President Grover Cleveland’s administration finding her overthrow illegal.

The annexation of Hawaii was delayed by two petitions with over 38,000 signatures representing ninety-five percent of the Native Hawaiian population, and the Queen went to Washington D.C. herself to petition for her cause.

Despite all of this, the Republic of Hawaiʻ was proclaimed on July 4th 1894, with Sanford B. Dole, one of the first people who originally called on the institution of the monarchy to be abolished, proclaimed as President. The Republic of Hawaiʻ was recognized by the United States government as a protectorate (similar to Puerto Rico’s status in modern times). Voting rights were limited to only 4,000, most of them politicians already in power.

Liliʻ herself was arrested on 16 January 1895, accused of being involved in a failed 1895 counter-revolution, though she denied any knowledge or involvement at her trial. She was put under house imprisonment for a year, until in 1896 when the Republic of Hawaiʻ gave her a full pardon and restored her civil rights. 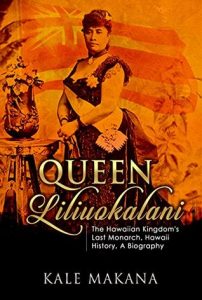 Liliʻ was an incredibly accomplished and prolific musician. She played the guitar, piano, organ, ʻ and zither, and sang alto. She could read and write music, and loved composing songs in her native Hawaiian language.

The Hawaiian people have been from time immemorial lovers of poetry and music[…] To compose was as natural to me as to breathe; and this gift of nature, never having been suffered to fall into disuse, remains a source of the greatest consolation to this day.

Though Liliʻ came from a family of accomplished musicians, she was the most prolific. What distinguished Liliʻ from her family was her huge number of compositions, her ability to notate her songs, and her hard work to perserve and publish them for her people.

I have had more calls for my music than I could possibly supply. An edition of “Aloha Oe,” published by me in Washington this winter, simply for gifts to my friends, is nearly exhausted. No copies have ever been offered for sale; but in response to the very general wish, I have collected a number of my songs, chants, and pieces written or translated by me during the past twenty years or more, and hope soon to put them into the hands of the publisher, so that any stranger desiring to possess samples of Hawaiian music may have that opportunity.

She wrote original compositions as well as notated and translated many traditional Hawaiian songs. She hoped to preserve the musical traditions of Hawaii so that its history and culture would never be lost.

These songs, in which our music circles then excelled, are to be heard amongst our people to the present day. And yet it still remains true that no other composer but myself has ever reduced them to writing.

In her original music, she helped to preserve key elements of Hawaii’s traditional poetry, while mixing in Western harmonies brought by the missionaries. In her musical compositions, she expressed her feelings for her people, her country, and what was happening in the political realm in Hawaii.

Liliʻ dictated in her will that all of her possessions and properties be sold and the money raised would go to the Queen Liliʻ Children’s Trust to help poor and orphaned children. The Queen Liliʻ Trust Fund still exists today, and published a compilation of her works in 1999 titled The Queen’s Songbook.