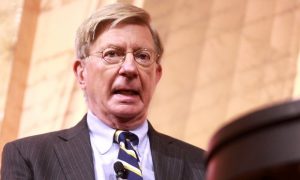 It was only a matter of time before Donald Trump responded to conservative columnist George Will leaving the GOP, and the Republican nominee did so childishly as usual.

While Trump was in Scotland fawning over his new golf course, Will attended a Federalist Society event on Friday and made the shocking announcement that he has left the Republican Party and changed his party affiliation to “unaffiliated.”

“This is not my party,” Will said before urging Republicans to “make sure” Trump “loses.” Republicans will just have to “grit their teeth” through four years of Hillary Clinton and try again in 2020 when they wise up enough to nominate someone who isn’t as offensive as Trump.

Will explained on Sunday that his exodus from the party is the result of Trump viciously attacking Judge Gonzalo Curiel for being of Mexican heritage. For weeks, Trumps has launched racist attacks at the judge, who is overseeing the case against Trump University, and saying that Curiel can’t be fair to him because of what he has said about Mexicans and his support of a wall.

“After Trump went after the ‘Mexican’ judge from northern Indiana then Paul Ryan endorsed him, I decided that in fact this was not my party anymore,” Will told Fox News Sunday.

That was the last straw for Will and he decided to leave the Republican train wreck after decades of supporting the party through thick and thin.

After returning back to the United States from Scotland, however, Donald Trump couldn’t hold his tongue and threw a hissy fit on Twitter about Will dumping the party because of him.

“George Will, one of the most overrated political pundits (who lost his way long ago), has left the Republican Party,” Trump wrote. “He’s made many bad calls.”

George Will, one of the most overrated political pundits (who lost his way long ago), has left the Republican Party.He’s made many bad calls

And George Will had no problem responding by taking a shot at Trump’s knowledge and intelligence.

“He has an advantage on me, because he can say everything he knows about any subject in 140 characters and I can’t.”

One thought on “Trump Lashes Out At George Will For Leaving The GOP, Will’s Response Priceless”