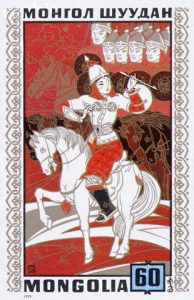 Mandukhai Khatun (1449-1510), also known as Mandukhai Sechen Khatun, was a Mongolian Empress. The word “Khatun” is the female form of the word “Khan”, as in Genghis Kahn.

Born into a family of aristocrats, she married Manduul Khan when she was 18 years old, and bore a daughter, whose name unfortunately isn’t known.

Soon after the death of her husband the Khan, Manduhai adopted the 7-year-old orphan Batmunkh, then the last living direct descendant of Genghis Kahn. Manduhai named him “Dayan Kahn”, meaning “Great Kahn” or “Khan of whole universe”.

When Dayan Khan turned 19, Manduhai married him, again becoming the Khatun or Empress. Older and more experienced than the Khan, she retained great influence over court and military. Together they reunified the Mongol retainers of the former eastern region of the Mongol Empire.

Manduhai fought in battles herself, even while pregnant, and was once injured while carrying twins of Dayan Khan. She and the twins survived, and her army won the battle.

Mandukhai managed to keep Dayan Khan in power as a Chingis Khan’s descendant and defeated the Oirats, actions which have contributed to the legends which formed about her life. She left seven sons and three daughters. The later khans and nobles of Mongolia are her descendants. 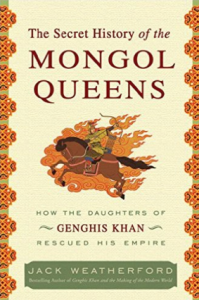 The Secret History of the Mongol Queens: How the Daughters of Genghis Khan Rescued His Empire / Jack Weatherford