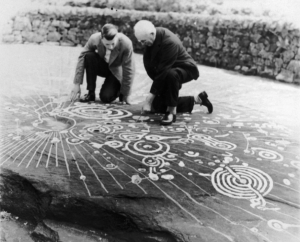 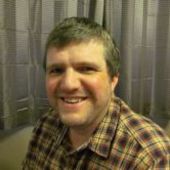 In the foothills of the Kilpatrick Hills, a short walk from the Faifley housing estate and 20 minutes’ drive from Glasgow city centre, there is a huge gritstone outcrop covered in rock art. Domed in the middle, it features dozens of carefully carved circular cup marks and cup-and-ring marks across an area of almost 100 square metres. Dating from the third millennium BC, it is known as the Cochno stone.

It should be one of the most visited and talked about prehistoric sites in Britain. There are hundreds of Neolithic and Bronze Age rock art sites across the country, but the Cochno stone’s scale, complexity and proximity to an urban population make it unique. Yet it is a well kept secret, thanks to a decision in 1965 by the then Ministry of Works to bury it beneath tons of soil and stone. Some 50 years later, we are unearthing it again.

The modern story of the Cochno stone – Cochno means “little cups” in Gaelic – is equal in intrigue to its mysterious prehistoric origins. It began in the 1930s when an account of the site in the Proceedings of the Society of Antiquaries of Scotland caught the attention of the eccentric and tireless amateur archaeologist Ludovic Maclellan Mann. He had already undertaken various excavations of Bronze Age sites in and around Glasgow and had a particular interest in the cosmological meaning of prehistoric rock art. 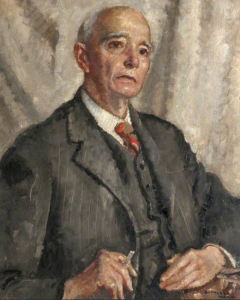 In 1937, the profusion of weird symbols on the Cochno stone inspired in him a burst of well meaning but questionable creativity: he painted the rock surface in various colours. He picked out the cup-and-ring marks in white and covered the stone in a spectacular yellow linear grid of his own devising to try and capture its original cosmological and geometric meaning.

Then as now, there is no consensus among archaeologists as to what the symbols meant to those who carved them. Explanations range from tribal symbols and territorial markers to maps, representations of the stars, and even containers for liquids used in rituals. Similar sites appear across northern Europe, though this is one of the most extensive.

Mann’s work brought media attention to the stone and soon visitors came flocking. Over the next couple of decades, their numbers kept increasing as urban Glasgow crept closer. By the early 1960s, the Cochno stone had become a popular place for local people and children to hang out. There was a growing fashion for visitors to carve marks and names into the soft rock, and lots of people were walking on the surface.

Hence the stone was buried for conservation reasons, ensuring it would remain preserved, frozen in time, waiting for future archaeologists daft enough to dig the whole thing up again. That is where I come in, along with digital heritage specialists from the Factum Foundation. Inspired by The Devil’s Plantation, a 2013 film about occult Glasgow that featured the location, we decided to uncover the Cochno stone, tell its story, and help the local community get back what was taken from them.

Our plan is a compromise: we are going to digitally and photographically record the stone and then create an exact replica that can be placed nearby. This will allow the real Cochno stone to be reburied and this time rest in peace.

With the support of the local council, a private landowner and Historic Environment Scotland, we have just uncovered the whole stone with a small team and a carefully supervised mini-digger, removing several hundred tons of soil. The local fire brigade then cleaned the surface of the stone by spraying some 2,000 litres of water. During the work we have spoken to several people who remember the stone before its burial, and their powerful encounters have helped keep everyone inspired. 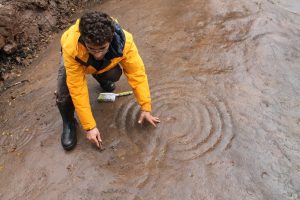 Cleaning a huge concentric circle on site. University of Glasgow

Back from the dead

The results so far are remarkable. Not only can we see the prehistoric cup-and-rings marks again, there are traces of Ludovic Mann’s paint across the stone including his yellow grid. We can also see dozens of pieces of graffiti, from letters and initials to complete names and dates carved into the rock with varying degrees of artistry and care.

As I write, the Factum team is now making digital recordings of the surface using laser scanning and photogrammetry, which involves using photographs to make measurements. This is one of the largest ever high-resolution digital recording projects of a cultural heritage artefact; the scale is so large some of the data will be collected with a drone. The data will enable us to carefully analyse the prehistoric and modern art on the surface and, once we have raised the funds, to create the replica. 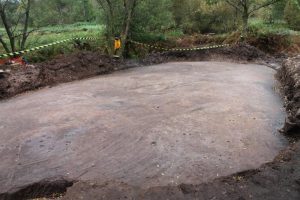 The site excavated. University of Glasgow

It is tremendous to think that one of the most spectacular prehistoric sites in Britain will soon be accessible again to the public. The future of the Cochno stone has perhaps not looked as exciting as this since prehistory. As we continue to puzzle over the mysteries behind this ancient site, we look forward to being joined by Glaswegians and the nation as a whole.