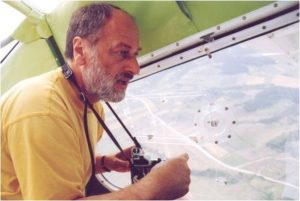 Scrutinizing archives of aerial photography, we have been able to identify as Roman two more walls that will transform our understanding of the frontier of the Roman Empire in Eastern Europe. 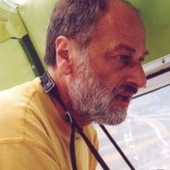 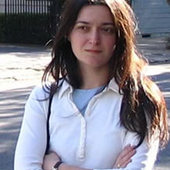 Frontiers like Hadrian’s Wall are central to the study of the Roman Empire. By now we might expect to have discovered most such major landmarks. However, by scrutinising archives of aerial photography, we have been able to identify as Roman two more walls that will transform our understanding of the frontier of the Roman Empire in Eastern Europe.

Aerial photography is the single most important way of finding archaeological sites. Even remains which have been ploughed flat can be visible when ditches or foundations effect the growth of the crops above them, creating what is almost a plan of the buried remains. At least half of all the sites in Britain have been discovered from the air in this way over the last 70 years.

Not all countries have allowed archaeologists the same freedom to fly over the landscape to record such remains. However, many aerial and satellite photographs taken for other purposes, such as military reconnaissance or mapping, are available. These may be found in national or large international archives, such as the Aerial Reconnaissance Archive in Edinburgh and the United States Geological Survey. Such historical archives offer great potential for new archaeological discoveries, but are surprisingly little used.

As part of a programme of mapping the archaeological landscape of Dobrogea in eastern Romania, we have been examining aerial reconnaissance photographs from World War II (both Allied and Luftwaffe coverage). We have also been looking at declassified US military photographs taken by the Corona satellite from the 1960s. The particular advantage of this type of photography is that it shows the landscape as it was before the destructive impact on archaeological remains of later twentieth century development. 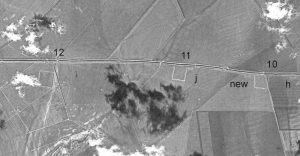 Corona satellite photograph (April 1966 – data available from US Geological Survey) showing the line of the Large Earthen Wall to the west of Constanţa, with forts 10-12 and fortlets h, j and one not previously identified.

Clearly visible on these photographs, cutting across Dobrogea from the Danube to the Black Sea, are three separate, overlapping linear fortifications some 60 km (38 miles) long. Two are made of earth and one partly of stone. When first surveyed in the late nineteenth century, these linear barriers were largely visible as upstanding earthworks. Since that time they have suffered from a combination of urban expansion, infrastructure development and the effects of mechanised agriculture. As a result, large parts of them have been completely destroyed or ploughed flat.

Both the Stone Wall and Large Earthen Wall were originally assumed to be Roman. But since the early 1950s archaeologists have dated them to the early medieval period because of a stone slab with an inscription dated to AD 943 found in one of the associated forts. As a result the fortifications have disappeared from Roman history and have been left almost entirely unexcavated. Our detailed mapping, based on a re-examination of the aerial photographs and other survey evidence, has allowed us to identify new associated fortifications, dismiss some misidentified ones and re-assert the Roman date of these two walls.

The walls have many of the physical characteristics of well-known Roman frontiers, such as Hadrian’s Wall and the Antonine Wall in Britain. The Large Earthen Wall consists of an earthen rampart with a massive ditch to the north. Along its length are a series of at least 32 forts, most of them attached to the rear of the wall. They are very consistent in shape and size, and look like typical Roman forts: square or rectangular with slightly rounded corners, surrounded by an earthen rampart and single ditch. In the best-preserved sectors they are fairly regularly and closely spaced. 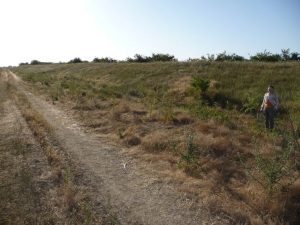 For much of its length the later Stone Wall runs parallel to the Large Earthen Wall, though occasionally diverging from it. Very limited excavation has indicated that its structure was much like Hadrian’s Wall, but slightly narrower. It, too, was provided with a large ditch to the north and had a series of at least 21 forts along its length.

In the absence of modern archaeological excavation it is very difficult to provide precise dates, but the best parallels for the Large Earthen Wall are second century AD. This is supported by what appears to be second to third century AD pottery illustrated in an antiquarian description of one of the attached forts. The provision of external bastions along several fort ramparts on the Stone Wall is more suggestive of a later third or early fourth century AD date for it.

If these assumptions are proved correct – which would require a programme of excavation on the walls – it implies that external threats to the security of imperial borders in this area were far greater and more frequent than current understanding would allow. This in turn would require a full re-assessment of the history and character of the Roman occupation of the region.