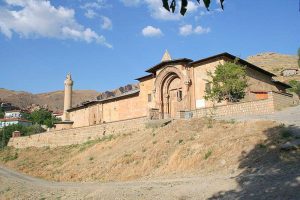 The Paulicians were seeking an area out of the reach of contemporary states. 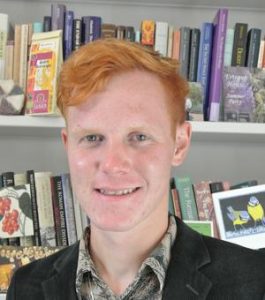 The Çaltısuyu, a tributary of the Euphrates, flows through the dramatic canyons of eastern Anatolia. At around 1,225 meters above sea level, it emerges onto a barren highland plateau overlooked by the crumbling remains of a medieval castle. The small town of Divriği lies on the gentle slope beneath. Although its ornate thirteenth-century mosque has been recognized as a UNESCO World Heritage Site, few tourists make the journey to this remote and mountainous region.

Accessibility is usually something of a prerequisite for the establishment of a new town. Quite the opposite was true for Divriği. This site was first settled around the middle of the ninth century CE by a group of religious dissidents known as Paulicians. The event is recorded by Peter the Sicilian, an Orthodox Christian monk writing in tenth-century Constantinople: “[…] [T]hey went and founded Tefrice [Τεφρική] and lived there. So that at one and the same time [they] might escape the tyranny over them of the Agareni [Arabs] of Melitene, and also, imitating the demons completely in the avoidance of mankind, might be near both Armenia and Romania” (trans. Janet Hamilton and Bernard Hamilton, 91).

The Islamic emirate of Melitene lay to the south of the new Paulician settlement. To the east, the Christian nakharars (lords) of Armenia ruled the valleys and plains of the mountainous southern Caucasus. To the west was the medieval Roman Empire administered from its capital at Constantinople. The Paulicians were seeking an area out of the reach of contemporary states. According to the same source, this refuge attracted not only fellow heretics fleeing persecution but also “the greediest and most licentious and foolish people from the frontier regions” (92).

Around a month ago, I picked up Yale anthropologist Jim Scott’s The Art of Not Being Governed: An Anarchist History of Upland Southeast Asia. It’s a fascinating book, one whose central theses are applicable to many premodern historical contexts. The object of Scott’s study is Zomia, a rugged inland massif covering some 2.5 million square kilometers, stretching from northeast India to southern China, and incorporating parts of Burma, Cambodia, Laos, Thailand and Vietnam. The lowland kingdoms have traditionally seen the approximately 100 million people living in this region as “living ancestors,” Neolithic savages stumbling over the starting line of the race to Civilization. 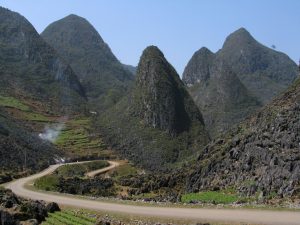 Ma Pi Leng Pass (Vietnam), at the eastern edge of the Zomia, photograph by Jaybeelarsay

Scott begins with an analysis of the limits of state space, suggesting that landscapes that impede travel and communication, such as mountains and marshes, are inherently more difficult to control. His second contention is that the movement of groups and individuals between state and non-state space goes in both directions. The concentration of population in premodern states resulted in high mortality rates from disease and malnutrition, and so such structures have frequently been dependent on coercive or incentivized ingathering of peripheral groups to maintain population levels. The inhabitants of non-state spaces, far from being relics of the Stone Age, are often fugitives from embryonic or expansionist lowland states. Such communities are therefore post-agrarian, post-state, and sometimes even post-literate. Moreover, groups wishing to distance themselves from the state employ social institutions and agricultural technologies that actively prevent their incorporation. Rice is a perfect crop for state building. The need for constant maintenance of the paddies roots the peasant population in place, and the brief annual window in which the grains must be harvested allows for easy appropriation. By way of contrast, the sweet potato, introduced to Southeast Asia from the New World in the sixteenth century, was an immediate hit among the hill communities. Delicious, nutritious and virtually invisible above ground, root crops can be left in the earth for up to two years and harvested at any time. They are fiscally illegible.

The mountains of central Asia Minor present a similarly fractious and state-resistant zone. That Scott’s propositions might be relevant in this landscape was first noted by Peter Thonemann in his essay “Phrygia: An Anarchist History.” He argued that the collapse of the archaic Phrygian state on the plateaux of the Anatolian highlands between the sixth and fourth century BCE ought to be read as a deliberate adaptation to the impositions of Achaemenid Persian imperialism. By the time of the birth of Christ, Asia Minor was nominally under Roman control, and would remain so until the incursions of Seljuk nomads in the later eleventh century. Yet the empire was never able to extend its sovereignty far into the highlands. These remained the domain of “barbarian” peoples, such as the Isaurians of the southern Taurus Mountains. In the sixth century CE, Emperor Justinian attempted to impose imperial control on Tzanica, the mountainous region south of modern Trabzon, through the construction of roads, garrisons, and churches—the most fundamental instantiations of the Roman state. Even in the twenty-first century, many such areas are home to Kurdish guerrilla fighters evading the military might of the modern Republic of Turkey. 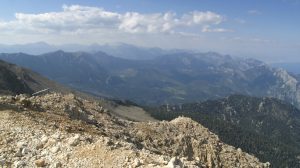 The Tahtalı Mountains in Central Anatolia, photograph by Joonas Plaan

The final chapter of Scott’s book concerns the doctrinally heterodox, millenarian, and militant religious tendencies of the upland peoples of Southeast Asia. In medieval Asia Minor too, the highlands were associated with heresy and religious dissent. Perhaps the most prominent of these dissenting traditions was that of the Paulicians, discussed in some detail by a few texts in medieval Greek and Armenian. That they were a consciously self-reproducing group with an independent literary tradition is clear from some of our Greek sources, which cite texts composed by the Paulicians themselves. They rejected the Orthodox Churches of Constantinople and Armenia and functioned with only a minimalist hierarchy, with no church buildings or distinctions of dress. By the ninth century they were capable of mobilizing large raiding forces from their mountain strongholds. In 870 CE, the Paulician Chrysocheir sacked the city of Ephesus on the eastern shore of the Aegean Sea, stabling his horses in its magnificent cathedral in a calculated gesture of contempt.

There exists a Soviet-Armenian historiographical tradition in which the Paulicians play the role of class-conscious revolutionaries. I have no intention of returning to this rightly discredited model. However, I would like to suggest that Scott’s theses of state evasion through the strategic use of natural geography and heterodox cosmology may be useful in explaining the evident appeal of Paulicianism. Let’s return to ninth-century Anatolia. Warfare was endemic, with annual raids launched from the Arab emirates met by slash-and-burn tactics from the generally smaller Roman frontier armies. In such circumstances, pastoralism, inherently more mobile and therefore better suited to insecure conditions, prevailed over arable farming. Those who grew cereals were exposed not only to hostile raiding parties but also to the Roman taxman. The tax assessment was based on an inflexible ascribed value of the land, rather than the total product produced in a given year. A poor crop invited financial disaster. In addition to these routine dangers, the Anatolian peasantry also faced the threat of mass deportation to Constantinople and its Thracian hinterland. For example, the eighth-century emperor Constantine V ordered the forced transportation of those living in the vicinity of the fortresses of Theodosiopolis and Melitene. The response of the Roman state to heterodoxy might quickly degenerate into indiscriminate violence. In or shortly after 843 CE, the empress-regent Theodora charged a group of noblemen with the task of converting the perceived Paulician minority within the Anatolian population to Orthodoxy. According to the chronicler Zonoras, “they handled their commission clumsily and to no avail, and not merely wasted their labour but drove the entire people (who number many thousands) to apostatize” (Hamilton and Hamilton, 63).

The sack of Ephesus in 870 was too great a provocation to ignore. Within two years, Roman field armies had captured and destroyed the settlement at Tephrike (Divriği). The Paulician leader Chrysocheir was killed, though his name would survive in the oral epic poetry of the frontier region. Nevertheless, before his death he had made a highly unusual demand of the Roman state. Military uprisings in this period were not uncommon. Typically, the leader of a rebellion, such as Thomas the Slav in 821–23, would declare themselves emperor and march their troops to Constantinople. What Chrysocheir demanded was the secession of the eastern provinces from Constantinopolitan control. Modern historians have often described Tephrike as the capital of a Paulician state. While I do not wish to suggest that the sect was aiming to create an anarchist utopia, I would contest the simplistic deployment of this term. It was not simply the case that Paulicians were attracted to remote places in which they might practice their religion without fear of violence. Those who sought to evade the state would also have been attracted to Paulician refuges, where the art of not being governed was being practiced with remarkable effectiveness.

Originally published by the Journal of the History of Ideas under a Creative Commons Attribution-NonCommercial-ShareAlike 4.0 International License license.