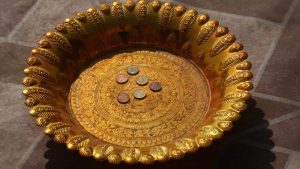 Donald Trump has repeatedly pledged to make conservative Christians more politically powerful by eliminating legal restrictions on churches’ and other tax-exempt nonprofits’ ability to do electoral work. On Wednesday two Republican congressmen, House Majority Whip Steve Scalise and Georgia’s Jody Hice, introduced H.R. 6195, what they call the “Free Speech Fairness Act,” which would lay the groundwork for a President Trump to do just that.

Scalise and Hice were joined at a press conference in the U.S. Capitol by Family Research Council President Tony Perkins, Alliance Defending Freedom legal counsel Christiana Holcomb, and anti-gay activist and pastor Harry Jackson. According to a handout, the bill or the policies represented in it are also supported by Focus on the Family, the Heritage Foundation, the Evangelical Council on Financial Accountability, March for Life Action, Liberty Counsel and Liberty Counsel Action, the American Center for Law and Justice, and the Home School Legal Defense Association.

Trump has said he decided to call for repeal of the Johnson Amendment, which dates to 1954, when he heard from pastors that it restricted their ability to help him get elected. He has made it clear that he sees its repeal as a way to build Christian conservatives’ political muscle. So it was a bit unconvincing to have Scalise and Hice portray their legislation not as a vehicle for turning churches into more effective political machines, but merely an effort to protect the trampled-upon free speech rights of pastors and nonprofits.

Scalise and Hice say their bill would allow churches and nonprofits to make political statements if those statements are in the ordinary course of their regular work and any expenses related to them are de minimis. In their example, a preacher could endorse a candidate as part of a sermon, and a church could do the same in its normal newsletter. Under their rules, they say, the church couldn’t launch a new political direct mail campaign that is outside the normal scope of its work. But given the massive communications networks that many megachurches and nonprofit religious broadcasters have, this seems like more of a fig leaf than an actual limitation.

Before coming to Congress, Hice was a pastor in Georgia. He said he was one of 33 pastors who challenged the Johnson Amendment back in 2008 with the help of ADF, a challenge that grew into “Pulpit Freedom Sunday,” an annual project that encourages pastors to violate legal restrictions by endorsing candidates from the pulpit and daring the IRS to come after them. Not coincidentally, this year’s Pulpit Freedom Sunday is this weekend, October 2.

Speakers at this week’s press conference portrayed the Johnson Amendment as a dire restriction on free speech and religious liberty. ADF’s Holcomb said it has had “devastating impacts on religious freedom and the freedom of speech.” Hice said it is “unconscionable that our government would force individuals to choose between their constitutionally protected rights or their faith.”

Perkins quoted Martin Luther King Jr. at the press conference, and his commentary on the new bill at the Heritage Foundation’s Daily Signal features a large photograph of King. []Jackson also cited the civil rights movement. But the example of King actually undermines their hyperbolic claims about Johnson Amendment, which was in effect in the late 1950s and 1960s when African American pastors and churches served as moral and logistical focal points for the civil rights movement. They were not “muzzled” any more than conservative megachurches have been “muzzled” in speaking out about abortion for the past 40 years or rallying their members to vote against equality for LGBT people.

Under the existing IRS rules, the Family Research Council has no problem communicating on the issues of the day with the 11,000 pastors in its network. Indeed, there are currently multiple voter registration and GOTV operations being carried out by Religious Right networks through conservative evangelical churches. Trump and other Republican presidential candidates have appeared before gatherings of pastors brought together by Christian nationalist David Lane, who has recruited hundreds of pastors to run for office.

Their First Amendment freedoms are quite intact. But they’re looking for more—the ability of churches, religious broadcasters and other nonprofits to engage in direct electoral advocacy with tax-exempt funds. Speakers at Religious Right conferences routinely blame what they see as America’s moral decline on timid preaching, and they blame that on pastors who are intimidated by the IRS or hide behind the supposed threat of the IRS to avoid taking strong political stands. Charisma’s Bob Eschliman even said in praising the new bill that the Third Great Awakening—a national spiritual revival longed for by Religious Right leaders—cannot come about until the nation’s pulpits are “unshackled from the Johnson Amendment.”

Perkins, who is honorary chairman for Pulpit Freedom Sunday, bragged about the fact that he worked with the Trump campaign to get language calling for repeal of the Johnson Amendment into the Republican Party platform. He praised Trump for making it a campaign issue, adding, “I hope the next time that I’m talking about this could possibly be as he’s signing it behind his desk as president.”