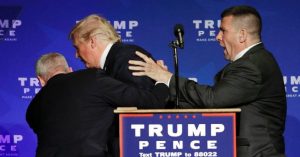 Donald Trump is rushed off stage Saturday night by Secret Service at a rally in Reno, Nev. Though Trump later returned to the stage to complete the event, the protester who was attacked by Trump supporters says he could have died after the Republican candidate said: “Okay. Take him out.” (Photo: John Locher/AP)

A fracas at a Donald Trump rally captured on live television Saturday night saw the Republican candidate whisked off the stage by Secret Service agents and left those watching perplexed by what happened in the front rows as police in military gear appeared on the scene with one man ultimately led away by officials.

ut while one of his sons joined another top campaign aide in “irresponsibly” and falsely suggesting it was an assassination attempt against Trump, the man at the center of the incident says that all he did was hold up a sign reading “Republicans Against Trump” before being tackled and beaten by those around him at the rally.

Speaking with the Guardian following the event, the man, who identified himself as Austyn Crites from Reno, said it was the hysteria of his fellow Republicans at the rally—and incitement by the presidential candidate himself—which turned a simple gesture of dissent into a much more dangerous situation.

“I just went with sign that said ‘Republicans Against Trump,'” Crites told the Reno Gazette-Journal. “It’s a sign that you can find online. I held up the sign and initially people around me were just booing me telling me to get out of there. Then a couple of these guys tried grabbing the sign out of my hands.” He said he had no intentions other than to let his opinion be known. He expected to be booed and perhaps led away, but not pummeled nearly to death.

“Multiple people just tackled me down, kicking me choking me and just beating me up,” he said. “That’s when things even got crazier. I was on the ground and people were holding my arms, legs and I kept saying I can barely breathe. I was turning my neck just to get a little bit of air to keep from passing out.”  The police, he said, intervened just in time.

According to the Guardian:

The 33-year-old – who says he has been a registered Republican for about six years – said he was kicked, punched and choked, and feared for his life when the crowd turned on him at the gathering in Reno, Nevada.

Crites cited Trump’s treatment of Mexicans, Muslims and women as the reason he decided to protest again Trump, who he described as “a textbook version of a dictator and a fascist”.

There were panicked scenes at the Trump rally, apparently prompted by shouts from at least one person in the crowd that the protester had a gun.

Hundreds of people fled to the the back of the auditorium in panic as Trump was hurriedly rushed from the stage by his security detail.

As the following clip of the unfolding incident shows, Trump acknowledges someone in the crowd during his remarks, saying, “Oh we have one of those guys from the Hillary Clinton campaign. How much are you being paid, $1,500?” As the crowd begins to agitate and boo, Trump then says, “Okay. Take him out.” Just seconds later, as the scuffle appears to intensify, is when agents quickly approach Trump and take him off stage.

After Crites was removed from the event by security and police, Trump returned to the stage and told his supporters. “No one said it would be easy.”

Though Republicans and Trump supporters on social media overnight were calling him a “thug” “infiltrator” and “Clinton shill,” Crites posted a Facebook message (subsequently deleted) which said he has nothing official to do with the Clinton campaign, though he is supporting the Democratic candidate this year over Trump and has donated to her campaign.

“Take what happened to me tonight,” Crites wrote to his fellow Republicans in the post, “as a classic example of dictator incitement of violence — against your own Republican brother with a stupid sign.”