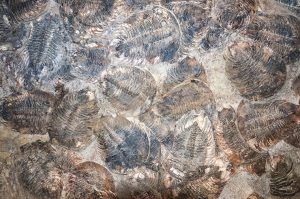 Washington University researchers were part of a team that studied findings from the Ordovician Period that produced fossils like these. Using a variety of methods, the research team found how oxygenation appears to be a tremendous driver of the growth in life known as the Great Ordovician Biodiversification Event. 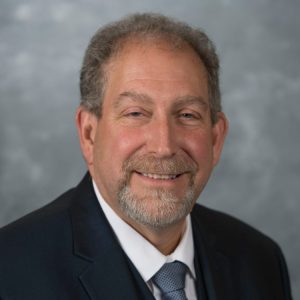 Oxygen has provided a breath of fresh air to the study of the Earth’s evolution some 400-plus million years ago.

A team of researchers, including a faculty member and postdoctoral fellow from Washington University in St. Louis, found that oxygen levels appear to increase at about the same time as a three-fold increase in biodiversity during the Ordovician Period, between 445 and 485 million years ago, according to a study published Nov. 20 in Nature Geoscience.

“This oxygenation is supported by two approaches that are mostly independent from each other, using different sets of geochemical records and predicting the same amount of oxygenation occurred at roughly the same time as diversification,” said Cole Edwards, the principal investigator of the study conducted when he was a postdoctoral fellow in the lab of the paper’s senior author, David Fike, associate professor in Earth and Planetary Sciences in Arts & Sciences.  The other authors are Matthew Saltzman of Ohio State University and Dana Royer of Wesleyan University in Connecticut.

“We made another link between biodiversification and oxygen levels, but this time during the Ordovician where near-modern levels of oxygen were reached about 455 million years ago,” said Edwards, assistant professor in geological and environmental sciences at Appalachian State in Boone, N.C. “It should be stressed that this was probably not the only reason why diversification occurred at that time. It is likely that other changes — such as ocean cooling, increased nutrient supply to the oceans and predation pressures — worked together to allow animal life to diversify for millions of years.” 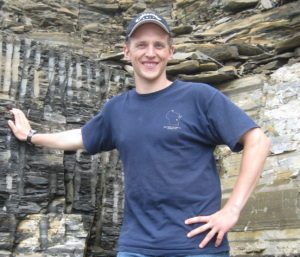 This explosion of diversity, recognized as the Great Ordovician Biodiversification Event, brought about the rise of various marine life, tremendous change across species families and types, as well as changes to the Earth, starting at the bottom of the ocean floors. Asteroid impacts were among the many disruptions studied as the reasons for such an explosion of change. Edwards, Fike and others wanted to continue to probe the link between oxygen levels in the ocean-atmosphere and diversity levels of animals through deep time.

Estimating such oxygen levels is particularly difficult: There is no way to directly measure the composition of ancient atmospheres or oceans. Time machines exist only in fiction.

Using geochemical proxies, high-resolution data and chemical signatures preserved in carbonate rocks formed from seawater, the researchers were able to identify an oxygen increase during the Middle and Late Ordovician periods — and a rapid rise, at that. They cite a nearly 80-percent increase in oxygen levels where oxygen constituted about 14 percent of the atmosphere during the Darriwilian Stage (Middle Ordovician 460-465 million years ago) and increased to as high as 24 percent of the atmosphere by the mid-Katian (Late Ordovician 450-455 million years ago). 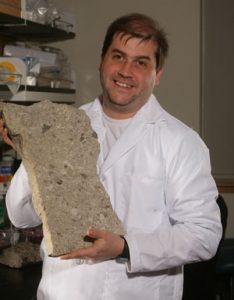 Fike holds a 443-million-year-old slab of Ordovician limestone from Anticosti Island in Quebec that is sprinkled with the fossilized remains of marine creatures killed during a cooling pulse. (Photo: Jerry Naunheim Jr., Washington University)

“This study suggests that atmospheric oxygen levels did not reach and maintain modern levels for millions of years after the Cambrian explosion, which is traditionally viewed as the time when the ocean-atmosphere was oxygenated,” Edwards said. “In this research, we show that the oxygenation of the atmosphere and shallow ocean took millions of years, and only when shallow seas became progressively oxygenated were the major pulses of diversification able to take place.”

The chemical signatures that served as proxies for dissolved inorganic carbon included data from geologic settings ranging from the Great Basin in the western United States, to the northern and eastern U.S., to Canada and its Maritimes, as well as Argentina in the Southern Hemisphere and Estonia in the Eastern Hemisphere. Nevada, Utah, Oklahoma, Missouri (New London north and Highway MM south of St. Louis), Iowa, Ohio, West Virginia and Pennsylvania were among the data points across the U.S.

The researchers concluded that it remained unclear whether the increased oxygenation had a direct effect on animal life, or even if it had a passive effect by, say, expanding the oxygen-rich ecospace. So it is difficult to resolve if temperature, increased oxygenation or something else served as the driver for biodiversification. But the findings showed that oxygen certainly was spiking during the times of some of the greatest change.

“Oxygen and animal life have always been linked, but most of the focus has been on how animals came to be,” said Saltzman, professor and school director of Earth Sciences at Ohio State. “Our work suggests that oxygen may have been just as important in understanding how animals came to be so diverse and abundant.” 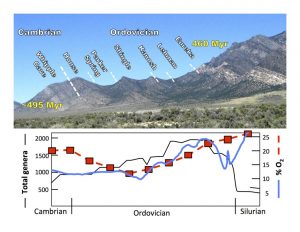 The photograph shows the Shingle Pass section in east central Nevada, where late Cambrian to Middle Ordovician (460 to 495 million years ago) limestone rocks are exposed. These strata were sampled for carbon and sulfur isotopic analysis in order to estimate atmospheric oxygen levels based on certain isotopic trends. At Shingle Pass, oxygen levels do not appear to increase until near the end of the evolving section (460 million years ago), and perhaps this is just about the spot where an abundance of macro fauna fossils begin to be seen, such as trilobites, corals and cephalopods. In the graph, the red line represents modeled oxygen levels using carbon and sulfur isotope trends from carbonate rocks, the blue line represents modeled oxygen levels using paired carbon isotopic data from carbonate rocks and organic matter, and the black line represents global biodiversity levels. (Graphic: Cole Edwards)