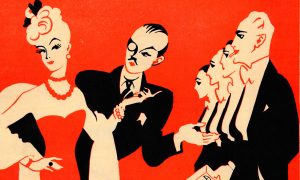 We all know what the humanities are. They are the branches of learning that have to do with culture, people, history, language, ideas – and, above all, books. For books are what distinguish the humanities from the other ways of getting at those human endeavours. Social scientists, after all, chase after the same human stuff, but they do their work with studies, surveys and archaeological digs. The moment that scholars start looking primarily to books for the answers, they become humanists. Old, new, graphic, literary, long, short – doesn’t matter: books are to humanists what bugs are to entomologists.

But this rough-and-ready grasp of the humanities leaves out a significant group: namely, the philosophers, or at least the majority of them in the Anglophone world. For even though they write and read a lot of books, most philosophers aren’t as excited about them as the other humanists are. You can see this at academic cocktail parties, where the philosophers are more likely to hang out with the physicists than with the literary critics. Physics and philosophy are both problem-driven disciplines, where theories are proposed and held up for public refutation, all with an eye toward getting at How Things Really Are, history and niceties of language be damned. From a certain altitude, the approaches of philosophers and physicists look the same; the only difference is that physicists stop at the limits of what they can test, and philosophers try to go further.

What problems are these philosophers concerned with solving? Well, the great big traditional ones, to be sure: does God exist? Do we have free will? What is the nature of causality? What does morality demand of me? And so on. It’s just that, when philosophers grapple with these problems, they turn not to long shelves of books, but to the things themselves. By exerting their imaginations and their talent for coming up with pesky counterexamples, they probe away at the conceptual boundaries of God, free will, morality, etc, and try to determine, by the power of thought experiments alone, just what is and isn’t possible, and what conclusions are the most reasonable.

It’s a different method altogether from that of the other humanists. Say the word ‘justice’, and humanists will scramble toward the ways in which that word has been deployed over the centuries, in a thousand interesting texts. We will soon see quotations from Hugo Grotius, Samuel von Pufendorf, Bernard Mandeville, Montesquieu – and that’s all before we get to the lesser-known thinkers. Contemporary philosophers, on the other hand, are much more likely to skip the history and begin with a formula such as: ‘Principle P is just if and only if _____’, and start sorting through promising ways of filling in the blanks, armed only with their critical minds and literature that goes back no further than a generation. The humanists see our local remarks in the context of a very long conversation, and they do not believe that we can really know what we are talking about without some sense of the long story. Philosophers would rather just skip the long story (TL; DR) and drive straight at the thing itself. For why think that a close study of what all those forgotten dead guys thought will tell us what we should believe today?

I’m exaggerating – but only a bit. The main point is that, while the other humanists think that the long story is the goal, most contemporary Anglophone philosophers (for short, ‘analytic philosophers’) think that a well-defended theory which solves problems is the goal. While a humanist might say: ‘But, look, there is no way to understand John Locke’s political philosophy without considering his connections to the tobacco plantations of Carolina ,’ a philosopher will retort: ‘Sure there is! For see – he offers arguments, with premises that are supposed to deliver a conclusion. If his argument is sound, it will stand on its own; if it was good only for his context, then who cares?’ And thus, by logic, Locke stands or falls.

In his book Philology (2014), James Turner provides a valuable history of the humanities as descendants of that venerable study of words, philology. And it is not for nothing that he decides to leave out philosophy:

For most of this long evolutionary history, philosophers understood their studies as the opposite of philology, rhetoric, and antiquarianism. Philosophy was logical, deductive, precise in conclusions, dismissive of change over time. Philology was interpretive, empirical, treating in probabilities, drenched in history. For much of the past two and a half millennia, starting with Plato, philosophers snickered at philology and rhetoric when not castigating them. Hostilities have cooled in recent centuries, but basic natures did not alter.

Yikes. Coming from a scholar who has written such a thorough book on the subject, this does strongly suggest that, whatever philosophy is, it does not belong in the humanities.

The philosophers can learn a lot from the humanists about the importance of context and culture. Philosophers should recognise that the particular problems they are concerned with – causality, God, mind, morals, etc – do not drop into their laps from Plato’s heaven. They come at us out of that long story that the humanists keep going on about. The ways in which we now talk about moral and metaphysical beings have been shaped by conversations that go back centuries. And the more one looks into this long story, the more each problematic term scatters into multiple versions. What is a mind? If you ask René Descartes or George Berkeley, it is a theatre of representations. If you ask a German idealist, it is some sort of social structure that changes over time – a Zeitgeist – with a final end. If you ask David Hume, Sigmund Freud or James Joyce, the mind is a messy jumble of words and impressions that cannot be teased apart easily from bodies and things. All the things we’re liable to say about mind could well carry traces of any of these notions. And matters get only more complicated when we throw Laurence Sterne, Jane Austen or Marcel Proust into the mix. To trade in this rich complexity for some simplistic notion of ‘the’ mind is like looking for a lost key under the lamp post – not because you think you lost it there, but only because the light is better.

The humanists, on the other hand, can learn from the philosophers that, while context is important, it isn’t everything. When humanists pick up old volumes of Michel de Montaigne or Friedrich Nietzsche, and seek to interpret and understand, it cannot merely be a matter of our stepping into their dusty worlds. We should also be pulling those texts into our worlds, asking our questions, and insisting that those texts make sense to us. Philosophers have a talent for illuminating the problem spaces of problems: what the consequences of claims are, what strategies lead to dead ends, and which tactics might just work. Placing some difficult old book into a philosophical problem space pushes us not merely to raise the dead, but to make them sit up and answer for themselves. (Anyone who has survived a Socratic cross-examination knows what I’m talking about.)

So philosophers should join the party, and humanists should welcome them for what they bring. In trying to understand ourselves – and isn’t that the prize sought by humanists and philosophers alike? – we need every tool we can lay our hands on. We need the sensitivity to context so ably generated through history, literary studies and all the philological disciplines. And we need the sharp-edged critical analysis wielded with precision by philosophers. Who knows? With some broadmindedness, and some effort to steer cross-disciplinary conversations in promising directions, we might come across some questions we didn’t even know we had. And that, in any learned field, is exactly what progress looks like.