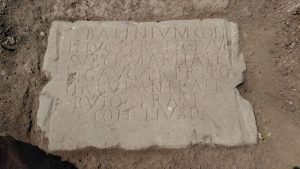 The newly found inscription provides invaluable information about the construction of the Roman thermae in the Ancient Thracian city of Kabyle during the reign of Emperor Marcus Aurelius. Photo: Yambol Regional Museum of History

An intact Ancient Roman inscription in Latin dating back to the reign of Emperor Marcus Aurelius (161 – 180 AD) has been found by archaeologists during the ongoing excavations in the large Ancient Thracian and Roman city of Kabyle.

The new find is the first fully preserved Ancient Roman inscription to be discovered in Kabyle in the past 35 years, i.e. since 1983, Stefan Bakardzhiev, Director of the Regional Museum of History in the city of Yambol, has announced.

The Ancient Thracian and Roman city of Kabyle (Kabile) is located on the southeastern slope of a tall hill known as Zaychi Vrah (“Rabbit’s Mount”) at a curve of the Tundzha River.

Kabyle was first established as a settlement at the end of the 2ndmillennium BC, and had a rock acropolis shrine on the hill’s top.

It was a major Ancient Thracian city which served as a residence of the early kings of the Odrysian Thracian Kingdom (5thcentury BC – 1st century AD), and was a crucial Roman military camp in the Late Antiquity period.

All of Ancient Thrace south of the Lower Danube, including what had been left of the Odrysian Kingdom (5th century BC – 1stcentury AD), probably the most powerful kingdom of Ancient Thrace (which had been reduced to a client state of Rome by the early decades of the 1st century), was conquered by the Roman Empire in 46 AD. The Thracian aristocracy and population become well integrated in the Roman society.

The Thracian (Getian / Dacian) regions north of the Lower Danube were conquered by the Romans under Emperor Trajan (r. 98-117 AD) in 106 AD, and were lost in 271 AD, while the rest of Ancient Thrace, south of the Danube, remained part of the Roman Empire and later the Eastern Roman Empire (Byzantium) up until the expansion of the First Bulgarian Empire (632/680-1018) south of the Danube in 680-681 AD.)

The newly discovered Ancient Roman inscription in Kabyle consists of seven lines. Its Latin letters are engraved on a stone slab, which is 60 centimeters (2 feet) tall and 80 centimeters (2.6 feet) wide.

The Roman inscription refers to the construction of the Roman thermae (public baths) in the city of Kabyle in 166 – 169 AD.

The Kabyle thermae were built by the Cohors II Lucensium (Second Lucensian Cohort), Roman military unit based in the Thracian city at the time. The unit was commanded by prefect (praefectus) named Elius Rufus.

The stone slab itself has been found near the principia (plural of principium), the building for the command staff of the respective Roman military unit.

“All in all, the inscription’s translation reveals that the thermae in Kabyle were built by the Cohors II Lucensium (Second Lucensian Cohort) at the time when the Thracia province was governed by Governor Appius Claudius Martialis,” Bakardzhiev has told the BNT TV channel.

“During this period, [the Roman Empire] was ruled by Emperor Marcus Aurelius, and the construction was carried out under the supervision of the commander of the Second Lucensian Cohort, Aelius Rufus,” the archaeologist elaborates.

During their 2017 excavations, the team of the Yambol Museum, which also includes archaeologists Miroslav Kozarev and Yavor Rusev, excavated the residence of the prefect (commander) of the Roman cohort based in Kabyle, while their new digs in 2018 are focused on the principia of the city. 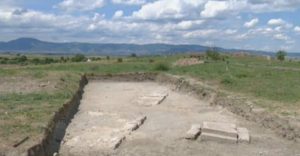 The exposed ruins of the Roman principia of Kabyle in the late 2nd century AD where the Latin inscription has been found. Photo: TV grab from BNT

Until the new discovery of the Roman inscription from the principia, the archaeologists only knew that the Cohors II Lucensium (Second Lucensian Cohort) arrived in Kabyle in 136 AD.

However, they have had no information whatsoever about the construction activity of the military unit.

“The discovery of this inscription is further evidence that we are indeed excavation the staff of the Roman military unit based in Kabyle,” Bakardzhiev has emphasized. 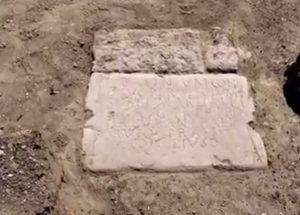 The newly discovered Ancient Roman inscription reveals the Roman military unit based in Kabyle built the public baths there in the 160s. Photo: TV grab from BNT

The newly found inscription is the fourth one ever found in Kabyle to provide information about the Roman construction works in the originally Ancient Thracian city.

“Up until now, we were not aware of the time when the Roman thermae of Kabyle were constructed,” the Yambol History Museum director says.

For the past four seasons, the excavations in the Ancient Thracian and Roman city of Kabyle have been carried out with funding from Yambol Municipality; after July 2018, they are set to continue with funding from Bulgaria’s Ministry of Culture.

The archaeologists hope to be able to exhibit in situ the structures that they have discovered during the past couple of years, including the principia and the prefect’s residence.

In 2016, the archaeologists discovered a previously unknown Late Antiquity quarter of the large Ancient Thracian city of Kabyle demonstrating that it flourished in the Late Roman Period.

Another Ancient Roman inscription, but from 303 AD and dedicated to Roman Emperor Diocletian, was discovered recently in Bulgaria’s Plovdiv.

As part of its efforts to promote cultural tourism, in addition to Kabyle, Bulgaria’s Yambol has also restored with EU funding its 16th century Ottoman covered market, the so called bedestan.

After the collapse of Alexander the Great’s empire, in the 3rd century BC, Kabyle was ruled once again by the Ancient Thracians. It was conquered by the Roman Empire in 71 BC, and was later incorporated into the Roman province of Thracia (Thrace). It was an important regional center in the Late Antiquity as well. The city of Kabyle was modeled after the Ancient Greek cities at the time. It boasts a stone acropolis with a unique rock relief of the ancient goddess of Cybele, a protector of the city. In the 4th century AD, Kabyle was conquered by the Goths, and was later destroyed for good by the Avars.

Kabyle is located on the southeastern slope of a tall hill known as Zaychi Vrah (“Rabbit’s Mount”) at a curve of the Tundzha River, with a rock acropolis shrine on the hill’s top. It stood at the crossroads of several major ancient roads, and the fact there is no modern-day settlement built on top of it makes the Ancient Thracian city a fruitful place for archaeological research and cultural tourism.

Kabyle was declared an archaeological site by the Bulgarian authorities in 1927; in 1969, it was granted the status of a monument of culture of national importance, and a national archaeological preserve, and in 1979, it was made part of a nature preserve. The Kabyle Archaeological Reserve has a territory of 650 decares (160 acres). It features ancient structures such as the agora (a central square), Roman barracks, Roman thermae, a bishop’s basilica, among others. Kabyle is excavated every year by archaeological teams from Bulgaria and abroad.