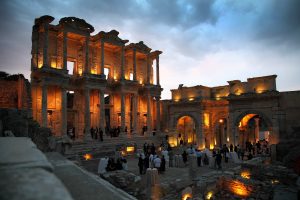 How were books stored and accessed in the ancient world? Matthew Nicholls explores what the surviving evidence of ancient books can tell us about libraries in antiquity. 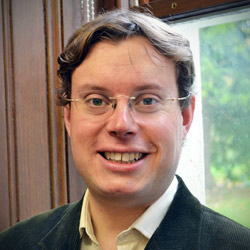 The British Library holds many fragments of ancient books which can tell us something about how Greek literature was written down, read, and transmitted, from individual books to large libraries like the famous library at Alexandria.

Alphabetic writing entered the Greek world in the 8th century BCE from the Levant, adapting a script system developed by the Phoenicians and spread by their traders and travellers.  While various forms of writing surface were used, including inscriptions on stone or bronze and wooden and wax tablets for note-taking and record keeping, literary books (when a written literature developed from around the 7th century BCE) were usually in the form of papyrus scrolls. This had become the dominant book form by the 7th–6th centuries BCE, with a book trade and substantial book collections attested in the 5th–4th centuries BCE (the ‘golden age’ of Classical Athens).

By the 3rd century BCE large royal libraries, including the famous library of Alexandria, were collecting and organising thousands of these books. As the Roman Empire absorbed the territory and cultural practices of the Greek world from the 2nd century BCE onwards, Rome in its turn developed large public libraries as well as rich private book collections.

Papyrus scrolls: their use and storage

Although few actual books or fragments of books survive from that long ago, or from the Greek mainland, depictions on vases and finds of later ancient Greek books, especially in the arid preservation conditions of Egypt, mean that we have a clear idea of what they looked like and how they worked. They were long rolls of a type of ‘paper’, made by pressing together strips of the fibrous stem of the Egyptian marsh plant papyrus. When dried and smoothed, they were written on in ink (always by hand: there was no printing in the ancient world), and rolled up around a winding boss. They could be stored in a slip case or book box for transport, and were shelved laid flat.

The Aristotelian Constitution of the Athenians is preserved almost intact on four papyrus scrolls, copied around 100 CE (Papyrus 131) / British Library

This set of four scrolls from Greek-speaking, Roman-administered Egypt provides a good example of ancient books of ‘average’ quality. Like many of the book fragments that have been found in Egypt, they were originally relatively unglamorous objects, ending up as waste paper, but they transmit precious texts that would otherwise be lost to us. These rolls contain farm accounts but were reused at some point in the 1st century CE to accommodate commentaries on Demosthenes (384–322 BCE) and Callimachus (c. 305–c. 240 BCE) and, most importantly, the Constitution of the Athenians, a 4th-century BCE work attributed to Aristotle (384–322 BCE), written onto the blank side of the valuable papyrus. The text is organised in columns, each of which would be visible to the reader as they wound the scroll from right to left (winding side to side, not top to bottom). The Constitution of the Athenians, for example, occupies 36 columns of text split across four rolls.

This arrangement in columns is typical for a papyrus scroll, each of which could have held (on average) about 1500 lines – enough for a Greek tragedy, say, or a book or two of a prose work. This meant that larger works, such as narrative histories or the treatise preserved here, needed to be divided up between multiple scrolls. We can sometimes detect the effect of this physical division on the content of the work, when a writer like Tacitus (c. 55–after 117 CE) leaves us on a cliffhanger or resumes a new volume with a definite ‘turning point’.

Within each volume, this type of Greco-Roman book did not have many of the reader aids we associate with the codex book (such as page numbers, an index and contents page, and the ability to open and shut the book at any point in the text), and the writing within it often lacked punctuation, word spacing, and the many typographic conventions used to make a modern reader’s job easier.

However, we can find some aids to the reader or user, both within individual volumes and (probably) within the books on an ancient library shelf. For example, the first column on the first scroll of the Constitution of the Athenians papyrus is marked with the Greek letter A, meaning ‘[book] 1’ of the four-volume set. 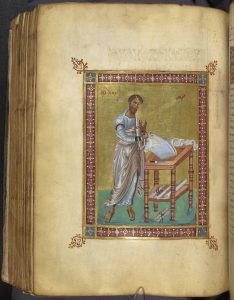 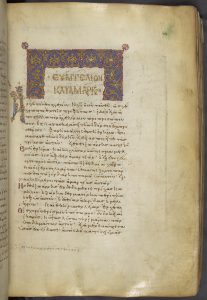 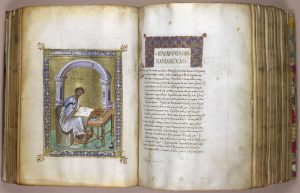 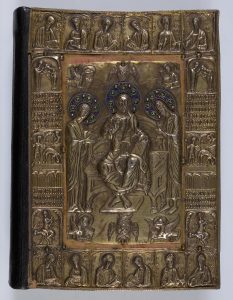 A 10th-century image of St Luke, which is probably based on earlier examples (given the Classical dress and book forms), shows the evangelist in the act of writing on a scroll and perhaps lets us imagine some of the equipment of an ancient book-producer or library.

Although literary composition in the Greco-Roman world was more normally done in notebooks or tablets, the evangelist (writing under divine inspiration) is writing directly onto the papyrus scroll that was usually reserved for the final, finished copy. St Luke’s flat table, bundle of pens and inkwell, and knife (used for sharpening a quill or reed pen) are perhaps the sort of equipment that ancient library copyists would have used; other scrolls are laid flat on the lower shelf of the table. 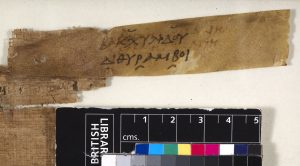 A 2nd-century papyrus fragment of Bacchylides retains its parchment label, used to identify the volume on a bookshelf (Papyrus 2056) / British Library

A library reader approaching a bookshelf, or even rummaging on the lower deck of St Luke’s table, would need to be able to identify the contents of the books they found there without having to unroll them all. This fragment shows how this could be done: a parchment ticket is glued to the edge of the papyrus scroll, and would stick out to show the reader what it contained (the Greek word for the ticket is sillybos, giving us our word ‘syllabus’ for the contents of a course).

In this case the roll contained the Dithyrambs of Bacchylides, a Greek lyric poet of the early 5th century BCE. Letters from the Roman statesman and author Cicero (106–43 BCE) to his literary friend Atticus (c. 110–32 BCE) include details of the work done by their library slaves on adding such sillyboi to Cicero’s own library, and arranging and shelving its contents.

We might imagine then, that Greek libraries used sillyboi like these to make their books accessible to readers, whether they browsed the shelves directly or used library personnel to fetch their books (we do not know which).

Although Greek individuals, philosophical schools, and gymnasia all had book collections, the most famous were the libraries established by the rival monarchs of the Hellenistic period, the era following the death of Alexander the Great in 323 BCE during which his huge empire dissolved into competing kingdoms.

The library at Alexandria, founded by the first king of the Ptolemy dynasty around the start of the 3rd century BCE, eventually grew to house (at least) tens of thousands of volumes, acquired by a combination of skilful collection, diplomacy, purchase, and force. The scholar-librarians who ran and worked at this library developed many bibliographical tools and techniques that we still use – from alphabetical order and punctuation to the commentary, glossary, critical edition, and grammar.

Alexandria’s royal library was a serious scholarly institution, then producing (among other things) an important classification of Greek literature (Callimachus’ Pinakes or tables of the early 3rd century BCE) and multiple critical editions of the poetry of Homer in particular. However, it was also an important element in the royal self-presentation of the Ptolemies, proving their fitness to rule as members of an educated, Greek-speaking, Homer-reading eastern Mediterranean elite.

Extravagant library collection became a proxy for competition with other dynasties, such as the Attalids of Pergamum. The Roman encyclopaedist Pliny (23–79 CE) tells us that when this dynasty established its own library, the Ptolemies embargoed the export of papyrus from Egypt to stop it making any new books.

This dual power of library collections, to transmit and stimulate literary activity but also to signal power and prestige, was attractive to the Romans who conquered Egypt in 30 BCE (having already acquired Pergamum in the previous century). Rome’s first emperor Augustus (r. 27 BCE–14 CE) set a precedent, filling Rome with no fewer than three public libraries by the end of his reign. Rich Graeco-Roman provincials followed his lead, establishing public libraries across the cities of the eastern Roman Empire as signs of their own wealth, acumen, and connection to metropolitan fashion. The famous library of Celsus at Ephesus in present-day Turkey is a good example, with its elaborate columnar façade confidently announcing its presence in the town and celebrating its donor’s wealth, intellectual virtues and career. 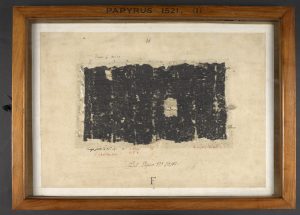 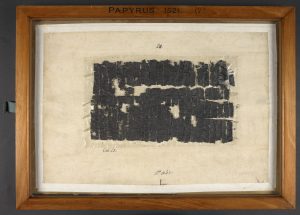 Despite the presence of public libraries, private book collections remained important. Greek and Roman authors regularly comment on the rich resources accumulated by their aristocratic literary patrons, and we are fortunate enough to be able to see one such private villa library in the carbonised remains from Herculaneum. These fragile scrolls (burned but preserved by the volcanic eruption of 79 CE that also buried neighbouring Pompeii) give us a precious insight into the sort of book collection a rich Roman in the Bay of Naples might have enjoyed.

The books unrolled and read so far, using a combination of increasingly sophisticated imaging techniques, are mostly works of Epicurean philosophy by – or connected to – the 1st-century BCE author Philodemus, but much may still await discovery and deciphering.