Relief panel with The Spoils of Jerusalem Being Brought into Rome, Arch of Titus, Rome, after 81 C.E., marble, 7’10” high 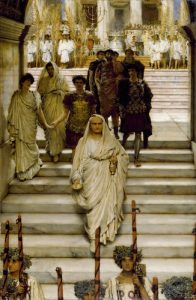 Sir Lawrence Alma-Tadema, The Triumph of Titus: AD 71, The Flavians, 1835 oil on panel, 44.3 x 29 cm (The Walters Art Museum); “The artist shows Titus returning to Rome in triumph following his capture of Jerusalem….His father, Emperor Vespasian…leads the procession. Titus comes next, holding the hand of his daughter, Julia, who turns to address her father’s younger brother and successor, Domitian…Alma-Tadema depicted these events by drawing on classical sources…and on the latest 19th-century scholarship regarding everyday life in Rome.” (Walters Art Museum)

The Roman triumph was an ancient martial tradition—a parade so riotous that its symbolic culmination involved catapulting the victorious general (triumphator) to quasi-divine status for a single, heady day. The Romans marked his status by staining his face red using the mineral pigment cinnabar (Jupiter’s countenance was said to have the same ruddy hue).

The Romans traced the traditions of the triumph back to their own beginnings. Rome’s legendary founder, Romulus, was the first to celebrate the rite when he defeated and killed Acron, the king of Caenina.

In the summer of 71 C.E. the Roman emperor Vespasian and Titus, his eldest son, had quelled a dangerous revolt in the Roman province of Judea and returned to Rome to celebrate this major accomplishment. Not only that, but the Flavian dynasty (Vespasian and his two sons Titus and Domitian) had succeeded in winning the throne during the year 69 C.E.—a time of bloody civil turmoil known as the “Year of the Four Emperors.” 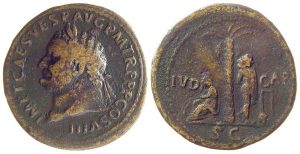 A great deal was at stake for Vespasian and Titus, both relative political newcomers from a family line (Flavius) that was not particularly illustrious. The honor of the triumph was accorded to them jointly, and the spectacle (as described by Flavius Josephus in his text known as The Jewish War) rivaled anything that Rome had ever seen before: spoils, prisoners, pictorial narratives in abundance. All this was meant to awe the spectators and to transport the viewers to the battlefields of the war in the east. But the ritual of the triumph, its parade—even the semi-divine status accorded the triumphator—was ephemeral. For this reason, the later construction of permanent monuments (like the Arch of Titus) served to make an impact on the urban landscape (and the collective memory of city dwellers) that lasted far longer than the events of the day itself. 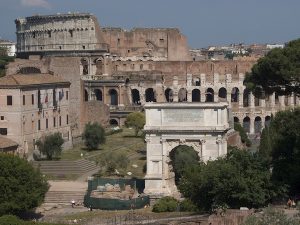 The tradition of triumphal monuments connects the Flavians to the traditions of the Roman Republic. Early monuments included columns—for instance the rostrate column (columna rostrata) of Caius Duilius (c. 260 B.C.E.)—and the early triumphal arch prototype known as the fornix Fabianus erected in the Forum Romanum by Q. Fabius Allobrogicus in 121 B.C.E. The emperor Augustus continued the use of the triumphal arch, even though he restructured the institution of the triumph itself. Since the Flavians were relative newcomers to the Roman power structure, they needed as much legitimization as they could find, and thus participating in the time-honored traditions of the triumph and its stock monuments made a good deal of sense.

Topography and the triumph 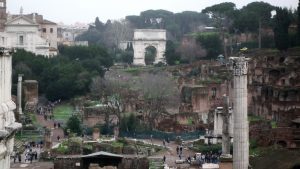 The Arch of Titus is located in Summa Sacra Via, the highest point of the Sacra Via, Rome’s “Sacred Way” that served as its main processional street. Furthemore, the Arch of Titus   commands a key point along the triumphal route (via Triumphalis)—one that visually links the valley of the Flavian amphitheater (known to us as the Colosseum) to the valley of the Forum Romanum and the Capitoline Hill beyond. Many triumphal parades had passed along this route for many centuries, thus the choice to place a permanent triumphal monument astride the route was not accidental but, rather, deliberately evocative of the fact that the triumph as a ritual both created and reinforced collective memory for Romans. This arch, built as an honorific monument, honored Titus posthumously and was a project executed by his younger brother and imperial successor, Domitian (emperor, 81-96 C.E.). Another arch dedicated to Titus, triumphal in its nature, was located in the valley of the Circus Maximus—but this arch only survives in the form of scattered sculptural fragments and a Medieval transcription of its dedicatory inscription. Recent archaeological excavations (2015) in the Circus Maximus have revealed previously unknown remains of this “lost” arch, including elements of its foundations. 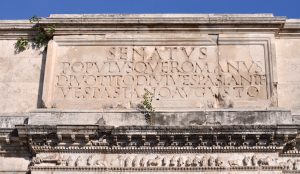 The surviving ancient attic inscription (above) records the dedication of the monument to Titus. Given that Titus is identified as having been deified (divus), we learn that the monument’s completion can only have occurred after Titus’ death in September of 81 C.E.

The text of the attic inscription reads:

The Senate and the Roman people (dedicate this) to the deified Titus Vespasian Augustus, son of the deified Vespasian

The inscription makes the dedication a public one—undertaken on the part of the Senate and the Roman People (Senatus Populusque Romanus), and reminds viewers of Titus’ link to his likewise deified father, Vespasian, who had died in 79 C.E. This dedication is an example of shrewd power politics on the part of the Emperor Domitian—he had been too young to take part in the military glory enjoyed by his father and brother. Perhaps he sought to bask in the generally favorable public opinion they enjoyed as he himself made the transition to power. 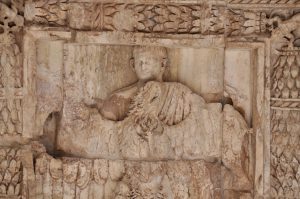 View of the vault of the arch’s passageway, with a relief of the apotheosis of Titus (photo: Dr. Steven Fine, used by permission)

Two panel reliefs flank the single passageway of the arch, and a third adorns the vault (the vault relief is above). The subject matter of the flanking reliefs draws upon the 71 C.E. triumph of Vespasian and Titus, depicting key triumphal episodes following the fall of Jerusalem. In one scene (below)  Romans carry spoils from the Temple in Jerusalem, including a Menorah, sacred trumpets and the showbread table. Recent studies have shown these items were painted with yellow ochre. 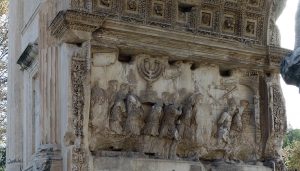 The triumph panel opposite depicts Titus in a triumphal four-horse chariot (quadriga) followed closely by the goddess of Victory (Victoria), preceded by official attendants known as lictors, and accompanied by symbolic representations (genii) of the Senate, the Roman people, and Virtus (manly virtue) (below). 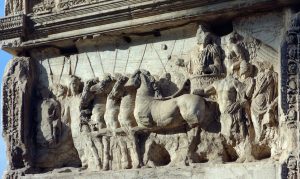 Since the triumphal parade would have passed through the very spot on which the arch was constructed, these images serve as powerful evocations of collective memories shared and held by the Roman people. The depiction in the reliefs echoes the riotous parade described by Flavius Josephus. The program of Flavian architecture largely transformed the physical landscape of Rome; this program was replete with visual cues and reminders of Flavian success, all of which stemmed from and centered around the great triumph at the culmination of the Jewish War. 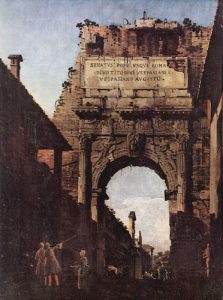 During the eleventh century the arch was incorporated into a fortress built by the Frangipani family in Rome, resulting in damage to the panel reliefs that is still visible today. In 1821, during the pontificate of Pope Pius VII, Giuseppe Valadier undertook a major restoration of the surviving structure. In order to identify those portions that had been restored, Valadier employed travertine as opposed to the original marble. The western side of the attic received a new inscription at the time of this restoration. Canaletto’s famous painting of the arch grants a view of the monument’s condition prior to Valadier’s restoration. 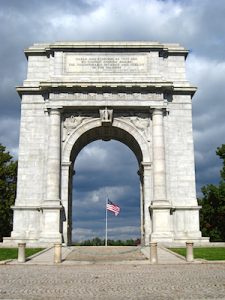 The Arch of Titus has long provided a source of artistic inspiration. Leon Battista Alberti was inspired by its form as he designed the facade of the basilica of Sant’Andrea in Mantua, Italy, after 1472. The Arch of Titus has inspired many modern commemorative arches, notably the Arc de Triomphe in Paris (1806), Stanford White’s Arch in Washington Square Park in New York City (1892), the United States National Memorial Arch in Valley Forge National Historical Park designed by Paul Philippe Cret (1917), and Edward Lutyens’ India Gate in New Delhi (1921).

Coloring in the the troubled history of a renowned Roman arch

H. S. Versnel, Triumphus: an inquiry into the origin, development and meaning of the Roman triumph  (Leiden: E. J. Brill, 1970).

L. Yarden, The spoils of Jerusalem on the Arch of Titus: a re-investigation (Stockholm : Svenska Institutet i Rom; Göteborg : Distributor, P. Åströms, 1991).