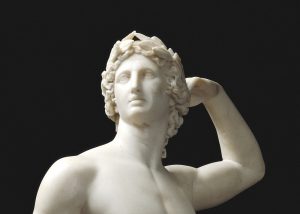 From symbol of victory to Snapchat filter, wreaths of leaves and flowers have had symbolic meaning in Western culture for over 2,000 years. 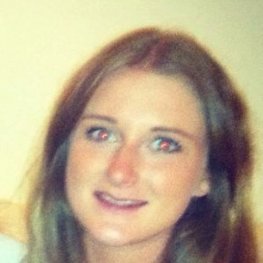 The flower crown is today a fashionable accessory synonymous with Coachella revelers and boho brides, but it’s not new: wearing leaves and flowers as a headpiece has a rich history dating back to the ancient classical world.

Since antiquity, the circular or horseshoe shape of the wreath has been a symbol of glory, power, and eternity. In ancient Greece and Rome many crowns were made of wool and foliage such as myrtle and ivy leaves, and were adorned with different flowers, which held various associations through time.

Ancient gods and goddesses were often represented in art and literature wearing specific plants dedicated to them. In Ovid’s Metamorphoses, the beautiful nymph Daphne manages to escape her pursuer, the god Apollo, by turning herself into a laurel tree. Apollo cuts off a branch from the tree and exclaims, “Although you cannot be my wife, you shall at least be my tree; I shall always wear you on my hair, on my quiver, O Laurel.” (557–559). He keeps his word, and as a result is often depicted wearing a laurel wreath as a symbol of his love for Daphne. Apollo is the god of poets and writers, and the term poet laureate that we use today comes from this myth.

White poplar leaves were associated with Hercules, who, according to tradition, imported the tree to Olympia from northwest Greece. 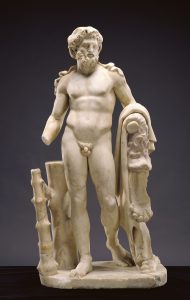 The ancient Greeks first introduced the crown as an honorary reward for victors in athletic, military, poetic, and musical contests. For example, the Pythian Games were held at Delphi every four years in honor of Apollo, and winners traditionally received a wreath of bay laurel. The bay laurel tree is native to the Mediterranean region, and it stood as an important symbol of victory, achievement, and status.

Olive wreaths were also awarded to winners of athletic competitions, like the nude young man shown below. Wild olive trees grew at Olympia where the Olympic games were held, and olive wreaths were given as prizes to victors at these games. He might have been a runner, wrestler, or weight lifter, who is crowning himself or removing the wreath to dedicate it to the gods as a sign of piety. 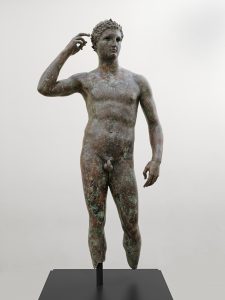 The symbolism of the laurel wreath survives to this day. It featured prominently on the medal design for the 2016 Rio Olympics, for example.

The ancient Romans continued the tradition of the crown as a reward for triumph. They dressed their leaders and military personnel in crowns made of laurel, oak, or myrtle. The grass crown or corona obsidionalis was the highest military honor, awarded by a besieged army to the general who liberated them. It was made of grass, weeds, and wildflowers gathered on the spot where the army had been attacked. 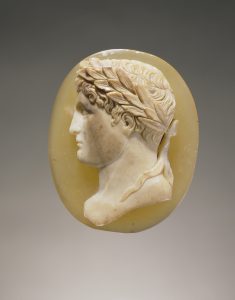 A profile of a man wearing a laurel wreath, which indicated that he was likely of high military rank. Cameo, 1700s–1800s, European. The J. Paul Getty Museum, 83.AL.257.15, Bequest of Eli Djeddah. Digital image courtesy of the Getty’s Open Content Program

Flower crowns were also worn for festivities and celebrations, much like they are today; they were customary at events such as sacrifices to Gods and feasts. In depictions of Greek men at symposia (aristocratic drinking parties) we often see figures wearing wreaths. They believed that tying a fillet tight around their heads could ease their drunkenness—though today’s festivals goers might disagree. These were originally made of wool but later decorated with flowers and petals from roses, violets, myrtle, and parsley. 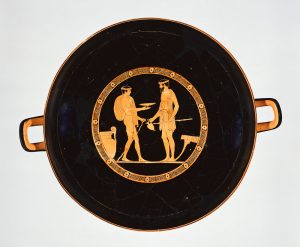 In Rome, the Floralia festival was held in honor of Flora, goddess of flowers, vegetation, and spring—so it’s no surprise that a headpiece made of flower petals and interwoven vines was the must-have accessory. In this representation of a statue of Flora, she is depicted holding her flower crown. 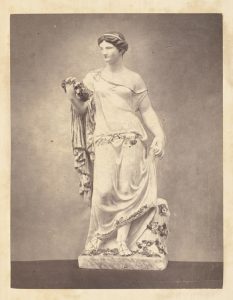 In Europe this religious festival was later celebrated as the secular May Day. In Alma-Tadema’s painting Spring, the artist represents this celebration and the tradition of sending children out to pick flowers on the first day of May. A procession of women and children wear colorful floral crowns and carry baskets of flowers. Alma-Tadema was obsessed with the ancient world, and he even set this Victorian celebration in an imaginary ancient Rome.

Although the flower crown was popular in the ancient world, as Christianity spread it fell out of favor due to its association with pagan festivals. But it made a comeback in Renaissance art, as artists and scholars looked again to the classical past for inspiration.

In modern times we often see flower crowns used as a reminder of the ancient Mediterranean world. As just one example, German photographer Baron Wilhelm von Gloeden used the flower crowns in portraits he created of in Sicily, as a symbol of his subjects’ ancient heritage. 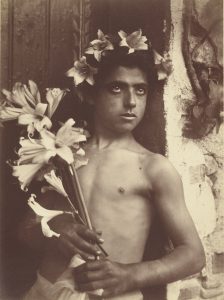 Even the bridal crown, it turns out, has ancient roots. The Roman bride would wear a crown made of verbena that she herself had picked. In modern times, Queen Victoria made the practice fashionable by wearing a crown of orange blossoms in her hair on her wedding day to prince Albert on February 10, 1840. It was also during the Victorian era that interest in “floriography” rose, with women often depicted wearing flowers to communicate a personal attribute. The orange blossom, for example, is a symbol of chastity. 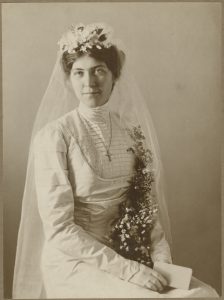 Today the trend of wearable fronds and flowers continues in a variety of ways—as a symbol of victory, celebration, love, romance, or femininity, whether you’re wearing a wreath to a festival or donning a digital version on Snapchat.