“The gates of civility have been blown apart” 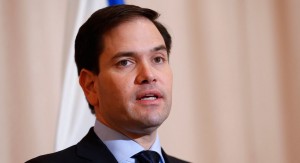 Marco Rubio is looking for a win in his home state of Florida on Tuesday. | AP Photo

Sen. Marco Rubio appeared on CNN’s “State of the Union” with Jake Tapper and called on his fellow Republicans to cast the rhetoric of Donald Trump aside or watch their party continue to divide and disintegrate.

Referencing the interrupted rally for Trump in Chicago, Rubio said, “This is not about being politically correct” and added “the gates of civility have been blown apart.”

The concern in his voice was unmistakable as he answered Tapper’s various questions with the following:

The most important election in a generation into a circus, a complete fiasco.

This country deserves better, and people have to wake up here.  At some point, this is really going to do damage to America.

There are people out there who are not completely in control of themselves and they hear something like this from a leader; you don’t know what they’re going to do next.

If we reach a point in this country where we can’t have a debate about politics without it getting to levels of violence or anger, where people think just because you’re angry you can say and do almost anything you want, we’re going to lose our republic.  We’re going to have a big problem. Those images from Chicago the other night, it looks like something out of the Third World.

I’m very concerned.  We don’t know what’s going to happen next here. I know that we have reached the point now where people in American politics have decided that if they don’t agree with you, that they can get angry at you, that you’re a bad and evil person.

Republicans supporting Trump would do well to heed his words.

Mr. Webster defines political correctness as “conforming to a belief that language and practices which could offend political sensibilities (as in matters of sex or race) should be eliminated.”

Being “politically correct” has historically meant avoiding terms like the “N” word when speaking of African-Americans or the “B” word speaking of women.  Many agree with it, and many don’t.  But Trump’s words are not simply shirking political correctness, as Rubio rightly states.  They are completely casting off any sense of civility expected not just of people in general but especially of our political leaders.

What Trump really means to say is, “Not only do I refuse to be politically correct, but I also have a problem with that whole politeness and courtesy thing.  Whatever, it’s all the same thing, that I can tell you.”

When we have lost the desire to be civil to one another in disagreement and to view those with opposing opinions as Satan personified – as Rubio says, “a bad and evil person” – then we have taken public discourse to a new low.

Trump, like it or not, is the face of the GOP at the moment.  He is their leading candidate for, and trends continuing, likely nominee of the Republican Party for the presidential bid this year.

Sen. Rubio’s fears are well-founded in history, and his fellow party members need to take serious stock of themselves and ask if they want this man representing them.

Rubio continues to say he will support the GOP nominee because he has to lead by example but adds, “It’s getting harder every day.”