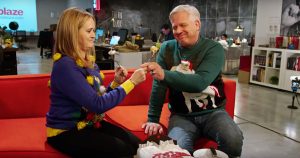 In case you missed it, Donald Trump was officially elected president by members of the Electoral College on Monday. With this news hanging over her, Samantha Bee decided that it would behoove her to get to know a very controversial colleague from across the aisle, and she did just that in the most perfect way possible.

In a Christmas edition of Full Frontal, Bee sat down with Glenn Beck, to discuss their differences and possible similarities, and the two (both decked out in “ugly” Christmas sweaters) found out that they weren’t as far off the mark from one another as they thought.

When explaining to Beck why she decided to reach out and have him on her show, she said:

“I think that our future is going to require a broad coalition of non-partisan decency. It’s not just individual people against Donald Trump, it’s all of us against Trumpism.”

“I agree. As a guy who has done damage, I don’t want to do anymore damage. I know what I did. I helped divide—I’m willing to take that.”

Wait until you see what else unfolds. You won’t believe what happens at the end!

Watch the full interview below: