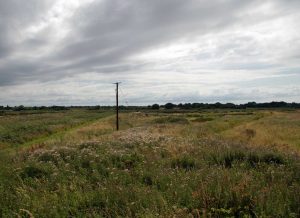 The rain was mercifully holding off and the mid morning breeze had all but blown itself away as I crouched at the edge of a sand lined pool in the rough corner of a reed-thick, marshy field and slowly lifted the tarnished metal object like some venerated long lost relic, dripping from the shallow water. A swallow dipped silently, swiftly low to my right and was gone. 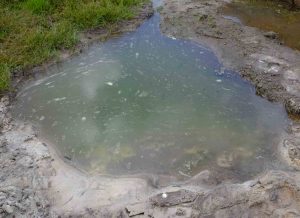 As a complete and utter novice when it comes to archaeology, I’d been thrilled to be offered an opportunity recently to be a volunteer for a day on the mesolithic site at Lunt Meadows, Sefton, near Liverpool. Fortunately, my enquiry to participate in the dig had neatly coincided with the run up to the Day of Archaeology. It was Friday 29th July 2016 and I was actually, finally, having a close encounter with prehistory. 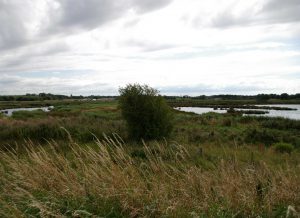 The site was identified beneath low-lying farm land close to the river Alt in 2012, by the Curator of Archaeology at the Museum of Liverpool, Ron Cowell. During his team’s four-year long dig some intriguing finds have been unearthed, perhaps most notably and mysteriously a shiny yellow stone consisting of iron pyrite or ‘fool’s gold’. 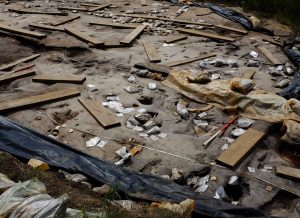 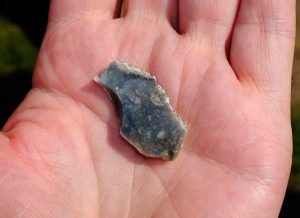 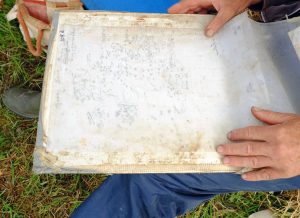 [LEFT]: An overview of the Mesolithic site at Lunt Meadows.
[CENTER]: A recent volunteer’s find, bearing a roughly worked cutting edge.
[RIGHT]: One of the many precise site drawings made during the four year excavation.

What the meticulous excavation process at Lunt Meadows is gradually revealing includes datable evidence within and around the surface of a number of curved walls, shallow pits, tree roots and what appear to be traces of several post holes. 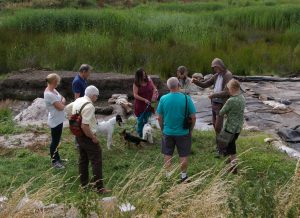 These findings appear to suggest that nomadic hunter-gatherers of 8,000 years ago could have created simple structures there, in the form of semi-permanent dwellings. It is thought that generations of family groups may have inhabited the North West England site seasonally and that individual occupations were intermittent. 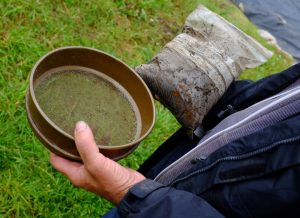 The finely meshed sieve and a bag of Shirdley Hill sand.

By late morning I’d been shown how to correctly sieve a bag of Shirdley Hill sand. Once all the finer particles had passed through the sieve’s one millimetre mesh, I was able to confidently identify, separate and quantify what remained from each sample. The three and four litre bags of grimy-looking sand, troweled systematically from various levels and locations on the site, might contain material of real significance. The analysis of the sand’s contents could indicate what might have taken place there around 6,000 BC. 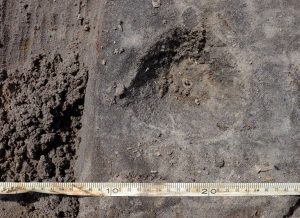 A depression from which a find has been extracted following its grid referencing.

What I could see as I scrutinised the ancient evidence trapped in the seive, were the tell-tale small chunks of charcoal, along with a few unmistakable fragments of blackened hazelnut shells, both of which were evidence of burning. These were intermixed with small clumps and threads of the brown fibrous material I’d been told to expect. 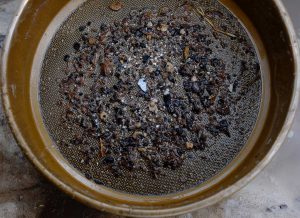 What remained from the Mesolithic after my first experience of sieving.

However, what delighted me was the presence of the elegant, tangible thing that had first caught my eye. I’d pretended to ignore it as I clumsily separated the ancient spoils. But there it was, a small flint flake, stark and glistening in the sieve, like a tiny shark’s fin. Even though this lithic was only a byproduct of probable tool making, it was nevertheless an indicative link to human prehistory and represented a rare encounter for me. 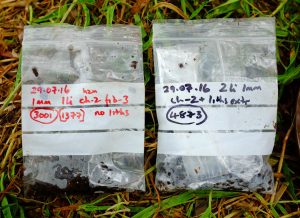 Bagged samples of charcoal and fibrous material extracted from the sieved sand.

Having done the best I could to divide and estimate the proportions of fibrous and burnt material from my sieving, I consigned them together into small bags on which I’d written the original sand sample numbers and the rest of the relevant data. The extracted ‘lithics’, in the form of my flint shark’s fin and another smaller dark flake, went into a separate bag which then re-joined the sample material. 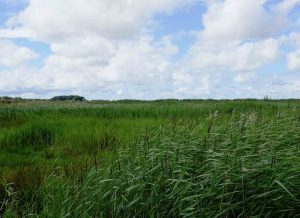 A view across the Nature Reserve from the Lunt Meadows mesolithic site.

I spent what remaind of my Day of Archaeology sieving, bagging and recording the data relating to the sand samples. Towards the early evening, as I gazed across the Nature Reserve to the skyline, I began wondering whether there may be other opportunities for a novice like me to continue learning, while helping in some small way to unlock the secrets of prehistory.

And the moorhens called to each other and a reed bunting sang.