The first two, and most notable, countries in the Americas to gain independence were the United States (1776), led by General George Washington, and Haiti (1804), led by Toussaint L’Ouverture. Other Latin American countries soon followed, with exceptions such as Cuba and Puerto Rico, embarking on their struggles for independence in the early nineteenth century. However, since territories were freed in sections with the ultimate goal of liberating an entire viceroyalty, the fight for independence came slowly and in stages.

The Mexican struggle for independence began with the Grito de Dolores (Cry of Dolores). In September of 1810, Miguel Hidalgo, the parish priest of the small town of Dolores in central Mexico, uttered the country’s cry for independence. He called not only for liberation from Spain, but also for the end of slavery and the return of lands to the indigenous inhabitants. A highly educated creole, Hidalgo had read the works of Enlightenment writers and had been an important community organizer in Dolores. While Hidalgo’s efforts led to both the stripping of his priestly title and his gruesome execution, his cry set in motion the Mexican fight for independence. 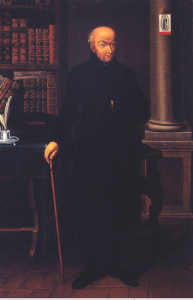 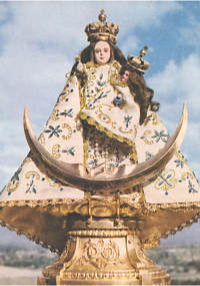 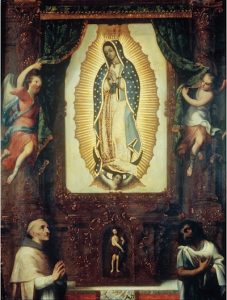 After Hidalgo’s failed attempts at instigating a revolution, José María Morelos, another revolutionary priest, and the army general Agustín Iturbide continued the struggle (IIturbide had originally fought for the Spanish royalists, but he switched sides following his dismissal from the armed forces due to accusations of unwarranted violence and misuse of funds). The Plan of Iguala, a proclamation which Iturbide authored together with the rebel leader Vicente Guerrero in 1821, proclaimed Mexico’s independence from Spain while reaffirming the country’s alliance with the Roman Catholic Church and establishing equal rights for both criollos and peninsulares. On August 24, 1821, with the signing of the Treaty of Córdoba, Spain finally recognized the independence of the First Mexican Empire, led by none other than Iturbide himself. 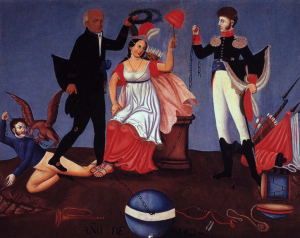 In Mexico, historical narratives were often symbolically depicted, as in Allegory of Independence (above) by an unknown painter. The seated figure, an allegorical (symbolic) representation of Independence, is adorned with Mexican accessories such as an Aztec feathered headdress; however, she also holds a Phrygian cap, a symbol of freedom usually associated with the French Revolution. She is flanked by the figures of Hidalgo (on the left) and Iturbide (on the right)—portrayed here as the fathers of Mexican independence. Hidalgo crowns Independence’s head with laurels (a classical sign of victory), while Iturbide breaks the chains of enslavement. In terms of her ethnicity, Independence appears closer to the depiction of Iturbide than to Hidalgo, whose skin tone reflects Amerindian ancestry, even though he was a Creole (criollo). Hidalgo and Independence step on a figure who represents despotism, and who is being shooed away by the eagle, a symbolic reference to the Aztecs. Together, these symbols of Mexican independence articulate both a sense of pride in Aztec ancestry and an appreciation for European ideas of liberty. With their depictions of potently symbolic figures and themes, such paintings energized the struggles for Latin American independence and aided in the creation of national unity.