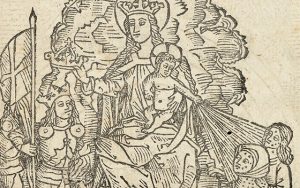 My very dear friends turned their backs on me as if some pursuing enemy had his sword at their throats, without giving a single thought to the obligations of human fellowship and friendship.

Thus wrote Joseph Grünpeck, a canon and private secretary to the Emperor Maximilian I, in his Libellus (1503), in which he recalled his recent experience of suffering from the ‘French disease’. The Libellus is one of the earliest patient narratives in European medical history, and Grünpeck spares no detail in recounting the pain, ‘despair’, and horrifying symptoms (including pustules and ulcerations) that he experienced. Ironically, just a few years earlier, a then-healthy Grünpeck had published his Tractatus (1496), in which he explained the astrological conditions and conjunctions of the planets that he believed had given rise to the French disease. 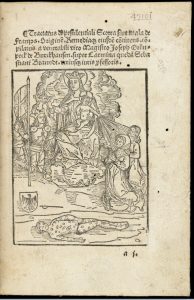 The ‘French disease’ erupted in Europe in 1495, reaching Scotland in 1497 and Russia in 1499. Widely believed to have begun its spread with the siege of Naples by the army of Charles VIII of France, it became popularly known as the French disease. Today this disease is identified as syphilis, although it is now thought that the early modern ‘French disease’ also encompassed other illnesses, including gonorrhoea, which only became distinguishable during the late nineteenth century.

Historians have often emphasised the relationship between the French disease, ‘stigma’, and ‘moral condemnation, ridicule, and social scorn’, and such negative reactions to the disease and its victims certainly occurred in early modern Europe. However, we cannot presume that such responses were innate or universal. Emotional responses are influenced by context, and through factors such as religion, politics, and medical beliefs. Whilst Grünpeck’s ‘friends’ reacted negatively, we cannot assume that this was the only possible response.

Historians such as Owsei Temkin have argued that the names given to the disease during the early modern period indicate a xenophobic desire to blame rival nations; these names included the French disease, the Neapolitan disease and the Spanish disease. Moreover, the Black Death of 1347-51 witnessed attacks on Jews and other minorities. However, despite using the name ‘French disease’, Grünpeck does not stigmatise the French. He argued that astrological conditions, rather than any specific national misdeeds, had led to the disease originating in France, thus placing it beyond human control.

In 1519, Grünpeck’s compatriot Ulrich von Hutten, a knight and humanist, published his De guaiaci medicina et morbo gallico (The Guaiacum Medicine and the French Disease). Von Hutten also used the term ‘French disease’ but only, he insisted, to ensure his audience would recognise his subject matter, and not because of any animosity that he felt toward the ‘noble’ French. Thus, whilst the names given to the disease seemingly suggest xenophobic attitudes, even in the earliest years of the pandemic, such sentiments were evidently not universal. Furthermore, no persecution of foreign communities or other minorities caused by the outbreak of the French disease has been identified.

Indeed, Von Hutten reserved his harshest criticism for his own countrymen, declaring that their ‘riotous’ lifestyle, consorting with whores and gluttonous dining, had caused the disease’s spread through Germany. His religious views deeply influenced his reproach; he was a supporter of the Protestant reformer Martin Luther, who had condemned the greed and immoral behaviour of Roman Catholics. These arguments also reflect the Galenic medical thinking of this period, which emphasised the importance of moderation in diet and the ‘passions’ (including sexual activity).

Grünpeck, who wrote in a Catholic pre-Reformation context, stated in his Tractatus that God sent the French disease to punish humanity’s sinfulness. Unlike von Hutten, he did not focus on his Germanic countrymen but instead saw the disease as a consequence of Europe-wide immorality. This contrast arguably illustrates how von Hutten’s perception of the Germanic victims of the disease was influenced by the tensions present in his specific Reformation context, as Lutherans attempted to rectify what they perceived as the sinfulness of Catholics.

Like Grünpeck’s Libellus, von Hutten’s Guaiaci medicina provided a patient narrative, describing his suffering, such as the ‘grievous sores’ on his legs. However, the most striking feature of this text is the sense of hope that it conveys. Von Hutten describes his treatment, which involved drinking decoctions of guaiacum wood (which had arrived from the New World between 1508-1517) and maintaining a moderate regimen. Von Hutten believed that Amerindians had been using guaiacum to cure the French disease long before the European pandemic. Thus, he believed it was the disease’s ‘magic bullet’ and that it had cured him, professing that: ‘I have great hope that I should live whole, sound, and lusty’. He died of the French disease four years later. 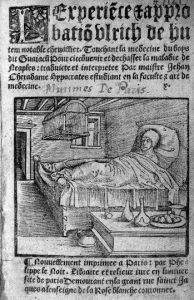 Like Grünpeck, von Hutten discussed friendship, but their experiences contrast sharply. Whilst Grünpeck‘s companions shunned him, not even the horrific physical manifestations of the French disease caused all friends to abandon von Hutten. He was particularly moved by the concern of one ‘very sure’ friend who, on seeing his extreme suffering, counselled him to kill himself. Whilst such advice can seem shocking, von Hutten was adamant that his friend’s advice reflected his love, remarking that the man temporarily lost sight of his Christian faith (which forbids suicide) in his desire to see him relieved. Clearly, social rejection and hatred were not the only responses inspired by the French disease.

That both authors published their texts during their lifetimes strongly suggests that they felt that admitting to suffering from the French disease did not threaten their reputations. Although von Hutten linked the disease with sexual intercourse, he denied that this was the only mode of transmission. In a letter to Wilibald Pirckheimer, a humanist lawyer from Nuremberg, he attributed his own infection to his life of travel and scholarship, with its ‘frost and heat, hunger, thirst, and exhaustion’, rather than to any ‘intemperance’ in his way of life. Other authors also posited non-venereal theories of contagion; William Clowes, an English surgeon, believed that the disease was principally a venereal one, but could also be contracted by eating with infected persons or wearing their clothes.

It is therefore possible that von Hutten believed he had contracted the disease through a non-venereal route. However, it is also possible that he was using medical explanations to preserve his reputation. By claiming his case was non-venereal, the unmarried von Hutten probably hoped to avoid association with the extra-marital sex condemned by his fellow Lutherans, who believed that ‘fornicators shall not enter the Kingdom of Heaven’. Whether he believed the theories of non-venereal infection or not, von Hutten evidently felt they were sufficient to protect his reputation. Indeed, he may even have hoped to gain some social advancement or recognition for his work, since he dedicated the book to Albrecht, Elector and Archbishop of Mainz.

Grünpeck admitted he had contracted the French disease at a banquet attended by ‘Venus as well as by Bacchus and Ceres’, although he does not make a more explicit connection between the disease and sexual intercourse. This may indicate his desire to distance himself from any association with sinful sexual behaviour, which was condemned by the Roman Catholic Church and by Emperor Maximilian’s ‘Blasphemy Edict’ (1495), which sought to fine anyone found indulging in sinful behaviour, succumbing to lust or drunkenness.

Like von Hutten, Grünpeck believed he had found a cure for the disease, involving bloodletting, temperate regimen and herbal remedies. At the conclusion of the Libellus he also recommended that those afflicted with the disease should pray for God’s help, thus suggesting that only those who repented their sins could hope to be cured. The implication of this theory is particularly significant for Grünpeck himself; because he was (believed to be) cured, this proved the health of both his body and his soul. Grünpeck may have relied upon this theory to preserve his reputation, which apparently survived intact. He continued in imperial service until the death of Maximilian in 1519, and was still producing literary works at the age of 81.

The writings of Grünpeck and von Hutten do not tell a straightforward narrative of hatred, and xenophobic sentiment is notably absent in their accounts of the French disease. The influence of context, particularly religion, on responses to the disease is evident in the texts of both authors. Both sought to avoid association with sexual sins, and von Hutten’s Lutheran convictions strongly influenced his condemnation of his compatriots’ lifestyle. Yet ultimately neither text is concerned with emphasising blame. Both men experienced hope because, they believed, they had found effective cures and, whilst possibly inspired by social or economic desires, both the Libellus and Guaiaci medicina seek to inspire hope and faith in the cures in their readers. Clearly, the French disease was far more than a simple pandemic of hatred, and in von Hutten and Grünpeck we begin to glimpse something of its complex emotional life.