As a certified Star Wars fan (thanks to my amazing father) *and* a curator of medieval manuscripts, I couldn’t resist putting together a guide of the out-of-this-world imagery and ideas about the universe from the Middle Ages.

In medieval Europe there was a close link between the celestial and the spiritual, and many images of the cosmos in our collection depict heavenly or religious scenes. To see how the people in the Middle Ages related to the stars and skies, I’ll offer examples in seven episodes (no Gungans, promise).

Episode I: The Prime Mover and Creation 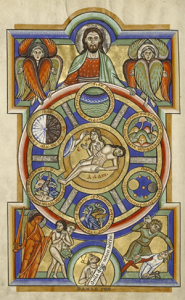 Medieval Christians believed that the formless void of the universe was the workmanship of God, often known as the Divine Architect or the Prime Mover.

The creator was often depicted in medieval art inscribing the circumference of the world with a compass or holding the round Earth in his hands (yes, they knew the world was round!).

In order to better understand the sun, moon, and stars described in the Bible—together with angels and other astral phenomena—Christian and humanist writers and thinkers often turned to earlier philosophical and scientific traditions, as well as to other world religions.

Episode II: The Meaning of the Stars 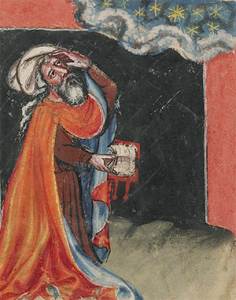 Humankind has always looked to the sky in wonder, with a desire to understand the universe and ourselves.

To grasp the mysteries of the cosmos, medieval scholars drew heavily upon diverse written, visual, and oral traditions, including Greco-Roman, Islamic, Jewish, and Zoroastrian. In particular, they looked to Plato, Aristotle, Ptolemy, and the texts of many ancient and classical writers that flourished in pockets of Afro-Eurasia, from Ireland to the Middle East. For example, a 12th-century Miscellany at the Getty contains numerous depictions of constellations, and the writer included captions indicating the names of these star-clusters in both Latin and Arabic.

In this illumination from Rudolf von Ems’ World Chronicle we see the wise Jonicus (the supposed fourth son of Noah), who was dubbed the first astronomer for his systematic approach to studying celestial phenomena. 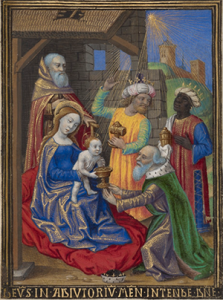 The New Testament recounts that after Jesus’s birth the Holy Family was visited by gift-bearing Easterners called magi who followed a great star that appeared over Bethlehem. Medieval writers interpreted these star-men as earthly kings based on the number and value of objects they brought to the infant Jesus: gold, frankincense, and myrrh, each a precious material associated with a distant land.

The illuminator of this miniature followed a tradition of symbolically depicting each magus as hailing from one of the then-known continents. The eldest (in green) is attired with costly cloth-of-gold silks, then fashionable at European courts. The middle and youngest kings (in yellow and red) have darker skin and wear turbans, associated with men in Sikh or Muslim communities, which in this context would have signified Asia and Africa. 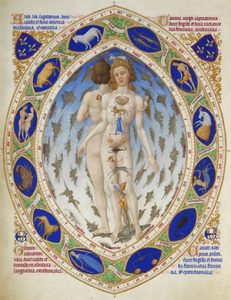 Stars and planets were (and still are!) also believed to have great influence over our bodies. The popular medieval image of the “Zodiacal Man” presented human bodies as microcosms of the greater universe, with signs of the zodiac associated with parts of the body: Aries with the head, Gemini with the shoulders, Scorpio with the genitals, and Pisces with the feet.

Prayer books and liturgical manuscripts often included visualizations of the zodiac on calendars for the appropriate month, thereby drawing more direct links between these astral lights and seasonal activities. 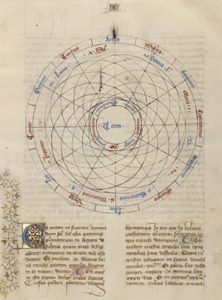 Earth sat at the center of the medieval view of the universe. This diagram shows the celestial bodies in their “correct” order: moving outward from Earth at center we find the orbits of the Moon; Mercury and Venus; the Sun; Mars, Jupiter, and Saturn; the fixed stars; and the Prime Mover (God).

Celestial bodies were sometimes imagined in human guises: an emperor as the Sun, a young maiden as the Moon, and a doctor as Mercury. They were also associated with certain human traits, an idea that persists in our language today. A lunatic has crazy behavior influenced by the moon, luna. A mercurial person is shifty, changeable, and unpredictable, like the Greek god Mercury. Likewise, a saturnine individual exhibits a melancholy or morose temperament, like the Roman deity Saturn.

The planets also gave their names to the days of the week, some of which are still decipherable in English, like Saturday (Saturn-day), Sunday, and Monday (moon-day). Planetary influence is easier to discern in languages directly descended from Latin, such as Italian, Spanish, and French. Their words for Tuesday—martedì, martes, and mardi—all mean Mars-day.

Episode V: Transcenders of the Veil 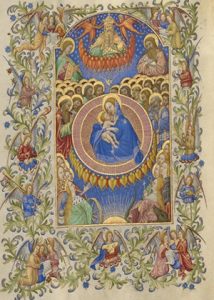 Angels often transcended the galactic veil of heaven to bring messages to earth, as when Gabriel told Mary that she was with child. The belief in guardian angels, one for each individual (or group, depending on the early church theologians) also prevailed: personal protectors from bodily, temporal, terrestrial, and spiritual harm.

In this image from a private prayer book, angels fill the borders of the page, singing and playing musical instruments. Even more angels join in the chorus of saints that surround the Virgin Mary and Christ, above the light of earth’s atmosphere and beneath the radiance of God the Father and the Holy Spirit.

Episode VI: A War in the Heavens 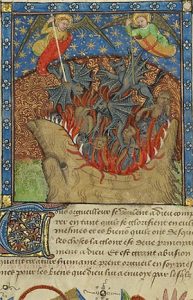 Lucifer is the name often given to Satan or the Devil, a being that was once filled with light (from the Latin for light-bearer, lux and –fer).

The last book of the Bible (Revelation 12:7–9) describes how Lucifer and his angels were expelled from Heaven, thereby becoming enemies of God and demons who torment human lives and souls:

“And there was a war in the heavens: [Archangel] Michael and his angels fought with the dragon, and the dragon fought with his angels; and they prevailed not… And that great dragon was cast out, that old serpent, who is called the devil and Satan, who seduces the entire world; and he was cast into the earth, and his angels were thrown down with him.”

Saint Michael, an archangel, was often depicted in medieval art as vanquishing Lucifer and his cohorts, as seen in this image. The rebel angels are cast from the highest heaven into the deepest hell and swallowed by a hellmouth. 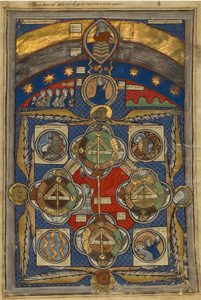 The Wheel of Ezekiel: The Preeminence of the Lion, Avignon, France, about 1320–21. Collection of Robert McCarthy

In the Middle Ages as now, spiritual visions often involved otherworldly sights or inexplicable out-of-body experiences in which one witnesses something transcendent, divine, or surreal. This exquisite and complex illumination represents the prophet Ezekiel’s vision of a cosmic tetramorph. This creature was described as having four faces (man/angel, lion, ox, and eagle) that spun and overlapped like wheels blown by the winds of the four corners of the world.

Ezekiel appears twice here: at center, surrounded by the flames of visionary sight, and above the tetramorph, kneeling in veneration of God atop the celestial spheres. God is clothed in the prism of a rainbow; the fixed stars, sun, and moon are set within another orbit, thereby condensing the order of the universe. Within the four spinning spheres, blue represents water, red fire, brown (with red flowers) earth, and gold air (atmosphere and light). All things appear connected, as if by a divine plan or…the force.

Even centuries later, images made to accompany medieval texts provide ample inspiration for awe, wonder, and imagination, rivaling anything Hollywood has to offer.

For even more images from the Middle Ages that represent the celestial bodies and related themes, check out this user gallery on Google Culture Institute. And for some purely imaginative Star Wars-themed medieval images, be sure to visit the Getty tumblr all this coming week.

May the force be with you!