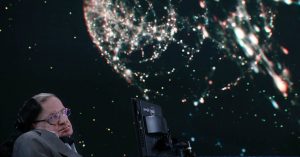 “Not since Albert Einstein has a scientist so captured the public imagination and endeared himself to tens of millions of people around the world.”

Visionary physicist Stephen Hawking, a leading explorer of the cosmos and champion of progressive causes, died early on Wednesday, March 14, at the age of 76.

Hawking was known for his research into properties of black holes, gravity, and Einstein’s theory of relativity, which he wrote about in his best-selling 1988 book A Brief History of Time, a work that was credited with sparking the general public’s interest in cosmology.

“Not since Albert Einstein has a scientist so captured the public imagination and endeared himself to tens of millions of people around the world,” Michio Kaku, a professor of theoretical physics at the City University of New York, told the New York Times.

His passing has left an intellectual vacuum in his wake. But it’s not empty. Think of it as a kind of vacuum energy permeating the fabric of spacetime that defies measure. Stephen Hawking, RIP 1942-2018. pic.twitter.com/nAanMySqkt

The scientist was diagnosed with amyotrophic lateral sclerosis (ALS) at the age of 21, and was told by doctors that he would die within three years. Instead, he embarked on an influential career, eventually using a wheelchair when he lost his mobility and a speech synthesizer to communicate.

Along with his discovery of phenomena such as Hawking radiation, the theory of energy flowing into and out of a black hole until it fades to nothing, Hawking was a fierce opponent of the war conservatives waged on science in recent years.

He condemned the so-called “debate” over climate crisis and was sharply critical of President Donald Trump’s decision in 2017 to withdraw the U.S. from the Paris accord on climate change.

“We are close to the tipping point where global warming becomes irreversible,” he said last summer. “Trump’s action could push the Earth over the brink, to become like Venus, with a temperature of two hundred and fifty degrees, and raining sulphuric acid.”

Hawking also warned against a potential takeover of artificial intelligence, as technologists in the U.S. suggested the country participate in an “A.I. arms race” as China expanded its capacity for automation.

The physicist also supported a boycott of Israel by academic, citing the nation’s treatment of Palestinians, and was a vehement critic of capitalism’s excesses, warning that economic inequality would skyrocket as more jobs become automated and wealth continues to be transferred to the already-wealthy.

“If machines produce everything we need, the outcome will depend on how things are distributed,” he said in 2015 in a Reddit “Ask Me Anything” session. “Everyone can enjoy a life of luxurious leisure if the machine-produced wealth is shared, or most people can end up miserably poor if the machine-owners successfully lobby against wealth redistribution. So far, the trend seems to be toward the second option, with technology driving ever-increasing inequality.”

On social media on Wednesday, influential members of the science community and others shared tributes to Hawking.

Remembering Stephen Hawking, a renowned physicist and ambassador of science. His theories unlocked a universe of possibilities that we & the world are exploring. May you keep flying like superman in microgravity, as you said to astronauts on @Space_Station in 2014 pic.twitter.com/FeR4fd2zZ5

“Anyone, anywhere in the world should have free, unhindered access to not just my research, but to the research of every great and enquiring mind across the spectrum of human understanding.” – Stephen Hawking #RIP

On the subject of life and death, Hawking himself shared numerous memorable thoughts in his 76 years.

“I believe the simplest explanation is, there is no God,” he said. “No one created the universe and no one directs our fate. This leads me to a profound realisation that there probably is no heaven and no afterlife either. We have this one life to appreciate the grand design of the universe and for that, I am extremely grateful.”