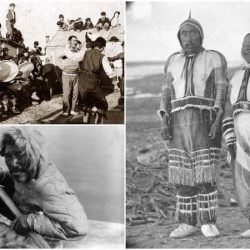 Geographical consultations with shamans showed the relationship between imperialism, exploration, and indigenous environmental knowledge.  By and large, British Arctic explorers lacked local knowledge of the environments through which they passed and, consequently, sometimes consulted Inuit shamans, whose geographical knowledge was known to be extensive. That these consultations could be made either in the formal atmosphere[…]