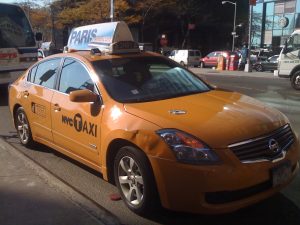 It’s simple enough. You step off the curb, raise your arm, and wait. Soon enough you’ll catch the attention of those familiar yellow “mech-animals” that dominate the streets of New York City. Hailing a cab in New York City is as much part of the natural ebb and flow of daily life as morning coffee from the guy in the truck/cart outside of your building.

Life evolves with us. And what better example of this is there than the ubiquitous NYC cab? First appearing in the early 19th-century, they have come in all shapes and sizes, representing different decades and feelings, transforming somewhat reluctantly with the introduction of new technologies. Commanded by fearless drivers who don’t flinch as they careen between buses and delivery trucks, cabs are fully integrated with life in Manhattan. They’re everywhere—unless it’s raining or you have somewhere to be—but this wasn’t always the case. 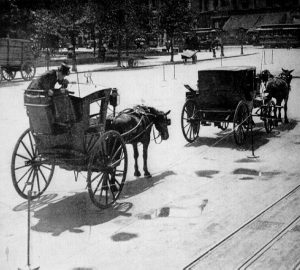 Before the automobile appeared on city streets at the end of the 19th-century, two-wheeled hansom cabs and four-seat hacks patrolled the streets transporting fares to their destinations in style.  And they did indeed have a certain style to them. According to American author Vance Thompson, in those days to be a cabber imparted a certain status: “You [rode] in a cab in order to be seen riding in a cab.” They were more than a convenience in their early days. Of course, as the city grew, the need for transportation grew with it, removing some of the elitism associated with cabbing. If you think the streets are chaotic now, Manhattan in the midst of the Civil War-era would have been impossible to navigate—horse-drawn and steam-powered omnibuses and railroads, carts, express wagons, and carriages all jockeyed for space. It was a dangerous place for pedestrians. Horses were unpredictable. They often ran away and were known to kick pedestrians. Although, in fairness to the horses, city life wasn’t easy on them: they had an average career of about four years, and it wasn’t uncommon for them to die in the streets (in which case, other horses would come and drag them away), which would only add to the congestion. It also smelled, as you can imagine. 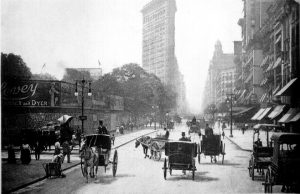 Congestion on mass transit meant that women were already experiencing sexual harassment in the form of wandering fingers and the subway characters I mapped out a few weeks ago were probably emerging in their earlier forms. While cabs still provided a means of travel, the city’s rapid growth was outstripping its transportation resources, and people demanded a fix. [Image Top Left: Two-wheeled hansom and four-seat hack. Source: Outing magazine, Vol. XLIX No. 2, Nov. 1906 p. 130. | Image Bottom Right: Cabs on Fifth Avenue. Source: Outing magazine, Vol. XLIX No. 2, Nov. 1906 p. 132.]
A solution was proposed with electric vehicles. Although their large batteries were a bit unwieldy, they offered a cleaner alternative to horses—but they were still a minority in the early 1900s. In Taxi! A Social History of the New York City, Graham Russell Gao Hodges, a former driver, tells the readers that the modern cab industry arose as a result of a fare dispute. Harry N. Allen felt he was overcharged (which apparently wasn’t uncommon), and vowed to start his own cab company. And he did: the New York Taxicab Company imported 600 gas-powered cabs from France in 1907. They were red and green and the drivers wore uniforms. As an introduction, Allen paraded them down Fifth Avenue and lined them up in front of the Plaza Hotel, ousting the hacks and hansom cabs parked there. He took measures to address two primary criticisms of the horse-drawn cabs: Allen’s cabs had taximeters (for which they are named), allowing a set price to be charged for a specific distance, and Allen ordered drivers to be polite to fares. Gas-powered vehicles offered many advantages over horse and electric cabs, such as less maintenance and greater reliability—that is not to say that they didn’t break down and emit plumes of smoke on occasion, but they didn’t need to be fed, curbed, or recharged. Despite some initial labor problems, the New York Taxicab Company was here to stay. By the teens, there were dozens of additional taxi companies and the horse-powered cabs were quickly becoming antiquated. 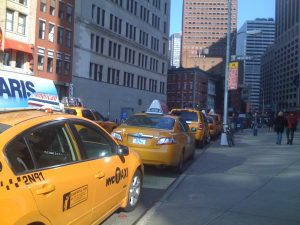 The familiar checkered cab appeared on the streets in the 1920s. They were painted yellow so that they would be easily spotted, but they weren’t the only cabs on the street. In New York City, a fare war soon erupted as rival taxi companies, which included (then) auto-giant General Motors, vied for control of the market prompting the introduction of medallions in the 1930s as a means for the city to control the quality and costs associated with a cab ride. In the 1960s, the city cemented the yellow taxis as icons by ordering all medallion taxis to be painted yellow so that these city-sanctioned rides would be easily identifiable. Livery cabs could operate as any color other than yellow.
In recent years, steps have been taken to control the effects of the explosive number of cabs in the city. It echoes strangely of the efforts to replace the horse-drawn cabs.
For example, electric vehicles have been re-introduced. According to some sources, electric vehicles were discontinued because they were too expensive to maintain, however NYC TLC spokesperson Allan Fromberg indicates that the technology simply wasn’t in place to launch the initiative (see comments below). Although some concessions have been made to the digital-era we live in: for example, a Passenger Information Monitor (PIM), which includes a credit card register so that fares can be paid for with plastic, was made mandatory for all cabs. After initial protests it seems that cabbies have accepted the devices (partly because it didn’t affect tips as originally feared.) Current cabs also seem to reflect our widening social circles as they include vehicles that can accommodate more passengers—and in fact, more “stuff.”  [Image Right: Updated per information from Allan Fromberg (see comments): SUV-type vehicles have been introduced as taxi cabs. Nov. 09.]
The drivers through the ages remain constant as a group: they are minorities, who first drove cabs because it was one of the only open avenues for making money, and some of whom now drive cabs for what they hope will only be a temporary period. According to Hodges:

At first, most of these drivers were African Americans, who were licensed to drive by the city in the early nineteenth century. By the 1840s, as was the case with many semi-skilled and unskilled occupations, Irish immigrants pushed African Americans out of the trade. This early example of ethnic succession was more violent than later transitions, but it established a tradition of entering immigrant groups viewing hacking as a viable income and significant step up the ladder of economic mobility.

With each wave of immigration, new groups would establish themselves as drivers. In the 1920 and 1930s, there was a rise of Irish, Italian, and Jewish drivers. According to Edward Adler, onetime driver and author of Notes From a Dark Street, these drivers took these jobs so their children would not have to, and once their children had graduated from universities, they left the trade. This group began to phase out in the 1950s and were gone by the 1970s. In the 1950s, African and Latin Americans, and Middle Eastern immigrants began to fill the jobs vacated by the Irish, Italians, and Jews before them. Today drivers are likely to hail from any number of countries, including India, Pakistan, Russia, Haiti, and Africa. They are doctors, lawyers, scientists, and professors in their own countries, but find that they lack the qualifications needed to pursue their crafts here in the United States. They turn to driving cabs—so their children won’t have to.
While riding in a cab may no longer carry a social status with it (though I wonder if a prolonged recession may change this), driving a cab seems to retain some of it’s working class branding. Allen’s issuance of uniforms created this image in the minds of cabbers, and while today’s drivers don’t wear uniforms, their role in ferrying people home after work, to and from parties, and other social gatherings. helps them retain this label even as they surely resent it. As an interview with at least one cabbie indicates, the labeling of drivers as members of a servant class, as well as their standing as immigrants, mean that they will never fully have a place in the mainstream. This is in spite of the fact that many cabbies have taken steps to purchase their own medallions so that they are driver-owners, and can keep the bulk of their earnings. Medallions come at a considerable cost (up to $600,000 for an independent owner medallion from $10.00 in the 1930s), but the cost has done little to mitigate the perception of the drivers—partly because so few of them actually own the medallions themselves, and there is no way to distinguish between a driver and and driver-owner, and it’s doubtful that many passengers even care to make such a differentiation. Cabs are here to provide transportation, and it’s expected that they will adapt to the city and to the fares who look for them after a night at a club or a bar. When cabbies went on strike in 2007 to protest the PIM, the city took great steps to emphasize that transit would not be crippled, as though to minimize the significance of these ever-present yellow arthropods. 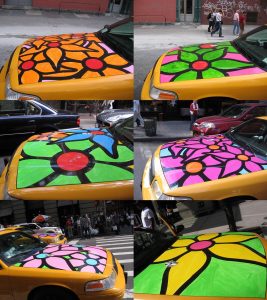 While it’s understandable that the city would want to minimize the significance of cabs, particularly in a strike situation, cabs have an undeniable presence.  In the fall of 2007, cabs were given the opportunity to participate in the Garden in Transit public art project. To mark the 100th anniversary of the motorized cab, cabbies could volunteer to have their taxis decorated with a flower decal created by children and adults in hospitals, schools, and communities around Manhattan as a form of creative therapy. The project did little to raise the status of cabs or their drivers in the public’s eye—according to responses at the Gothamist, most folks seemed to view the project as bland or wonder why real flowers weren’t placed in cabs to dispel unpleasant odors—but the flowered cabs did serve as a reminder that cabs are very much a part of city life however, as they quickly spread throughout the city and became a part of the social landscape. 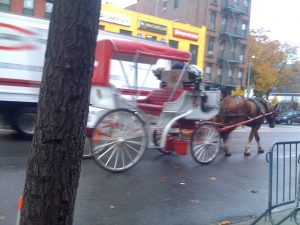 The “City That Never Sleeps” needs transportation beyond mass transit to move its inhabitants—this has been true from the very start.  So cabs are here to stay,

and their presence is decidedly mainstream (even if their drivers are kept on the fringes of society). Part of the reason cabs have survived in the face of more affordable rides, such as the subway and buses, is more than elitism: cabs offer a sense of safety which can be challenged underground late at night. And there are stories of cabbies who take their fare’s safety seriously. Undoubtedly, the old issues will be raised again as we search for cheap, reliable, and greener methods of transportation.  As for those relics of the cab industry, the hansom and hack cabs, they haven’t been completely eradicated—they’ve been relegated to the tourist trade and proffer rides around Central Park. [Image Left: A hack on Eleventh Avenue. Nov. 09.]
You know you have ’em, so share your taxi stories below.
Cited:
Hodges, Graham Russell Gao. Taxi!: A Social History of the New York City Cabdriver. John Hopkins University Press: 2007.