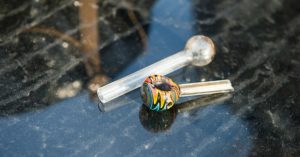 There were 574,640 arrests for marijuana possession nationwide in 2015—outnumbering arrests for all violent crimes combined. (Photo: Office of Public Affairs/flickr/cc)

‘Locking people up for using drugs causes tremendous harm, while doing nothing to help those who need and want treatment’

Two prominent human and civil rights organizations are calling on the U.S. government to decriminalize all drug use and possession in a new report which finds that the so-called war on drugs has caused “devastating harm.”

The joint report by Human Rights Watch (HRW) and the American Civil Liberties Union (ACLU) found that there were 574,640 arrests for marijuana possession nationwide in 2015—outnumbering arrests for all violent crimes combined—and that the massive enforcement of drug laws takes a toll at every level, from the individual to the institutional—ruining lives and pulling families apart, discriminating against people of color, and undermining public health.

In fact, the groups found, in the U.S., someone is arrested for low-level drug offenses every 25 seconds.

“Every 25 seconds someone is funneled into the criminal justice system, accused of nothing more than possessing drugs for personal use,” said the report’s author and HRW/ACLU Aryeh Neier fellow Tess Borden. “These wide-scale arrests have destroyed countless lives while doing nothing to help people who struggle with dependence.”

The long-term impacts of drug law enforcement range from the separation of families to lifelong discrimination, the report states. People arrested for drug use can be excluded from employment opportunities, housing and welfare assistance, and the right to vote, among other things. The organizations interviewed hundreds of drug users, family members of those prosecuted, government officials, defense attorneys, activists, and service providers, and analyzed data from Texas, Florida, New York, and the FBI.

One woman interviewed in the report, “Nicole,” whose name was changed for privacy, was held pretrial for months in Houston, Texas away from her three children and eventually pled guilty to her first felony—possessing an empty baggie with heroin residue. The conviction cost her student financial aid, employment opportunities, and the food stamps she used to feed her children.

“The felony conviction is going to ruin my life…I’ll pay for it for[ever]. Because of my record, I don’t know how or where I’ll start rebuilding my life: school, job, government benefits are now all off the table for me,” she states in the report. “Besides the punishment even [of prison]…It’s my whole future.”

“Under international human rights law, prohibited racial discrimination occurs where there is an unjustifiable disparate impact on a racial or ethnic group, regardless of whether there is any intent to discriminate against that group,” the report states. “Enforcement of drug possession laws in the U.S. reveals stark racial disparities that cannot be justified by disparities in rates of use.”

As the organizations point out, since the war on drugs was formally declared by President Richard Nixon in 1971, use has not significantly declined—and criminalization, coupled with a lack of treatment for addicts, forces users to go “underground,” exposing them to increased risk of disease, overdoses, and other dangers, while making it less likely that they will recover.

“While families, friends, and neighbors understandably want government to take action to prevent the potential harm caused by drug use, criminalization is not the answer,” Borden continued. “Locking people up for using drugs causes tremendous harm, while doing nothing to help those who need and want treatment.”

The report concludes by calling on state legislatures and U.S. Congress to decriminalize personal use and possession of all drugs, and invest in risk reduction and voluntary treatment programs.

“Criminalizing personal drug use is a colossal waste of lives and resources,” Borden said. “If governments are serious about addressing problematic drug use, they need to end the current revolving door of drug possession arrests, and focus on effective health strategies instead.”