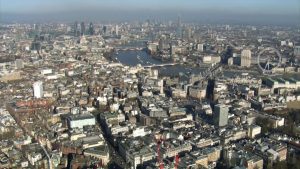 Lecture by Dr. Tristram Hunt at the Museum of London / 10.05.2016
Lecturer in Modern British History
Queen Mary University of London

On the 30 June 1997, after the ninety-nine year lease on the New Territories came to an end, Great Britain handed back Hong Kong to the People’s Republic of China.

At the stroke of midnight the Union Jack was lowered to the strains of ‘God Save the Queen,’ the Hong Kong police ripped the royal insignia from their uniforms, and Red Army troops poured over the border.

Steaming out of Victoria Harbour, as the Royal Marines played ‘Rule Britannia’ and ‘Land of Hope and Glory’, on the last, symbolic voyage of the Royal Yacht Britannia, Britain’s last governor, former Conservative Party chairman Chris Patten, wrote ‘that night we were leaving one of the greatest cities in the world, a Chinese city that was now part of China, a colony now returned to its mighty motherland in rather different shape to that in which it had become Britain’s responsibility a century and a half before.’

In London, the atmosphere was altogether shriller.  ‘The handover of Hong Kong to China strikes many westerners as a disgrace and a tragedy,’ thundered the Economist.  ‘Never before has Britain passed a colony directly to a Communist regime that does not even pretend to respect conventional democratic values.’

The diaries of Alastair Campbell, Prime Minister Tony Blair’s director of communications, describe the scene amongst the UK delegation preparing for the ceremonial.  ‘When someone referred to the Chinese as the “Dewhursts of Peking” there was a mild laugh around the table.  I looked at Chris Patten a bit bemused.  “Dewhursts as in butchers,” he said.’

Campbell thought it all a little self-indulgent, but when he caught site of the goose-stepping Chinese soldiers, he was hit by ‘the full awfulness’ of the handover.  ‘Then the flag came down, and theirs went up and it was all pretty sick.  Tony Blair hated it and it showed a little … I can’t believe that we could not have kept it.’

In his own memoirs, Blair recalls of the ceremony ‘a tug, not of regret but of nostalgia for the old British Empire.’  He also admits to a startling failure to appreciate the historic significance of the return of Hong Kong as a rising, newly prosperous China sought to take its place in the world and shed the memory of its ‘century of humiliation’ at the hands of British, French and American forces.

However, there was one member of the British delegation keener to cling on to the past.  In a confidential diary entry entitled, ‘The Great Chinese Takeaway,’ His Royal Highness the Prince of Wales laid bare his despair at seeing the Crown colony returned to the mainland.

Watching another piece fall from his family inheritance, the Prince lamented the ‘ridiculous rigmarole’ of meeting the ‘old waxwork’ Jiang Zemin, and the horror of watching an ‘awful Soviet-style’ ceremony in which ‘Chinese soldiers goose-step on to the stage and haul down the Union Jack.’

So heartening Prince of Wales doesn’t make these gaffes now… 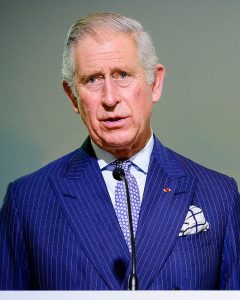 Charles Philip Arthur George Mountbatten-Windsor knew all too well that when his time came to assume the throne the loss of Hong Kong meant Britain’s imperial role would be long past.  ‘Such is the end of Empire, I sighed to myself.’

But if the British Empire has indeed come to an end, its legacies remain nonetheless apparent all around the world – and the most compelling of those phenomena still with us is the chain of former colonial cities dotted across the globe – from Dublin to Mumbai, Melbourne to New Delhi.

After sporting pastimes and the English language (to which might be added Anglicanism, the Parliamentary system, and Common Law), urbanism is arguably ‘the most lasting of the British imperial legacies.’

And this imperial heritage is now being preserved and restored at a remarkable rate as postcolonial nation’s debate the virtues and vices, the legacies and burdens of the British past and how they should relate to it today.

So my new book seeks to explore that imperial story through the urban form: ten cities charting the rise and fall of the British Empire.  It charts the changing character of British imperialism through the architecture and civic institutions, the street names and fortifications, the material culture and ritual.

The history of these cities also exposes how understandings of imperialism changed across time and space.  At times Britain was a mercantilist empire, at other times a free-trading empire; in certain periods, Great Britain was involved in a process of promoting Western civilization, at others in protecting multi-cultural relativism.

As Joseph Conrad’s Marlow acerbically notes in Heart of Darkness, it was an idea that had to redeem the practice of empire at any particular point.  ‘An idea at the back of it; not a sentimental pretence, but an idea; and an unselfish belief in the idea – something you can set up, and bow down before, and offer a sacrifice to…’

The ambition of the book was to explain how those ideologies of Empire were made flesh through the city – and, in the process, move the debate about our imperial past on from some of the narrow, binary definitions it has laboured under for the last decade or so.

Famously, in his 2003 book Empire: How Britain Made the Modern World, the historian Niall Ferguson made a stirring and influential case for the British Empire as the handmaiden of globalisation and force for progress.  ‘No organization has done more to promote the free movement of goods, capital and labour than the British Empire in the nineteenth and early twentieth centuries,’ he wrote.

By way of contrast, an increasing body of opinion has sought to cast British imperialism as a very bad thing.  In the words of the left-wing author Richard Gott, ‘the rulers of the British empire will one day be perceived to rank with the dictators of the twentieth century as the authors of crimes against humanity on an infamous scale.’

And much of Gott’s case has received official endorsement in recent years with a series of public acknowledgements by European governments of colonial crimes.  In 2004, Germany apologised for the massacre of 65,000 Herero peoples in what is now Namibia; in 2008 Italy announced it was to pay reparations to Libya for injustices committed during its thirty-year rule of the north African state.

Then, in 2013, the United Kingdom government (having apologised for the Great Famine of 1845-52 and expressed official regret over Britain’s role in the Atlantic slave trade) was forced by a High Court judgement to announce a £20 million compensation package for 5,228 Kenyan victims of British abuse during the 1950s Kenya Emergency or Mau Mau Rebellion.

The danger now is that as the legacy of Empire moves into the realm of official apologies, law suits and compensation settlements, the space for detached, historical judgement has perceptibly narrowed.  What is more, as Linda Colley has suggested, ‘one of the reasons why we all need to stop approaching empire in simple “good” or “bad” thing terms, and instead think intelligently and enquiringly about its many and intrinsic paradoxes, is that versions of the phenomenon are still with us.’

And it is the very complexity of the urban past which allows us to go beyond the ‘good’ and ‘bad’ cul-de-sac of so much imperial debate.  The history of colonialism covered in this study suggests a more diffuse process of exchange, interaction and adaptation.  Which also shaped us as much as it shaped the world.

So, what does the history of these cities reveal? 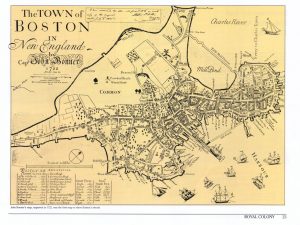 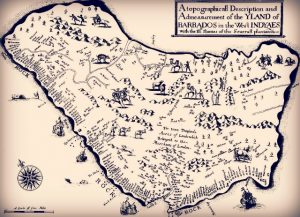 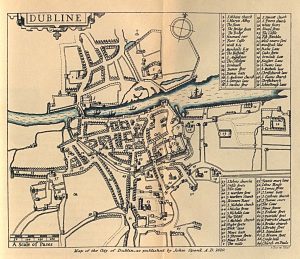 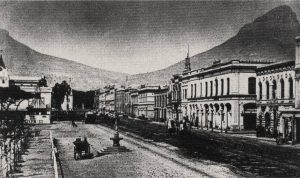 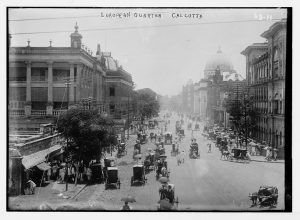 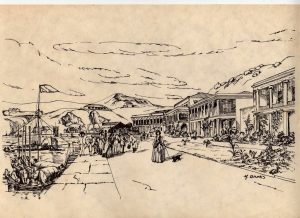 View of Spring Gardens – Colonial Hong Kong 1850 – from a set of pen and ink sketches of colonial scenes at mid-19th century by Australian artist Howard Banks. A copy of the work of Murdoch Bruce (1846). 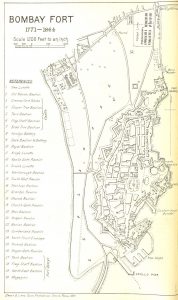 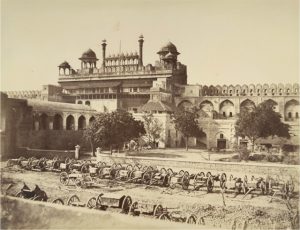 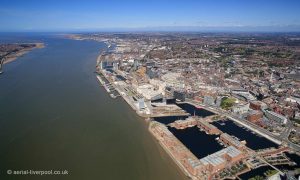 ‘Liverpool was called into being … as a junction for the landing, embarkation and storage of vast wealth exchanged between the North and Midlands of England and the overseas world.’   The Mersey docks brought in the raw materials from West Africa, the West Indies and North America (timber, sugar, grain), and then shipped out finished wares, (Birmingham’s metal goods, Staffordshire ceramics, Sheffield steel, to the world markets.  Above all, it was the cotton industry that secured Liverpool’s exponential growth.

To the ends of the earth.  ‘In olden times it used to be said that “all roads lead to Rome.”  Today all seas lead to Liverpool,’ chimed the Liverpool historian WT Pike.  ‘There is no part of the globe, however remote, whose natives may not be met on the Liverpool landing stage, and there is no territory so distant whose products do not pass from time to time through the docks and warehouses of Liverpool and Birkenhead.’

Multicultural city: ‘Unlike the dwellers in most English towns, all of us in Liverpool are, to a great extent, citizens of the world,’ explained the Liverpool Critic of 1877, ‘for everything around us tells us of far-off countries and foreign ways, and in our midst are constantly natives of so many distant lands that we insensibly imbibe and learn to practice peculiarities not British.’

No city more affected by the end of Empire.  The move away from a British economy based around raw material production on the edges of Empire and manufacturing production at the core –with the import-export trade that all entailed – could only signal a killer-blow to the shipping, storage, insurance, finance, trading and general entrepot activities of Merseyside.  The port of Liverpool had been made by Empire, and as decolonisation gathered pace, it was apparent the city would be unmade by the end of Empire, just as rapidly and messily as those final years of imperial retreat.

So, finally, this book traces how the rise and fall of Empire has affected not only the history of former colonial cities – but also the story of our own urban past.

And nowhere more so than in Liverpool.  For Liverpool’s civic leaders have concluded regeneration lies with the remnimbi: the city has ‘twinned’ with Shanghai (whose celebrated pedestrian promontory, the Bund, was inspired by elements of the Liverpool Waterfront), despatched Everton Football Club on a series of ‘soft-power’ friendlies, spruced up its own ‘China-town.’

Driving this Sino-Scouse collaboration is the Peel Group, which is hoping to revive the region’s entrepot economy with its £10bn Liverpool Waters and Wirral Waters redevelopment scheme.   It is now a different empire that the Port of Liverpool is servicing.

In a total reversal of Lancashire and Liverpool’s old export economy, the plan is for Chinese imports to be delivered straight to the north-west of England, sailing down the Mersey and then transported along the Ship Canal.

In 2010 the Wirral Society of local conservationists condemned those ‘who are dead set on restructuring the riverside entrance into the port of Liverpool in the style of Sydney, New York or Shanghai.’  In the diffident language of a regional conservation group, they suggested, ‘it is very feasible that many Wirralians will not like the idea of being Shanghai’d.’

But new empires are rising – and their force will be felt in a new generation of imperial cities across the globe.