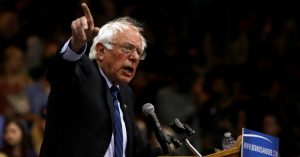 At the Democratic National Convention, “delegates will decide which candidate is the strongest nominee to take on Donald Trump in November,” Bernie Sanders said on Tuesday night. “All of the evidence indicates that I am that candidate.” (Photo: Reuters)

Last week, Reuters/Ipsos poll had Clinton ahead of Trump by around 13 points. Today, they’re running neck-and-neck.

The poll released Wednesday found 41 percent of likely voters supported Democratic frontrunner Clinton, and 40 percent backed Trump, with 19 percent not decided on either yet. Clinton led Trump by around 13 points in the same poll just one week ago, and thus the results represent a big jump for Trump since GOP hopefuls Ted Cruz and John Kasich withdrew from the race.

The candidates’ choice of running mates could also be important. Voters surveyed in the poll said they would be more likely to support Clinton if her choice for vice president was a liberal, while Trump would help his chances if he picked someone experienced in politics and someone who is “consistently” conservative.

The Reuters/Ipsos poll did not present a match-up between Bernie Sanders and Trump, but recent surveys, including two released Tuesday, show the Vermont senator holding a more secure national lead against the former reality TV star and real estate mogul, and also doing better than Clinton against Trump in major swing states.

Still, The Hill reported Wednesday, Democrats appear to be “brushing off” such poll results.

“It’s May—and I’m pretty sure no general election was ever decided in May,” one Democratic strategist, who asked to remain anonymous, scoffed to The Hill.

“Folks shouldn’t read too much into these polls,” added Jim Manley, a former aide to Senate Minority Leader Harry Reid (D-Nev.). “There is a long way between now and November, and I continue to believe that Donald Trump is highly radioactive when it comes to the general election.”

It is all but impossible to find a Democratic strategist who believes that Clinton will lose the general election, but some do urge caution, suggesting that Trump’s appeal should not be underestimated.

“A lot of Democrats, labor people, liberals, think this is a done deal,” said Democratic strategist Brad Bannon. “And I keep saying, ‘We have underestimated Trump before, don’t do it again.’ I, personally, am cautious. Trump has a way of reaching people’s emotional gut level that neither Bernie Sanders nor Hillary Clinton have.”

One person who isn’t underplaying the polling is Sanders himself. “After all the votes are cast and counted and this contest moves to the Democratic National Convention in Philadelphia,” he said after winning the West Virginia primary on Tuesday, “the delegates will decide which candidate is the strongest nominee to take on Donald Trump in November. All of the evidence indicates that I am that candidate.”

The email read in part:

For months, Bernie Sanders has out-polled Hillary Clinton against Donald Trump, and often by extraordinarily large margins. Because we must do everything we can to defeat Trump in November, our mission is to win as many pledged delegates as we can between now and June 14.

Then we’re going to have a contested convention where the Democratic Party must decide if they want the candidate with the momentum who is best positioned to beat Trump, or if they are willing to roll the dice and court disaster simply to protect the status quo for the political and financial establishment of this country.

“The idea that Clinton is in a dead heat with Trump in the three most important battleground states at a time when Trump is the most unpopular major-party candidate in American history is horrifying to Democrats,” Abramson argued at the Huffington Post.

How horrifying it is cannot be overstated; along with recent polling showing Clinton tied nationally with Trump, and the fact that Hillary’s unfavorables are already rising while Trump’s are already falling, and the fact that the Republican Party is uniting dramatically behind Trump precisely because Clinton looks to be the likely Democratic nominee, the fact that Hillary is already struggling in Ohio, Florida, and Pennsylvania against an absolute buffoon of an opponent is causing Democrats to worry that she actually can’t win.

“And,” Abramson pointed out, “they may well be right.”

The Reuters/Ipsos poll surveyed 1,289 people from Friday to Tuesday, with a margin of error of +/- 3 percentage points.