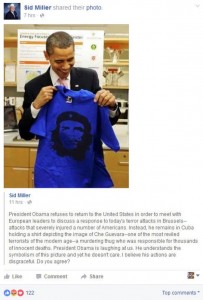 This photograph was used by Texas Agricultural Sid Miller to lambaste President Obama for being in Cuba while holding a Che t-shirt during the Brussels attacks.  The problem?  The photo is a doctored fake.

The actual photo was taken at MIT in Cambridge in 2009, and the t-shirt did not have Che on it.  Instead, it showed an imprint with the continuity equation and the Navier-Stokes equations (of motion) for incompressible flow.  The photo was used by a hoaxer and that equation removed and replaced with the image of Che.

Commissioner Miller, already known for strangeness and opening his mouth before his brain (or research) engages, just continues to make himself look like a complete fool.

There will likely be no apology forthcoming.  After all, he didn’t know it was a hoax!  Not that it matters – it will be a cold day you-know-where before Miller apologizes to the president for anything.