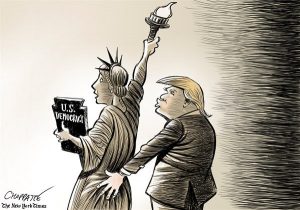 Many Americans are eager for the election to be over. They will finally be able to put down the mirror. But the face will remain disfigured and…

A timely visit to the American capital is a reminder that, unique among functioning democracies, Americans lavish kingly privileges on their presidents in a manner that is so extravagant, it would make actual monarchs blush. So when the nation prepares to anoint a knave or a joker as the new sovereign, it causes understandable distress.

I was at the Capitol in January 2009 for the inauguration of President Barack Obama, when, in great biblical style, the crowd gathered to anoint the messianic Obama king. It was a curious episode for a proud republic, but back then it was the season of hope and change.

Now it is the season of fear and, instead of change, confirmation of what America is really like, not what it aspires to be. Hillary Clinton was such a consensus choice among Democrats that all credible candidates declined to run against her. Donald Trump triumphed over the most extensive field of accomplished candidates in the history of the Republican Party. The 2016 election has held up a mirror to America, and she is not beautiful.

In January, there will be a 70-year-old man in the White House with a lifetime history of lechery – certainly sexual harassment and likely sexual assault. All that is to be determined is whether he will be in the West Wing (Trump) or the East Wing (Bill Clinton).

It seems a turning point was reached when it was revealed that Trump spoke about women as disposable sexual objects. America was horrified that such things still happened. It had, after all, been 13 years since Arnold Schwarzenegger was elected governor of California, the largest and most proudly progressive state in the union, after a campaign in which there were not revelations of nasty “locker-room” talk in his past, but actual locker-room episodes of passing around women who were violated and then tossed aside like used towels.

Schwarzenegger, the fantasy action-adventure hero who became an actual governor, was the first fruit of a reality show culture that peddles the degradation and humiliation of others as entertainment. Reality show America nominated Trump for president and elected Conan the Barbarian as governor of California. The latter was clever enough to marry into the Kennedy clan, which gave him cover for beastliness toward women. 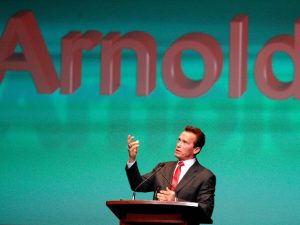 Schwarzenegger himself was preceded in ascension to high office by Jesse “The Body” Ventura, a professional wrestler elected governor of uber-progressive Minnesota in 1990, who, incidentally, also starred with Schwarzenegger in Predator. Professional wrestling was the original reality television, where buffoons say outrageous – even violent and racist – things, but it’s all supposed to be in good fun.

The long migration of such noxious buffoonery from the fringe of American culture to the mainstream has had several signature moments, the most prominent of which was Muhammad Ali, who, despite his admirable virtues, introduced America to the culture of vanity and disparagement that he self-consciously copied from wrestler Gorgeous George. From Gorgeous George, to Ali, to Schwarzenegger, to Trump – these men track the descent of American culture. Politics, as has been often remarked, is downstream of culture.

Hillary Clinton represents the apex of another generations-long degradation of American politics: namely, the use of public office as a means of personal enrichment. Her middling performance as secretary of state was nevertheless a bonanza for her family, as she and the Clinton foundation elevated to an art form for the practise of influence-peddling, as it was known in a more honest time. It was likely the desire to keep that sordid and lucrative operation secret that made her willing to endanger U.S. security with her private email server and to cover it up with the deletion of tens of thousands of emails. 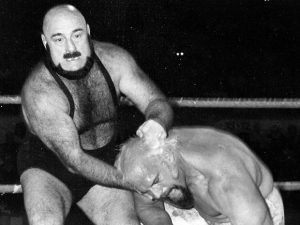 Soon, a new family will move (back) into the White House. If it’s Trump’s family, one only imagines the vulgarity that would ensue, perhaps with a shiny gold Trump logo emblazoned in the Roosevelt Room. If the Clintons return, deprived of selling access with their foundation, it might be time to revive their tacky practice of renting out the Lincoln Bedroom to major donors.

Many Americans are eager for the election to be over. They will finally be able to put down the mirror. But the face will remain disfigured and diseased.