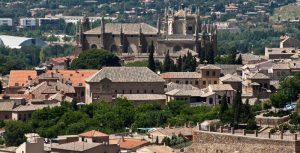 View of Toledo, Spain with the Samuel Halevi Abulafia synagogue at the center and the Monastery of San Juan de los Reyes in the background (photo: Yildori, CC BY-SA 3.0) 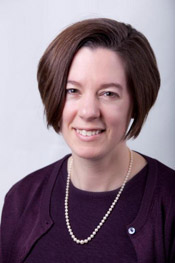 By the time the first surviving synagogues were built in Spain, Jews had lived there for more than a thousand years. The first Jews likely arrived on the Iberian peninsula among the Roman conquerors and colonizers who flowed there in the first century C.E.  Jews were persecuted by Christians during the Late Antique period (beginning in the 4th century), but when Muslim rule was established in 711, the legal and economic status of Jews improved. Often well integrated into the governments and economies of the cities in Muslim Al-Andalus, many Jews spoke Arabic and wore the same clothes as their Muslim neighbors.

Although population estimates for pre-modern periods are notoriously unreliable, one scholar has estimated that the Jewish population of Spain grew to be larger than the Jewish populations of every other part of the medieval world combined. Given the size and wealth of the Spanish Jewish communities of Al-Andalus, we can be certain that they built many synagogues in the quarters of the cities where they lived, but none survive from before the south of Spain was reconquered by northern, Christian rulers. Spain’s most remarkable medieval synagogues are found in former Islamic capitals, but they were built after these cities were again governed by Christians. 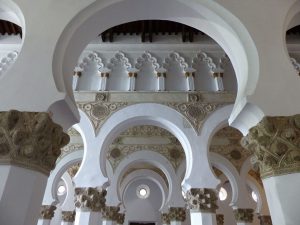 By the late Middle Ages, there were at least eleven synagogues in the city of Toledo in central Spain. Two of these—the Samuel Halevi Abulafia synagogue and the Ibn Shoshan synagogue—stand only a few blocks apart in the old Jewish quarter. Both synagogues display a style inspired by the Islamic buildings that surrounded them, sometimes called Mudéjar. This style was used by Muslim, Christian, and Jewish patrons and builders living in  parts of Spain formerly governed by Muslims. The earlier Muslim builders had themselves borrowed from the cultures that preceded their arrival by including details that had been popular with Romans and Late Antique Christians in Spain, such as reused columns, Corinthian capitals and horseshoe arches. 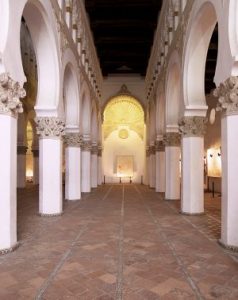 The Ibn Shoshan Synagogue was likely first built around 1180, and was probably renovated by a member of the Spanish royal court in the thirteenth century before it was converted into a church (renamed Santa María la Blanca) in 1411. The bimah, Torah ark, and seats for the congregation were destroyed when the building was converted into a church. All that remains from the synagogue is the architecture. 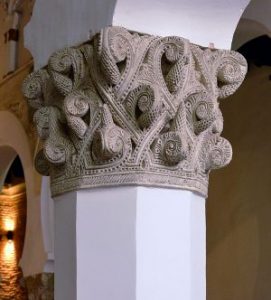 The interior is divided into five aisles by four rows of stout octagonal piers. The piers carry rows of capitals decorated with stucco pinecones and volutes, surmounted by giant horseshoe arches.

Above the arches are layers of low-relief stucco tendrils and roundels, scallop shells, geometric interlacing, and rows of blind arches with multiple lobes (called poly-lobed arches), a wealth of surface decoration that recalls the type found in earlier Spanish buildings like the Great Mosque at Cordoba.

We know this wasn’t simply a local Toledan style, but one popular in other parts of Spain, because the Jewish community to the north in Segovia built a very similar synagogue, now destroyed, at almost the same time.

A private synagogue for a royal advisor 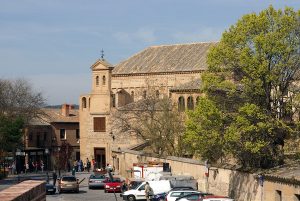 Almost two hundred years later, around 1360, a new synagogue was built in a different but related style by Samuel Halevi Abulafia, treasurer and advisor to the Spanish King Pedro I of Castile. Unlike the Ibn Shoshan synagogue, this one was private, and attached to Halevi’s palace, although it would have been a significant monument in the neighborhood given its height.

Instead of being divided into aisles by rows of arches, the Samuel Halevi Abulafia synagogue (later known as the church of El Transito de Nuestra Señora) is dominated by a soaring, open hall that is oriented towards a triple-arched Torah niche. The upper parts of the interior walls and the wall surrounding the Torah niche are blanketed with low-reliefstucco decoration. 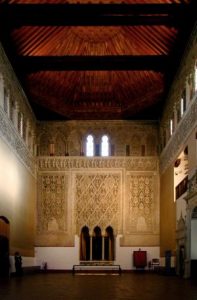 Right underneath the decorative wooden ceiling are ranks of colonnettes supporting poly-lobed arches that hug the wall, very similar to those at the Ibn Shoshan synagogue nearby. Below these are geometrically organized patterns of leaves, flowers, scallop shells, and interlacing tendrils, as well as the coat of arms of the Kingdom of Castile (a three-turreted castle). A wealth of Hebrew and Arabic inscriptions praise King Pedro, the building’s architect, Don Meir Abdeil, and the royal treasurer and patron of the synagogue, Samuel Halevi, who is described as “prince among the princes of the tribe of Levi.” Inscriptions also quote literary and religious texts, including the Bible and the Qur’an. 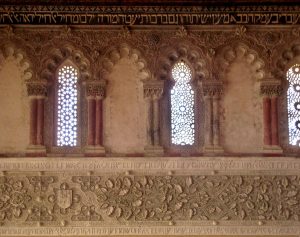 This was the same style that King Pedro (who was Catholic) favored in his own palace architecture, making it a decorative language common to the Muslim, Christian and Jewish elites. Samuel may have wanted to celebrate his own integration into the power center of the kingdom by imitating its court style, but unfortunately his success was short-lived. Soon after the synagogue was completed, Pedro had him arrested, tortured, and executed.

Though the Jewish population in Spain was increasingly persecuted and finally in 1492, officially banished (unless they converted to Christianity), these synagogue structures attest to their long presence, and to the close interconnections between Muslim, Jewish, and Christian cultures in medieval Spain.

History of Santa María la Blanca on toledomonumental.com (in Spanish)

Website of the Museo Safardi, El Transito (in Spanish)

History of the El Transito Synagogue from Beit Hatfutsot, The Museum of the Jewish People

R. Wischnitzer, The Architecture of the European Synagogue (Philadelphia, 1964), p. 35.