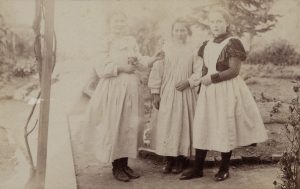 A collection of photographs from Ottoman Turkey offers a complex encounter with collective memory.

Before coming across the Pierre de Gigord Collection, I had been thinking about photographic memory in a literal sense: how memories exist physically within the surface of the photographic medium, how stories embed themselves in images captured on film or other media, how we relate to these images, and how we might use them. This interest is not only mine: various artists have addressed photographic memory in relation to the archival turn, often by articulating their works around the tension between the historical and the personal.

Understanding the link between memory, both personal and social, and different kinds of archives represents a key step towards understanding the archival turn in contemporary art. As Okwui Enwezor argues in Archive Fever, photographs are a priori archival objects:

From its inception, the photographic record has manifested “the appearance of a statement as a unique event.” Every photographic image has been endowed with this principle of uniqueness… The capacity for accurate description, the ability to establish distinct relations of time and event, image and statement, have come to define the terms of archival production proper to the language of those mechanical mediums, each of which give new phenomenological account of the world as image. Photography is simultaneously the documentary evidence and the archival record of such transactions. 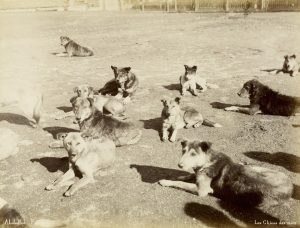 In this sense, the archive shares with the photograph its status as a memento mori, because they both act as embodiments of memory—as markers of our knowledge of a singular event in the past. Coming from the ever-shifting geopolitical landscape that is contemporary Turkey, I’ve always been interested in archives. The multifaceted questions that arise at the encounter between personal and collective memory, and their impact on our sense of identity, frequently appear in my work as an artist.

Within my practice I’ve repeatedly looked in two directions at once: turning to the past in order to make sense of something in the present. Archives, particularly photographic archives, embody this as a given. Within the Middle Eastern context, however, images documenting the region’s history, images produced by those who lived and breathed it, are scarce.

When I discovered the Pierre de Gigord Collection during my graduate internship at the Getty Research Institute, I expected to find only a variety of romanticized images of the Middle East. Indeed, as Ali Behdad points out in his book Camera Orientalis: Reflections on Photography of the Middle East, Gigord traces the origin of his collection to his “Orientalist adventure” in Turkey. Nevertheless, despite Gigord’s collecting intentions, his collection sheds light on an important aspect of Ottoman history because it includes a large number of images taken by Armenian photographers. This archive thus allows us to unearth the stories of many Armenian artists and craftsmen who pioneered the medium in the Ottoman Empire. 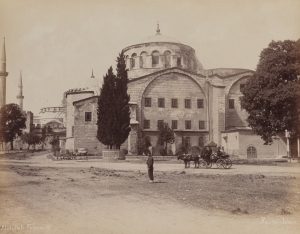 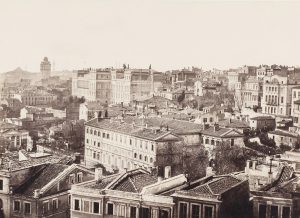 The daguerreotype process, which was used by photographers in the early 1850s, required advanced technical knowledge and skill. Due to the frequent employment of Armenians as chemists, goldsmiths, and pharmacists during the Ottoman era, many Armenians had the range of skills necessary—most importantly a deep knowledge of chemical processes—to work with the daguerreotype once it was introduced to the empire. The Gigord collection contains a wide range of photographs taken by Armenian photographers such as Pascal Sébah, Gülmez, and Abdullah Frères, and it provides through them a compass to locate where all the old studios on the Grand Rue de Pera once stood. In the nineteenth century, Pera was home to many foreign embassies and was a popular spot for Ottoman intellectuals, and the local Italian and French Levantines, which then provided a viable commercial setting for the studios. In 1857 Pascal Sébah opened his El Chark studio at 439 Grand Rue de Pera, while the Abdullah Frères moved their initial studio from Beyazid to Pera in 1860 to be relocated among other studios of international fame, such as those of Félix Bonfils and Vasilaki Kargopoulo, whose photographs were all collected by Pierre de Gigord.

The archive also allows exploration of different materialities within photographic prints made in the late nineteenth century, as well as of early techniques that made these materialities possible. For instance, one of the many factors that set apart the Abdullah Frères from the crowd—other than their superlative artistry—was their photo varnish, developed by Kevork Abdullah. As Engin Özendes reveals in Abdullah Frères: Ottoman Court Photographers, Kevork’s formula included a heavy dose of collodion, which made photographs taken by the Frères appear brighter and last longer. Going through the archive, one can still notice the brightness of the photographs taken by the Abdullah Frères and appreciate the tonal differences caused by the various types of varnish and techniques used by different studios.

The photographs also act as testimonies of relationships, as the archive allows the researcher to trace family relations within the Armenian diaspora prior to 1915. For instance, the Balyan family, a prominent Ottoman Armenian family of court architects, built the Çırağan Palace, which was then photographed by the Abdullah Frères. Both families, who worked for the Ottoman court, are known to have had close ties. 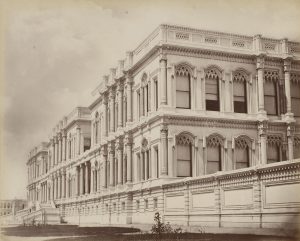 In Turkey belonging comes at a cost, as one is expected to disremember certain histories and to perform the frequent retelling of others. In this sense the landscapes and scenes of daily life captured by the Sebah Joillier and Abdullah Frères serve as important documents, memorial holders of an obliterated past. In a faded image taken at Yüksek Kaldırım, there are various shop signs, such as the Droguerie Akestorides, its characteristic name reminiscent of the multicultural past of this commercial street in Pera, now Beyoğlu, but also of the drastic demographic changes the street went through in the period leading up to the Istanbul pogrom of the 1960s. This photograph is not only fundamentally important as a historic document but also as a statement of tenancy and belonging. As Hal Foster writes in his seminal essay “The Archival Impulse”: “In the first instance the archival artist seeks to make historical information, often lost or displaced, physically present.” 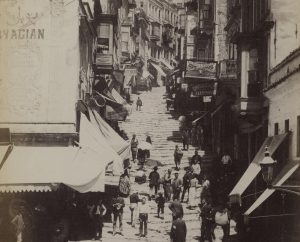 Every time I focus on the links between memory and the construction of identity, I’m reminded how nations repeat certain stories to anchor their existence. Through the images in the Pierre de Gigord Collection, their distant makers remind me then of the silencing of certain memories that can never entirely be repressed.