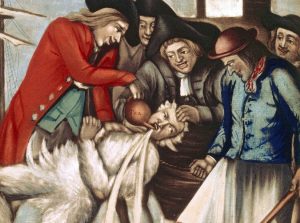 The Bostonians Paying the Excise-man, or Tarring and Feathering, Von Karkatir / Public Domain

The Boston Tea Party, which involved the willful destruction of 342 crates of British tea, proved a significant development on the path to the American Revolution. 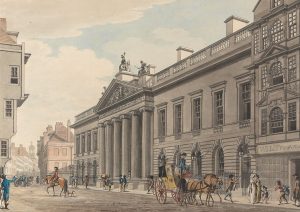 After the conclusion of the Seven Years’ War in 1763, the British Empire was in financial distress. Though the British had won the war, they had spent vast amounts of blood and treasure in the process. At the end of the war, the British Parliament sought to replenish its depleted coffers by taxing the North American colonies.[1]

When the British Prime Minister, Lord North, proposed the Tea Act in May 1773, he was not even thinking of the North American colonies, but rather of the East India Company, which had assumed control over India. In exchange for the power to appoint its governors, North loaned the company £1.5 million—the equivalent of about $270 million today.[2] North also granted the company a monopoly on the right to sell tea in the North American colonies. 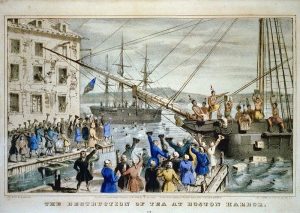 As the British authorized the shipment of thousands of pounds of tea to its colonies in North America—Boston, Charleston, New York City, and Philadelphia—colonial tea merchants protested.

In Boston, Governor Thomas Hutchinson, a pro-British Loyalist, demanded that the ships be allowed to dock and that colonial merchants pay the duties on the cargo. Boston was the center of colonial revolutionary fervor, and its radicals did not take kindly to Hutchinson’s demands. The Sons of Liberty, a secret society formed by radical colonists to protest British taxation policies after the passage of the Stamp Act in 1765, spearheaded the opposition to the Tea Act[3]

On December 16, 1773 at Griffin’s Wharf, a group of approximately 50 Bostonians disguised as Native Americans boarded the ships Beaver, Dartmouth, and Eleanor, and proceeded to dump 342 crates of tea into the Boston harbor. In doing so, they destroyed almost 10 thousand pounds sterling worth of tea—worth about $1.7 million today—that belonged to the British East India Company. The incident, referred to at the time by John Adams as the Destruction of the Tea, would not become known as the Boston Tea Party for another fifty years.[4]

Paul Revere carried the news of the destruction of the tea to New York, which in turn refused to allow the British ships to unload. In Philadelphia, as well, townspeople gathered to turn the British ships away from harbor. In Charleston, the ship was docked, but customs officials seized the cargo.

The British Empire Strikes Back

Instead of reforming their tax policies or accommodating the demands of the colonists, the British responded to the incident by passing the Coercive Acts, which shut down Boston’s port, modified the charter of Massachusetts—effectively shutting down the colony’s legislative assembly—and sent British troops under General Thomas Gage to occupy Boston.[5]

Gage was appointed governor, with broadly expanded powers to appoint local sheriffs, lodge troops in private homes, and deny townspeople permission to hold meetings. In response, the colonies called for a continental congress. The First Continental Congress convened in the autumn of 1774 and approved a general boycott of British goods. The stage was set for the ultimate showdown between the British and the colonies in the American War for Independence.