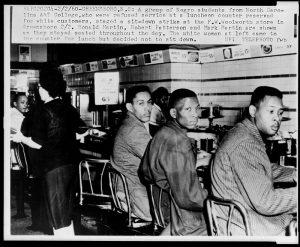 On February 1, 1960, a new tactic was added to the peaceful activists’ strategy – the sit-in.

By 1960, the Civil Rights Movement had gained strong momentum. The nonviolent measures employed by Martin Luther King Jr. helped African American activists win supporters across the country and throughout the world. 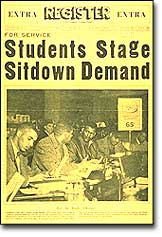 Students from across the country came together to form the Student Nonviolent Coordinating Committee (SNCC) and organize sit-ins at counters throughout the South. This front page is from the North Carolina A&T University student newspaper. / Creative Commons

On February 1, 1960, a new tactic was added to the peaceful activists’ strategy. Four African American college students walked up to a whites-only lunch counter at the local Woolworth’s store in Greensboro, North Carolina, and asked for coffee. When service was refused, the students sat patiently. Despite threats and intimidation, the students sat quietly and waited to be served.

The civil rights sit-in was born.

No one participated in a sit-in of this sort without seriousness of purpose. The instructions were simple: sit quietly and wait to be served. Often the participants would be jeered and threatened by local customers. Sometimes they would be pelted with food or ketchup. Angry onlookers tried to provoke fights that never came. In the event of a physical attack, the student would curl up into a ball on the floor and take the punishment. Any violent reprisal would undermine the spirit of the sit-in. When the local police came to arrest the demonstrators, another line of students would take the vacated seats. 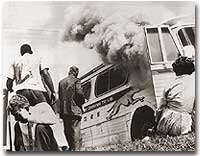 To challenge laws that kept interstate bus trips segregated, black and white students organized freedom rides through the South. The first such ride was interrupted when an angry mob attacked riders and destroyed their bus during a stop in Alabama. / Creative Commons

Sit-in organizers believed that if the violence were only on the part of the white community, the world would see the righteousness of their cause. Before the end of the school year, over 1500 black demonstrators were arrested. But their sacrifice brought results. Slowly, but surely, restaurants throughout the South began to abandon their policies of segregation.

In April 1960, Martin Luther King Jr. sponsored a conference to discuss strategy. Students from the North and the South came together and formed the Student Nonviolent Coordinating Committee (SNCC). Early leaders included Stokely Carmichael and Fannie Lou Hamer. The Congress on Racial Equality (CORE) was a northern group of students led by James Farmer, which also endorsed direct action. These groups became the grassroots organizers of future sit-ins at lunch counters, wade-ins at segregated swimming pools, and pray-ins at white-only churches. 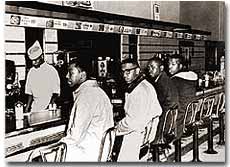 Bolstered by the success of direct action, CORE activists planned the first freedom ride in 1961. To challenge laws mandating segregated interstate transportation, busloads of integrated black and white students rode through the South. The first freedom riders left Washington, D.C., in May 1961 en route to New Orleans. Several participants were arrested in bus stations. When the buses reached Anniston, Alabama, an angry mob slashed the tires on one bus and set it aflame. The riders on the other bus were violently attacked, and the freedom riders had to complete their journey by plane.