A mythical bird that foretold if you would live or die, the caladrius was likened to Christ in the medieval bestiary. 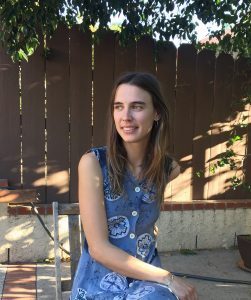 Birds have been associated with omens for millennia—think of the augury involved in the founding of Rome, or of Hitchcock’s The Birds. The story of the caladrius illustrated in the pages of the medieval bestiary fits squarely in this tradition. Placed alongside actual birds like the eagle or pelican in such books was the mythical caladrius, a bird imbued with the powers of prophecy…and medicinal dung.

With a simple glance, the caladrius could tell you if you would live or die. Said to reside in the court of kings, a caladrius would be brought to the bedside of an ailing patient. If the caladrius looked away from the unlucky convalescent, their fate was sealed—they would die. But if the prognosticating bird did not look away, the patient would be cured. Through the caladrius’s gaze, the sickness was taken up into the bird itself, which then flew toward the sun where the malady would be burned up and destroyed.

Not only could the caladrius foretell the fate of a suffering patient, but its dung was said to heal the blind. Sometimes the bird’s thigh bone was given this medicinal quality instead: depending on the translation of the bestiary text (or perhaps the censorship of a discerning monk), the word for dung, fimus, was occasionally replaced by the word for thigh bone, femur.

Before the caladrius became an allegory for Christ in the bestiary, it cropped up in several ancient texts as a real-life bird. Early Greek authors including Aristotle variously describe the caladrius (or charadrius) as a cave-dwelling or water bird. In the ancient Atharaveda, a bird with the ability to cure jaundice appears. In Leviticus and Deuteronomy in the Old Testament, the caladrius occupies the list of unclean animals, prohibited for human consumption.

Modern scholars have searched for the caladrius’s true origin, but in vain. Its importance to the medieval reader lay not in its qualities as a bird, but in its ability to convey a moral about Christian behavior. 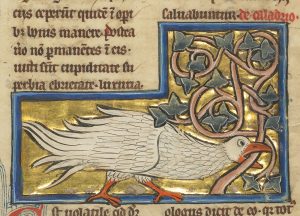 The caladrius posed a problem for the medieval artist: what does a mythical bird look like? Despite its imaginary status, the caladrius was regularly depicted resembling a type of dove or seagull, and almost always with pure white feathers. Though earlier texts on animals devoid of Christian symbolism did illustrate the caladrius using a spectrum of colors, it is typically white within with the medieval bestiary tradition.

The caladrius is most often illustrated in the middle of its story. The bird is perched on the bed of the sick, either looking at the patient to indicate a happy ending or facing away to presage a tragic end. Often the supine human is painted reacting to the bird, either with elation or misery. The variety of figures and emotions contained in the scene allowed artists to be creative and presented them with a radical choice—would the sick person survive or perish? 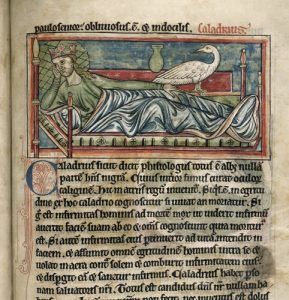 The Caladrius and a Sick King (detail) in a bestiary, about 1230–40, unknown artist, made in England, possibly Salisbury. Pigment on parchment, 30.8 x 23.2 cm. The British Library, Harley Ms. 4751. Digital image: British Library

Some scholars have suggested that the choice between a scene of hope and one of despair could have been the result of the artist’s historical context. The initiation (and failure) of the Crusades, or outbreaks of plague in Europe, may have darkened the mood of the bestiary artist and colored his artistic choices.

The caladrius appears in secular medieval literature as well as religious texts. For example, in The Bestiary of Love, a man compares a lady to the caladrius. He complains that he is lovesick, and because she has turned away from him like the caladrius, refusing his advances, he may as well be dead.

Today the story of the caladrius may seem like a distant and rather absurd fantasy, but who among us can’t relate to a desire to heal the sick, or the suffering of lovesickness?

Druce, George C. 1912. “The Caladrius and Its Legend, Sculptured upon the Twelfth-Century Doorway of Alne Church, Yorkshire.” Archaeological Journal 69: 381–416.