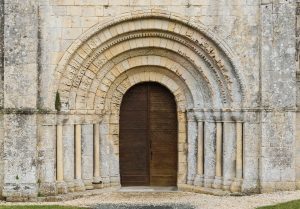 The Catholic Church from late antiquity to the early medieval era served as a seque from Graeco-Roman belief systems and influence to a new religious, economic, and sociopolitical context.

The Catholic Church was the one institution in the Middle Ages that was outside of the Feudal Order of both the rural Manors and the town Guilds. The Church, at various times, may have formed alliances, made political compromises, and sanctioned conduct and laws that were contrary to the spirit and the letter of the Church’s doctrine, but these were argued to be “expediencies” of the short-run to preserve the independence and moral authority of God’s institution on Earth so that it might serve the long-run purpose for its existence – the salvation of souls before the final Day of Judgment.

“Earthly” Purposes of the Church 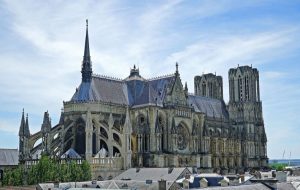 There was also the fact that the Catholic Church and its leaders often had their own “Earthly” ambitions for wealth, power, and political control, even declaring and participating in wars of conquest with the Church’s own armies under the command of the Pope.

In his book, Nationalism and Culture (1947), Rudolf Rocker explained the use of Church power during the Papal reign of Innocent III (1198-1216):

Innocent forced the whole temporal power of Europe under his will. He not only interfered in all dynastic affairs, he even arranged the marriages of the temporal rulers and compelled them to obtain a divorce in case the union did not suit him …

Innocent thought of himself as pope and Caesar in one person and saw in the temporal rulers only vassals of his power, tributary to him … By the establishment of oral confession and the organization of mendicant monks, Innocent created for himself a power of tremendous scope. Furthermore, he made free use of his strongest weapon, the ban of the church, which with unyielding resolution he imposed upon whole countries in order to make the temporal rulers submissive to him.

In a land hit by the ban all churches remained closed. No bells called the faithful to prayer. There were neither baptisms nor weddings, no confessions were received, no dying were given extreme unction and no dead buried in sanctified ground. One can imagine the terrible effects of such a status on the spirit of men at a time when faith was regarded as supreme.

Just as Innocent tolerated no equal power, he likewise permitted no doctrine which departed in the least from the usage of the church, even through entirely imbued with the spirit of true Christianity … The dominant ambitious spirit of this fearful man balked at no means to guard the unlimited authority of the church.

The unbending tyranny of this theological authoritarianism that all were expected to obey, and for which they were to altruistically sacrifice, even enveloped Innocent III himself. Rocker quotes Innocent as having once said, “I have no leisure to pursue other worldly things; I can scarcely find time to breathe. Truly, so completely must I live for others that I have become a stranger to myself.”

The Church’s Cosmopolitan Presence and Influence 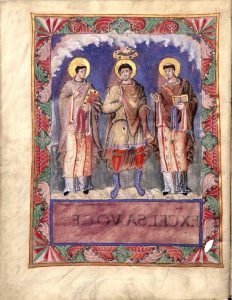 The Church’s position made it unique in another way as well. The Church’s domain was neither a single country nor region. Its offices and representatives were located in every part of the European continent in which Christianity had triumphed.

The Church’s representatives all shared a common value system – Christian church doctrine. They all spoke through the common language of Latin for the sharing of religious, philosophical, and administrative discourse. The Church’s outlook, in other words, was international, or “cosmopolitan.”

Joseph A. Schumpeter, in his History of Economic Analysis (1954), highlighted some of the consequences of this cosmopolitan quality to the Church:

All those monks and friars spoke the same unclassical Latin; they heard the same Mass wherever they went; they were formed by an education that was the same in all countries; they professed the same system of fundamental beliefs; and they all acknowledged the supreme authority of the Pope, which was essentially international: their country was Christendom, and their state was the Church.

National divisions did not mean to them [the Church’s representatives] what they came to mean in the sixteenth century [with the rise of the modern nation-state]; nothing in the whole range of Dante’s political ideas is so striking as is the complete absence of the nationalist angle.

The result was the emergence of an essentially international civilization and an international republic of scholars that was no phrase but a living reality. St. Thomas was an Italian and John Duns Soctus was a Scotsman, but both taught in Paris and Cologne without encountering any of the difficulties that they would have encountered in the age of airplanes.

The significance of the Church’s authority in temporal affairs can be appreciated in terms of the famous edict of 1041, the Truce of God. The wars between the nobilities and the kings and princes had become so fierce and disruptive of social and economic life that the Church declared Thursday through Sunday as days of devotion and prayer, during which the fighting of battles and the shedding of blood were declared to be “sins” against the Church.

As a consequence, war diminished or ceased for a period of time through large parts of Europe. The cost of maintaining, paying, feeding, and housing sizable armies of mercenaries who could fight only three days a week – Monday, Tuesday, and Wednesday – was often too great a financial burden for the lords, noblemen, and princes in whose service those professional soldiers were employed.

However, while this partly succeeded in reducing or stopping fighting among many of the Medieval Knights and their soldiers, the “sinfulness” of such violence was only when it was Christian against Christian; the prohibition did not restrict violence against non-Christians.  Thus, aggression and violent acts against non-Christians – Jews, heretics, and Muslims – were still considered “moral” acts since they were against the “enemies” of the Church and the Christian faith.

What Separated the Church from the Ancient World 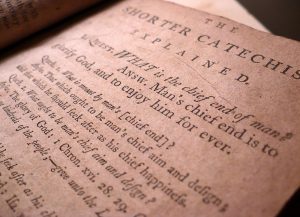 The first page from the 9th edition of the Westminster Shorter Catechism (1785) / Photo by Alekjds, Wikimedia Commons

The Catholic Church also had a set of fundamental beliefs and principles that set it apart from the Greek and Roman views that had preceded it, and which were to have importance in the future in terms of their economic impact.

First, Christianity proclaimed that all men are the creatures of God, and equal in His eyes. Any inequalities recognized as existing between men should be seen as only the “natural” inequalities that one finds between brothers.

Second, the Church condemned slavery. For one man to hold another in bondage was to make some men gods over others, which was counter to the Christian doctrine that there is only one Lord and Master over all men, and He resides in Heaven. That the Church notoriously acquiesced to or actively condoned slavery at various times did not change the fact that the underlying principle against slavery worked as an acid eating away as the expedient rationales or justifications used in its defense.

Third, the Church declared that work and labor has dignity, and is not the mark of an inferior or a slave. With the expulsion of Adam and Eve from the Garden of Eden, work was declared to be man’s “curse” for having disobeyed God’s laws; but honest labor was also an avenue for man’s salvation for the glory of God.

Fourth, Charity and alms-giving were among the cardinal virtues. But charity and alms-giving were proscribed among the “good works” that men could do in God’s name in the context of two limitations: only the truly and deserving needy should be recipients of such gifts, and the giving should be in proportion to the giver’s ability to perform good works.

However, the positive aspects of these influences should not cloud the eventual tensions between Church doctrine and what emerged as the Age of Reason in the seventeenth and eighteenth centuries. This was concisely summed up by French social philosopher, Louis Rougier, in The Genius of the West (1971):

The whole hierarchy of values of the Greco-Roman world was turned upside down. Faith was more important than knowledge … For the Fathers of the Church, for the doctors of the Middle Ages, and the great preachers … the passion for knowledge – libido sciendi – which Plato and Aristotle had regarded as the supreme accomplishments of human life, was considered as damning as the other passions …

Throughout the Middle Ages and into modern times, this attitude, this ama necscire (love of ignorance) would persist. Even Pascal, after his conversion, would reproach Descarte and Copernicus for delving too deeply into sciences that even were they true, would not be “worth one hour of pain.”

If Christianity had limited itself to discouraging scientific research as useless diversion (to use the language of Pascal) it would have been bad enough; but it went much further than that. It undertook to stop such research as a threat to faith. Once the canon of Holy Scripture and the ecclesiastical hierarchy had been established, the hierarchy demanded that it alone be the interpreter of religious meaning.