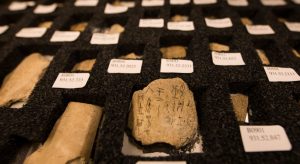 These “oracle bone” fragments, some of which show an ancient Chinese script, are housed at the Royal Ontario Museum in Toronto. The pieces here are just a tiny fraction of the many thousands discovered thus far at a single site in China.Xinhua/Alamy Photos

The bones of 3,000-year-old sacrificial victims in China are revealing unexpected new twists.

There is a legend in China of a 19th-century barber named Li Cheng who lived in Xiaotun, a small village close to what is now the city of Anyang, about 500 kilometers south of Beijing. Li, the story goes, was plagued by a horrifying skin condition, his body covered in open sores. One day, he chanced upon some ancient bone fragments with weird figures incised on them. Desperate for a cure, Li believed these to be ancient “dragon bones”—a key medicinal ingredient, according to an old wives’ tale. He ground the bones up and smeared the powder all over his sores. Miraculously, the legend goes, they healed. After that, he went from door to door, selling ground up “dragon bones” as a remedy for various ailments.

Whether or not this tale is true, one thing is certain: Bones like these became popular in the 1800s for their purported healing powers. One day in 1899, Wang Yirong, a famous scholar of ancient scriptures, noticed that a bone fragment floating in his herbal soup had some interesting scribbles on it. Upon careful inspection, Wang suspected that the markings were an archaic hieroglyphic inscription, probably older than the then-oldest form of Chinese writing found on bronze vessels from the Western Zhou dynasty (1046–771 B.C.). He was right. Floating in his soup was the earliest writing ever found in East Asia.

Wang’s discovery immediately prompted an investigation into the source of these inscribed bones. Archaeologists soon realized that these texts were records of divinations from the late Shang dynasty (circa 1250–1046 B.C.), about 3,000 years ago: Prayers would be written on a piece of bone, usually from a turtle or cow, and then burned to see how the bone cracked. Through these so-called “oracle bones” we have learned of the many concerns of the Shang kings: from wishing away an agonizing toothache to hoping to win a battle. So far, over 150,000 pieces of oracle bones have been discovered around modern-day Xiaotun, as have cemeteries, sacrificial pits, temples, palaces, and more. After decades of such discoveries, researchers determined that these are the ruins of the last capital of the Shang dynasty, Yinxu, which was named a UNESCO World Heritage site in 2006.

Ifirst visited Yinxu as a Ph.D. student in the summer of 2012. It was a sweltering day, and I was jetlagged and a little sick, but discomfort soon gave way to wonder. Most of Xiaotun village has been converted into a museum, and standing in front of the towering entrance gate, I realized that I had arrived at ground zero of Chinese writing—the beginning of recorded Chinese history. 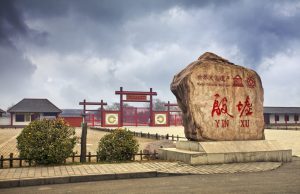 At the entrance to the Yinxu Museum, in Anyang, China, the red gate was built in the shape of the word “door” in ancient Chinese script.Mu jun/Associated Press

Much like the epigraphists who study the inscriptions on oracle bones, I work to extract stories and information from bones. But I mostly work with human remains. My specialty is bioarchaeology—I study the isotopic ratios of various elements within human bones and teeth in order to reconstruct what a person’s life was like. To do this, I take a small chunk of ancient bone (about half a gram—the size of the tip of a finger), grind it up, and slow-cook it in weak acid until it turns into gelatin. While oracle bones tell us only what the ruling families during the Shang dynasty wished for, the human bones that I study show us the life histories of the lowly, everyday people.

Yinxu is a city of endless splendors and horrors. The site’s royal cemetery has yielded some of the world’s most exquisite bronze and jade artifacts. It also holds evidence of massive sacrificial ceremonies, where often 50, or even up to 300, human victims were killed at a time as ritual offerings to various gods and ancestors. It is estimated that during the roughly 200 years that Yinxu was occupied, over 13,000 humans, and many more animals, were sacrificed.

According to oracle inscriptions, many of the young men killed in the Yinxu sacrifices were war captives from the “Qiang,” a name given to a group or groups of “barbaric” pastoralists living to the west of Yinxu. But, since the majority of these sacrificial victims were not buried with any personal items, it has been hard to confirm this narrative with physical evidence.

In archaeology, the most common method used to determine where people lived and if they moved during their lifetime is to look at the strontium isotope ratios in their teeth. Strontium varies from place to place because of differing geologies; this variation is absorbed from the soil into water and plants, passes along the food chain, and goes into human teeth as they form, leaving a record of where someone lived in childhood. However, the ritual practices performed in Yinxu (as recorded in oracle bones) often involved decapitation (and other forms of mutilation). As a result, many of the sacrificial victims in Yinxu were buried headless, making it impossible to look at their teeth. And the strontium in bones tends to get muddled up with the strontium in the soil they were buried in, making it hard to decipher the person’s life history.

That is why I decided to look at carbon, nitrogen, and sulfur isotopes in the bones—elements that are usually used to reconstruct someone’s diet rather than where they lived. Carbon isotope ratios can indicate, for example, whether someone was eating mostly fish, meat, or various kinds of crops for their protein. Nitrogen isotopes can reveal someone’s trophic position—that is, whether they were eating more food from the top of the food chain (such as meat) or from the bottom (plants). Sulfur isotope ratios, like strontium, are mostly determined by geology, helping to unpick where peoples’ food came from—though sulfur is often a tricky element to measure. Unlike teeth, bones are constantly remade throughout one’s lifetime: Small bones can show someone’s diet over the last few years of life, and bigger bones contain a record of several decades. 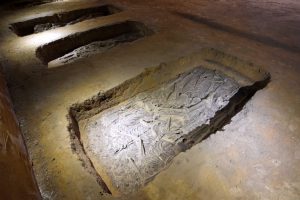 These are just a few of the several thousand pits at Yinxu in which the Shang kings made sacrificial offerings. Xinhua/Li Bo/Alamy Photos

My analysis confirmed that, as expected, the sacrificial victims weren’t locals—their long-term isotopic signatures were different from the short-term signatures, meaning they had probably moved from somewhere else. Also, the results revealed that when the victims were living in Yinxu, they were being fed a mostly vegetarian diet. And this plant-based diet must have persisted for at least a few years—long enough for the changes to be registered in the new bone growth.

Many archaeologists who study the Shang dynasty believe that war captives during that period had more sacrificial value than laborers or slaves. By that logic, war captives would have been killed soon after capture to avoid the depreciation of their “sacrificial currency.” But the results of my work throw the spotlight on a different theory: Since they were kept in Yinxu for a few years before being killed and were fed a diet consisting of very little animal protein, it is possible that these war captives were used as slaves.

These results have shaken up theories about the lives of Yinxu’s sacrificial victims, and also about what isotopes can tell us—it’s unconventional to look at a combination of carbon, nitrogen, and sulfur isotopes to figure out where and when people moved during their lives, but in this case it worked well.

Like many scientific inquiries, however, my research has generated more questions than answers. We don’t have direct evidence of whether war captives at Yinxu were put to work or not, or even if these individuals were war captives at all. But uncertainty is not necessarily a bad thing. It just shows that the truth is often complicated, and that there is much more work to do.