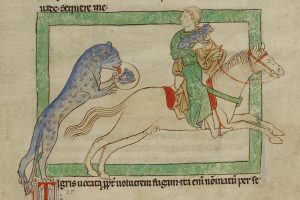 In medieval books of beasts, the tiger was often depicted in surprisingly colorful ways—including bright blue.

A tiger is orange, black, and white, but the artist of this image does not seem to think so. He has painted this cat, found in the thirteenth-century Northumberland Bestiary, a light blue. He achieves this cerulean tone through the process of color washing, applying tones of pigment to parchment to create in a light gradation.

The variation of tones gives the tiger a sense of dimension, while the ink outline delineates its majestic form. The entire image is drawn in a vibrant green cartouche (ornamental frame), and the hunter’s robe is painted in a similar mossy color. His horse’s saddle and reins are a lively red, the same color used for manuscript rubrications in medieval Europe.

Still, the mystery remains: why is this tiger blue?

One possible explanation is that the artist had the freedom to paint it so. In fact, the tiger is one of just a few animals in the medieval bestiary without explicit biblical references or Christological parallels. Other beasts are equated with virtues (such as the bee), biblical allegories (such as the whale), and even Christ himself (such as the panther). In depicting these animals, medieval artists usually stuck to established narratives. Doing so, after all, showed their pious reverence for tradition and the word of the Lord. The story of the tiger, however, does not have any particular ties to scripture.

In the first century A.D., Roman philosopher Pliny wrote his famous Natural History. His proto-scientific text contains tales of the tiger and other beasts of the earth. The tiger’s tale revolves around a hunter who attempts to steal a mother’s cub. According to Pliny, the hunter takes many cubs and flees on his horse with the aim of only keeping one, dropping others behind him to distract the mother as he gets away. Later in history this story was translated from Latin into other languages, such as French and English. 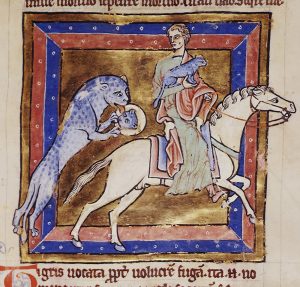 Over time, and with each successive translation, the mythic tale of the beast naturally changed. In the thirteenth century, the Franciscan Monk Bartholomaeus Anglicus added another element to the story: a mirror. According to his addition, the hunter drops a shiny circular object behind him in order to distract the mother. The tiger stops her pursuit and looks into the mirror; as her reflection looks back, she is tricked into thinking it is her cub. She licks the mirror as if to tend to her infant, and the hunter is able to flee the scene. This is the tale depicted in essentially all subsequent medieval bestiaries.

The Rise of Science

New scientific ideas came to the forefront in twelfth- and thirteenth-century Christian Europe, introduced through texts from Arabic and ancient classical authors such as Plato, Aristotle, and natural philosophers. Philosophers and scientists stressed the importance of observation and viewing things directly in nature. But during the Middle Ages, knowledge of foreign beasts—such as the tiger—remained scant. The rare sighting of a tiger in Europe usually took the form of a king’s royal procession, in which a ruler showed off exotic animals to illustrate of his power. Viewings of these processions were usually limited to upper-class society, and artists did not always have first-hand accounts of the creatures.

Confusion about the actual appearance of non-European animals such as the tiger thus persisted, giving artists free rein to invent their own interpretations. They depicted not only blue tigers, but also hybrid creatures and fantastic monsters. And color was a primary vehicle through which bestiary artists demonstrated inventiveness and creativity and personalized their creations.

It would not be until much later that artists became more interested in more naturalistic depictions of tigers and other beasts. But as we see in the bestiary, medieval artists were decidedly not aiming for realism.