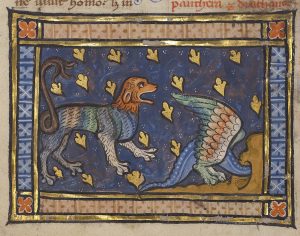 A Dragon Flying over a Panther (detail) in a bestiary, about 1270, possibly made in Thérouanne, France. Tempera colors, gold leaf, and ink on parchment, 7 1/2 × 5 5/8 in. The J. Paul Getty Museum, Ms. Ludwig XV 3, fol. 88. Digital image courtesy of the Getty’s Open Content Program

Despite sharing pages with griffins, dragons, and unicorns, the panther is the holiest of them all. 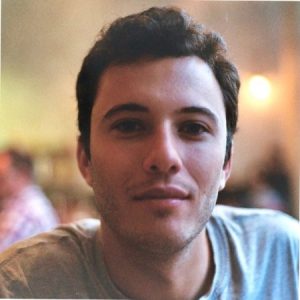 Have you ever seen a panther? In the Serengeti, they are golden yellow. In South Africa lives the rare “strawberry” panther. In the mountain ranges of Central and South Asia, the elusive bleach-white panther can disappear into the backdrop of snow-covered mountains. Scattered amongst the rainbow of leopards in Asia and Africa, it is also possible to spot a black panther. If you lived in medieval Europe, where no panthers dwelled, your likeliest source of knowledge about such a creature would have been a bestiary.

How was the panther illustrated in such books? Across hundreds of bestiary manuscripts, we see panthers with polychromatic coats: sometimes spotted, sometimes striped in colors of red, green, and blue. This eclectic approach might seem to have a zoological explanation, as a way to combine the known and imagined colors of the panther—but theology is the true cause.

It was said that when the panther has feasted and filled itself to its heart’s content, it hides away in its den and goes to bed. After three days, the beast rises from its slumber, and, naturally, lets out a loud belch. From this, a sweet smell of allspice is released that attracts every being in the animal kingdom except the dragon. The dragon hides from the panther, fearful of its existence and deterred by the sweet breath. 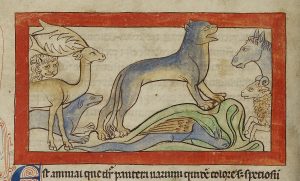 A Panther (detail) in the Northumberland Bestiary, about 1250–60, unknown illuminator, made in England. Pen-and-ink drawings tinted with body color and translucent washes on parchment, 8 1/4 x 6 3/16 in. The J. Paul Getty Museum, Ms. 100, fol. 16v. Digital image courtesy of the Getty’s Open Content Program

A Feline Symbol for Christ

In nearly every entry of a bestiary, real and mythological beings are connected to Christian messages. The panther, too, embodies the predominant religion of medieval Europe. Like other animals in the bestiary, such as the tiger, stag, and pelican, the panther is a symbol for Christ.

How do we know this? The three clues are the length of time the panther sleeps, its sweet breath, and its multicolored coat:

The medieval bestiary transforms the panther into a symbol of Christ, with the rainbowed illustrations of the animal reflecting his wisdom and holiness. As the embodiment of Christ, the panther is able to bring complete harmony and unity to the animal kingdom while also providing protection from evil. This parallels medieval politics, as medieval Christianity asserted its claim as a religion capable of bringing stability and tranquility to the European and African continents.

In the twentieth and twenty-first centuries, the panther has reemerged as a symbol of leadership and unity. In comics, civil rights activism, and, now, cinema, the feline has become synonymous with equality and strength. The powers of guidance and protection given to the panther in medieval bestiaries are still seen today—simply without direct religious implications. 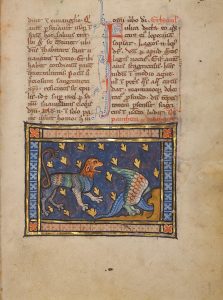 A Dragon Flying over a Panther in a bestiary, about 1270, possibly made in Thérouanne, France. Tempera colors, gold leaf, and ink on parchment, 7 1/2 × 5 5/8 in. The J. Paul Getty Museum, Ms. Ludwig XV 3, fol. 88. Digital image courtesy of the Getty’s Open Content Program