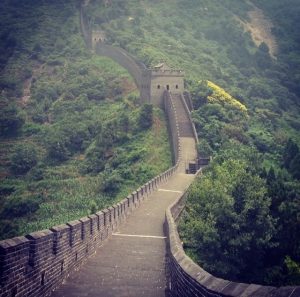 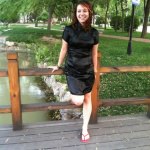 The Great Wall of China is a barrier fortification in northern China running west-to-east 13,171 miles (21,196 km) from the Jiayuguan Pass (in the west) to the Hushan Mountains in Liaoning Province in the east, ending at the Bohai Gulf. It crosses eleven provinces/municipalities (or ten, according to some authorities) and two autonomous regions (Inner Mongolia and Ningxia). Construction of the wallbegan in the Qin Dynasty (221-206 BCE) under the First Emperor Shi Huangdi and continued over hundreds of years throughout many different dynasties. The Great Wall in the present day is almost completely the work of the Ming Dynasty (1368-1664 CE) who added the distinctive watchtowers and expanded the length and width of the wall. The now-famous national monument fell into decay following the Ming Dynasty, when the Qing Dynasty (1644-1912 CE) took power and expanded the border of China northwards, making the wall obsolete. Restoration and preservation efforts only seriously began in the 1980’s CE, and the wall was declared a UNESCO World Heritage Site in 1987 CE.

During the time known as The Warring States Period (476-221 BCE), the different regions of China fought for control of the country during the collapse of the Eastern Zhou Dynasty (771-226 BCE). One state emerged victorious from this struggle: the state of Qin which is pronounced ‘chin’ and gives China its name. The general who led Qin to victory was Prince Ying Zheng who took the name `Qin Shi Huangdi’ (First Emperor) after conquering the other states.

Shi Huangdi ordered construction of the Great Wall to consolidate his empire. The seven warring states each had walls along their border for defense, which Shi Huangdi destroyed after he took power. As a sign that all of China was now one, the emperor decreed a great wall would be built along the northern border to defend against the mounted warriors of the nomadic Xiongnu of Mongolia; there would be no more walls marking boundaries between separate states in China because there would no longer be any separate states. His wall ran along a line further to the north than the present one, marking what was then the border between China and the Mongolian plains. The wall was constructed by unwilling conscripts and convicts who were sent north under guard from all over China for the purpose. Shi Huangdi was not a benevolent ruler and was more interested in his own grandeur than the good of his people. His wall was not regarded by the Chinese people under the Qin Dynasty as a symbol of national pride or unity but as a place where people were sent to labor for the emperor until they died.

The present wall, whose image is so well known, is not Shi Huangdi’s wall from c. 221 BCE. There is actually very little of the original wall left today. When the Qin Dynasty fell in 206 BCE, the country split into the civil war known as the Chou-Han Contention, fought between the generals Xiang-Yu of Chou and Liu-Bang of Han, the two leaders who had emerged as the most powerful of those who had helped topple the Qin Dynasty. When Liu-Bang defeated Xiang-Yu in 202 BCE at the Battle of Gaixia, he became the First Emperor of the Han Dynasty and continued construction of the wall as a means of defense. He was also the first emperor to use the wall as a means of regulating trade along the Silk Routes (better known as The Silk Road) from Europe to China. 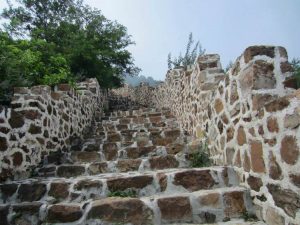 The following dynasties all made their own contributions and repairs to the wall until the Ming Dynasty (1368-1664 CE) initiated a massive building project to protect the country from invading nomads from Mongolia, the very same incentive that had played a part in Shi Huangdi’s original vision. This similarity in purpose may explain the belief that the present wall dates from the Qin Dynasty. The Ming built the wall featuring over 25,000 massive watchtowers and ranging in height from 16-26 feet (5-8 meters), 20 feet across the bottom (6 meters) and 16 feet across the top (5 meters).

In addition to creating the massive wall, the Ming Dynasty also enclosed their most important agricultural center, Liaoning Province, behind a walled fortification known as the Liaoning Wall (also known as the Liaodong Wall). This wall has been a source of controversy between China and North Korea since 2009 CE when the Chinese government claimed they had only recently discovered portions of the Great Wall close to the border with North Korea by the Hushan Mountains. North Korea has asserted that the ‘newly discovered Great Wall’ actually belongs to them and is not part of China’s Great Wall. The section of wall in dispute is no doubt part of the Liaoning Wall. This wall in no way can be compared with the Great Wall and was never built to be. It was a simple defensive barrier constructed to hamper invasions of Liaoning from the north and was constructed of earth, stone, and whatever else was available. Moats were dug on either side of the wall to further impede an invading force.

As it turned out, the Liaoning Wall and the Great Wall were equally useless in repelling invasion. Manchu invasions from the north began in c. 1600 CE and continued until 1644 CE when the Great Wall was opened to the invaders. China was again in turmoil at this time as a rebellion had been mounted against the Ming Dynasty. The Ming general Wu Sangui (1612-1678 CE), who had declared himself emperor, opened the Great Wall to the Manchus in a deal whereby they would help him defeat the rebels. Instead, the Manchus seized power, expelled the Ming Dynasty, and established the Qing Dynasty (1644-1912 CE). The victory of the Manchus over the Ming meant that the border of China was now some distance north of the Great Wall, and since it was no longer of any use in defense, it was neglected and fell into ruin until the rise of the Republic of China in 1912 CE, when it was found useful in controlling immigration and emigration.

There were efforts over the years to maintain the structure, but no concerted effort existed until as recently as 1980 CE when the wall was made a priority of the Chinese government as a tourist attraction and source of revenue. It was not designated a UNESCO World Heritage Site until 1987 CE, but even with that designation the wall is slowly crumbling. Today, according to historians and preservationists who monitor the site, there are only about 600 miles (372 km) of the wall left in stable condition.

There are many modern misconceptions concerning the Great Wall of China. The best known and most often repeated is that it is the only human-made structure on earth that can be seen from space; this is not true. The origin of this claim is the English essayist Sir Henry Norman, who wrote in 1895 that the wall was “the only work of human hands on the globe visible from the moon.” His observation was based on the fact that people on earth could see craters and canals on the moon, and so someone on the moon would be able to see something as long and massive as the Great Wall on earth. Many people seem to believe that the claim the wall can be seen from the moon is based on first-hand accounts of astronauts or the work of scientists and astronomers, but it is actually the creation of a man who wrote when space travel was not even possible. Modern day scholars and scientists, as well as those who have traveled to the moon, have debunked this claim repeatedly.

Other fallacies concerning the wall are that it was one of the Seven Wonders of the Ancient World, that it dates from the Qin Dynasty in 221 BCE, and that it was built as a symbol of national pride. The last two claims, as seen above, are clearly false, as is the first; the Seven Wonders of the Ancient World were all located in the Mediterranean region of Greece, Egypt, and Turkey. The Great Wall is, however, among those chosen as one of the modern Seven Wonders of the World by the New 7 Wonders Foundation in 2007 CE. The Great Wall is visited by over four million people a year, and even though it cannot be seen from the moon, is among the most recognizable human-made structures in the world.