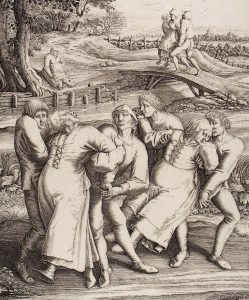 Detail from a 1642 engraving by Hendrik Hondius, based on Peter Breughel’s 1564 drawing depicting sufferers of a dance epidemic occurring in Molenbeek that year — Wikimedia Commons

500 years ago this month, a strange mania seized the city of Strasbourg. Citizens by the hundreds became compelled to dance, seemingly for no reason — jigging trance-like for days, until unconsciousness or, in some cases, death. Ned Pennant-Rea on one of history’s most bizarre events. 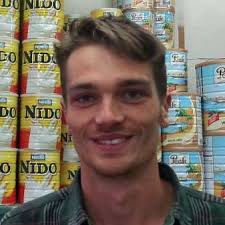 This article, The Dancing Plague of 1518, was originally published in The Public Domain Review under a Creative Commons Attribution-ShareAlike 3.0. If you wish to reuse it please see: https://publicdomainreview.org/legal/

On a hastily built stage before the busy horse market of Strasbourg, scores of people dance to pipes, drums, and horns. The July sun beats down upon them as they hop from leg to leg, spin in circles and whoop loudly. From a distance they might be carnival revellers. But closer inspection reveals a more disquieting scene. Their arms are flailing and their bodies are convulsing spasmodically. Ragged clothes and pinched faces are saturated in sweat. Their eyes are glassy, distant. Blood seeps from swollen feet into leather boots and wooden clogs. These are not revellers but “choreomaniacs”, entirely possessed by the mania of the dance.

In full view of the public, this is the apogee of the choreomania that tormented Strasbourg for a midsummer month in 1518. Also known as the “dancing plague”, it was the most fatal and best documented of the more than ten such contagions which had broken out along the Rhine and Moselle rivers since 1374. Numerous accounts of the bizarre events that unfolded that summer can be found scattered across various contemporary documents and chronicles compiled in the subsequent decades and centuries. One seventeenth-century chronicle by the Strasbourg jurist Johann Schilter quotes a now lost manuscript poem:

Many hundreds in Strassburg began
To dance and hop, women and men,
In the public market, in alleys and streets,
Day and night; and many of them ate nothing
Until at last the sickness left them.
This affliction was called St Vitus’ dance.1

Another chronicle from 1636 relates a less happy ending:

In the year 1518 AD … there occurred among men a remarkable and terrible disease called St Vitus’ dance, in which men in their madness began to dance day and night until finally they fell down unconscious and succumbed to death.2

The physician and alchemist Paracelsus visited Strasbourg eight years after the plague and became fascinated by its causes. According to his Opus Paramirum, and various chronicles agree, it all started with one woman. Frau Troffea had started dancing on July 14th on the narrow cobbled street outside her half-timbered home. As far as we can tell she had no musical accompaniment but simply “began to dance”.3 Ignoring her husband’s pleas to cease, she continued for hours, until the sky turned black and she collapsed in a twitching heap of exhaustion. The next morning she was up again on her swollen feet and dancing before thirst and hunger could register. By the third day, people of a great and growing variety — hawkers, porters, beggars, pilgrims, priests, nuns — were drinking in the ungodly spectacle. The mania possessed Frau Troffea for between four and six days, at which point the frightened authorities intervened by sending her in a wagon thirty miles away to Saverne. There she might be cured at the shrine of Vitus, the saint who it was believed had cursed her. But some of those who had witnessed her strange performance had begun to mimic her, and within days more than thirty choreomaniacs were in motion, some so monomaniacally that only death would have the power to intervene. 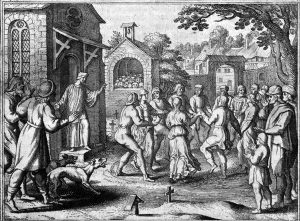 German engraving of hysterical dancing in a churchyard, ca. 17th century. Note the severed arm brandished by man on the left of the circle — Wikimedia Commons

The more citizens this unusual plague afflicted, the more desperate the privy council became to control it. The clergy held it to be the work of a vengeful Saint Vitus, but the councillors listened instead to the guild of physicians, declaring the dance to be “a natural disease, which comes from overheated blood.”4 According to humoral theory, the afflicted must therefore be bled. But the physicians instead recommended the treatment given to past victims of this bizarre disease. They must dance themselves free of it. A sixteenth-century chronicle composed by the architect Daniel Specklin records what the council did next.5 Carpenters and tanners were ordered to transform their guild halls into temporary dance floors, and “set up platforms in the horse market and in the grain market“ in full view of the public. To keep the accursed in motion and so expedite their recovery, dozens of musicians were paid to play drums, fiddles, pipes, and horns, with healthy dancers brought in for further encouragement. The authorities hoped to create the optimal conditions for the dance to exhaust itself.

It backfired horribly. Being more inclined to a supernatural than a medical explanation of the dance, most of the onlookers saw in the frenzied movements a demonstration of the magnitude of Saint Vitus’ fury. None being free of sin, many were lured into the mania. The Imlin family chronicle records that within a month the plague had seized four hundred citizens.6 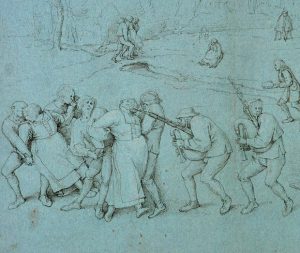 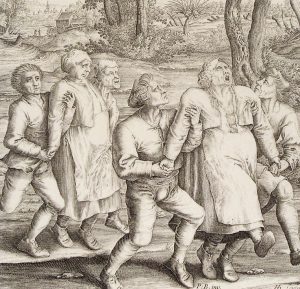 The privy council ordered the stages to be pulled down. If the choreomaniacs must continue their disturbing movements then they now must do so out of sight. The council went further, prohibiting almost all dance and music in the city until September. This was no small thing for a culture in which communal dancing was central — from upright burghers performing their restrained, delicate steps in the so-called bassadanza, to ale-laden peasants leaping with hearty abandon to let off steam.7 Sebastian Brant, a Strasbourg chancellor and author of The Ship of Fools (1494), detailed the exception to the ban: “if honourable persons wish to dance at weddings or celebrations of first Mass in their houses, they may do so using stringed instruments, but they are on their conscience not to use tambourines and drums.”8 Presumably strings were deemed less likely than percussion to bring on the mania.

In addition, the council ordered those worst afflicted to be bundled into wagons and taken the three-day ride to the shrine of Saint Vitus, where Frau Troffea had been cured. Priests placed the choreomaniacs, who were, presumably, still thrashing about like landed fish, underneath a wooden carving of Vitus. They put small crosses in their hands and red shoes on their feet. On the soles and tops of these shoes, they sprinkled holy water and painted crosses of consecrated oil.9 This ritual, carried out in an atmosphere thick with incense and Latin incantations, had the desired effect. Word soon reached Strasbourg and more were sent to Saverne to be forgiven by Vitus. Within a week or so the stream of suffering pilgrims had diminished to a trickle. The dancing plague had lasted for over a month, from mid-July to late August or early September. At its height, as many as fifteen people were dying each day. The final toll is unknown but, if such a daily death rate was true, could have been into the hundreds.

If not an angry saint or overheated blood then what did cause the dancing plague? In the view of Paracelsus, Fra Troffea’s marathon jig was a ploy to embarrass Herr Troffea: “In order to make the deception as perfect as possible, and really give the impression of illness, she hopped and sang, which was all most distasteful to her husband.”10 Upon seeing the success of the trick, other women began dancing to annoy their husbands too, powered on by “free, lewd and impertinent” thoughts. This type of dancing mania was classified by Paracelsus as Chorea lasciva (caused by voluptuous desires, “without fear or respect”), which sat alongside Chorea imaginativa (caused by the imagination, “from rage and swearing”), and Chrorea naturalis (a much milder form, caused by corporal causes) as the three main forms of the condition.11 While the famously iconoclastic Paracelsus does deserve credit for placing the cause of the disease in the minds of the choreomaniacs rather than in heaven, he was also a misogynist whose diagnosis looks somewhat ridiculous now. 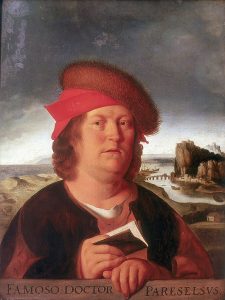 Several modern historians have argued that the dancing plagues of mediaeval Europe were caused by ergot, a mind-altering mould found on the stalks of damp rye, which can cause twitching, jerking, and hallucinations — a condition known as St Anthony’s Fire. However, the historian John Waller has debunked the ergot hypothesis in his brilliant book on the dancing plague, A Time to Dance, a Time to Die (2009). Yes, ergot can cause convulsions and hallucinations, but it also restricts blood flow to the extremities. Someone poisoned by it simply could not dance for several days in a row.

Waller’s explanation of the dancing plague emerges from his deep knowledge of the material, cultural, and spiritual environment of sixteenth-century Strasbourg. He opens his book with a quote from H. C. Erik Midelfort’s A History of Madness in Sixteenth-Century Germany (1999):

Madnesses of the past are not petrified entities that can be plucked unchanged from their niches and placed under our modern microscopes. They appear, perhaps, more like jellyfish that collapse and dry up when they are removed from the ambient sea water.12

According to Waller, the Strasbourg poor were primed for an epidemic of hysterical dancing. First of all, there was precedent. Every European dancing plague between 1374 and 1518 had occurred near Strasbourg, along the western edge of the Holy Roman Empire. Then there were the prevailing conditions. In 1518, a string of bad harvests, political instability, and the arrival of syphilis had induced anguish extreme even by early modern standards. This suffering manifested as hysterical dancing because the citizens believed it could. People can be extraordinarily suggestible and a firm conviction in the vengefulness of Saint Vitus was enough for it to be visited upon them. “The minds of the choreomaniacs were drawn inwards,” writes Waller, “tossed about on the violent seas of their deepest fears.”13 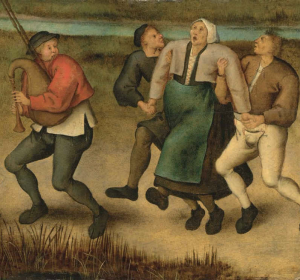 One way to elucidate the dancing plague is to consider the trance states people reach today. In cultures around the world, including in Brazil, Madagascar, and Kenya, people enter trances deliberately during ceremonies or involuntarily during periods of extreme stress. Once entranced, their perception of pain and exhaustion is marginalised. Waller describes the spread of the dancing plague as an example of psychic contagion, and he draws a parallel with the laughing epidemic that engulfed a region of Tanganyika (modern-day Tanzania) in the fraught postcolonial year of 1963. When a couple of girls at a local mission school got the giggles, their friends followed suit until two-thirds of the pupils were laughing and crying uncontrollably and the whole school had to be shut down. Once home, the pupils “infected” their families and soon whole villages were consumed by hysterics. Doctors recorded several hundred cases, lasting a week on average.

Of course, the dancing plagues have another parallel — modern rave culture. Though usually without the bloody feet and pleas for mercy of our sixteenth-century choreomaniacs, and often with a little chemical help, it is not uncommon for partygoers to dance for days with little break, forgoing sleep and food, sometimes shifting their feet with poise and balance, and sometimes leaping with none. Should one such reveller — perhaps fuelled by a particularly potent dancefloor potion — be transplanted onto the horse market stage of early modern Strasbourg half a millennium ago, they might not feel entirely out of place.