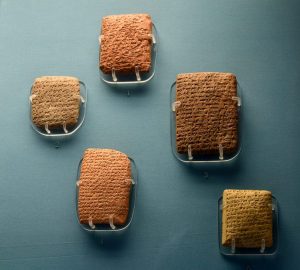 These clay tablets (letters) were found in the ruins of Akhenaten’s capital, Tell el-Amarna, Egypt. They were inscribed with Babylonian cuneiform inscriptions, not hieroglyphs. The letters represent the diplomatic correspondence sent by various vassal princes of the Egyptian Empire to the pharaoh Amenhotep III, Akhenaten, and Tutankhamun. They document a turbulent period when Egypt’s preoccupation with domestic policy led to insurrection and instability throughout the Empire. The Amarna letters make reference to the Hapiru, depicted as roving bands of stateless people, based in the hill country, and conducting raids on cities. These “alternative Canaanites” formed the basis of the Biblical Hebrews. 14th century BCE. From Tell el-Amarna, Egypt. (The British Museum, London). / Photo by Osama Shukir Muhammed Amin, Creative Commons

Even though the simpler form of communication between states already existed, it was the Amarna diplomatic system that expanded relationships throughout the Near East. 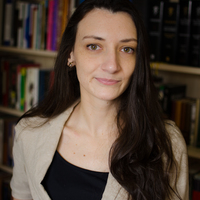 The Amarna Letters are a body of 14th century BCE correspondence exchanged between the rulers of the Ancient Near East and Egypt. They are perhaps the earliest examples of international diplomacy while their most common subjects are negotiations of diplomatic marriage, friendship statements and exchanged materials. The name “Amarna Letters” derives from the place where the tablets were found: the ancient city of Akhetaten (built by order of the Pharaoh Akhenaten), but nowadays known as Tell el-Amarna, in Egypt.

The first letters were found in 1887 CE and date back to the 14th century BCE. They are the first international diplomatic system known to us, i.e. they contain rules, conventions and institutions responsible for communication and negotiation. Although in the early third millennium BCE there was already another form of relationship, this was merely straightforward written communication between Mesopotamia and Syria. With time, this form added some rules, based on necessity and developed the beginning of diplomatic mechanisms, which would culminate in the Amarna system. Thus, diplomacy was created to be used as a tool in the process of creating an empire.

Even though the simpler form of communication between states already existed, it was the Amarna diplomatic system that expanded relationships throughout the Near East, establishing terms of equality among the Great Powers (Babylon, Hatti, Egypt, Mitanni, Assyria) for the first time. The Amarna Letters show us that great kings from the ancient world had both responsibilities and privileges which were held with power and respect. Therefore, the Amarna system brought a notion of stability and peace, although not always real, for more than two centuries. 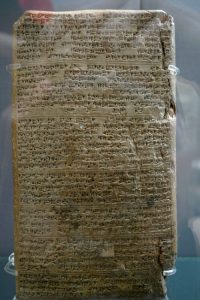 Cuneiform tablet inscribed with a letter from Tushratta, king of Mitanni, to Amenhotep III of Egypt. It was found in Tell el-Amarna and dates from c. 1350 BC, when the city was known as Akhetaten. In this letter, the kings were negotiating a diplomatic mariage between Amenhotep III and a Mitanian princess. Tushratta asks for much gold as a bride-price. (The British Museum, London) / Photo by Priscila Scoville, Creative Commons

The tablets cover the reigns of the rulers Amenhotep III, Akhenaten and possibly Smenkhkare or Tutankhamun, of the 18th dynasty of Egypt. Nonetheless, the system continued to be used for approximately a hundred years after the end of the Amarna Period.

The researchers R. Cohen and R. Westbrook tell us the importance of studying the Amarna Letters. They say that people nowadays should pay more attention to them, as these tablets are the first known diplomatic system. By seeing the mechanisms used in the past, we can learn about different kinds of relationships and how they changed and were modified through time. This means that we can learn more about the contacts between such distant civilizations, acknowledging that isolation was not part of ancient life. By realizing the sophistication of international relations in this period, our way to perceive the distant past can drastically improve.

STRUCTURE OF THE LETTERS

There are 382 known tablets, ordered chronologically and geographically with the acronym “EA”, by J. A. Kunudtzon, in 1907 CE. However, when Knudtzon organized the tablets, in the “Die El-Amarna-Tafeln”, only 358 of them were known, so the other 24 tablets were analyzed in 1970 CE by Anson F. Rainey, with the exception of EA 80-82. 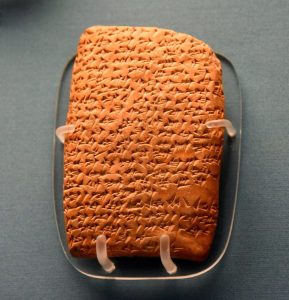 This clay tablet is part of the Amarna letters. This letter was sent from Biridiya (King of Megiddo) to the Egyptian pharaoh Amenhotep III or Akhenaten. Biridiya accuses the King of Acco of treachery by releasing the captured Hapiru leader, Labayu, instead of sending him to Egypt. The letter was written in Babylonian cuneiform inscriptions. 14th century BCE. From Tell el-Amarna, Egypt. (The British Museum, London). / Photo by Osama Shukir Muhammed Amin, Creative Commons

Some of these tablets (32) are not letters, but probably training material for scribes. The letters themselves were organized by Jean Nougayrol in two groups: lettre d’envoi (indicating what is being sent) and lettre d’injonction (making requests). The major part of this correspondence is a combination of these two types, i.e. the letters name gifts sent and ask for something in return.

Most of the letters were received by the Egyptians, only a few of them were written by the Pharaoh. We do not know why these letters were together, but maybe they were never sent or were retained copies. Furthermore, in addition to the letters for training purposes, there are two other subdivisions: the international ones (which the Egyptian rulers exchanged between the Great Powers of the Near East and the independent kingdoms); and the administrative ones (exchanged between the Syrian-Palestine region, mostly Egyptian vassals). 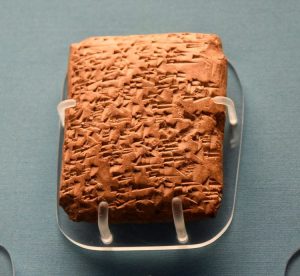 This clay tablet is part of the Amarna letters. This letter was sent from Abdi-Tirshi (King of Hazor) to Amenhotep III or Akhenaten. Abdi-Tirshi reassures the pharaoh that he is loyal and is keeping his cities in good order. The letter was written in Babylonian cuneiform inscriptions; the writing is complex and parts of many signs are indistinct. 14th century BCE. From Tell el-Amarna, Egypt. (The British Museum, London). / Photo by Osama Shukir Muhammed Amin, Creative Commons

The rest of the letter was less stereotypical, making requests or listing the items being sent. But, as we said, normally, they presented both requests and gifts. The most common subjects were negotiations of diplomatic marriage, friendship statements and exchanged materials. 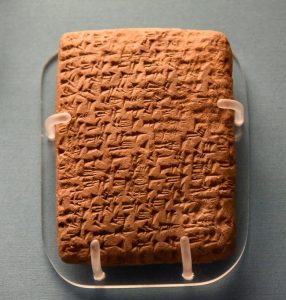 This clay tablet is part of the Amarna letters. This letter was sent from Yapahu, (King of Gezer) to the Egyptian pharaoh Amenhotep III or Akhenaten. Yapahu begs the pharaoh for help in defending his city against rids by the Hapiru (Biblical Hebrews). The letter was written in Babylonian cuneiform inscriptions. 14th century BCE. From Tell el-Amarna, Egypt. (The British Museum, London). / Photo by Osama Shukir Muhammed Amin, Creative Commons

The Egyptian vassals referred to the Pharaoh as “my lord” or “my Sun” and usualy began the letters in a pattern similar to the example below:

Vassals, in theory, must obey their lords and although the Egyptian vassals constantly declared and affirmed loyalty to the Pharaoh some of them were traitors, negotiating with the Hitites, as did Qadesh and Amurru. Others, as Byblos and Damascus, were truly loyal to Egypt, but were everely repressed by the traitors. 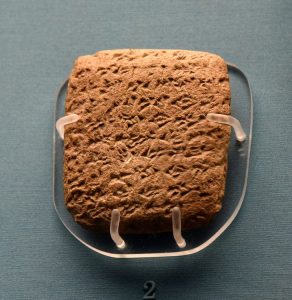 This clay tablet is part of the Amarna letters. This letter was sent from Shipti Ba’al, who reassures the Egyptian pharaoh of his loyalty. The letter was written in Babylonian cuneiform inscriptions. 14th century BCE. From Tell el-Amarna, Egypt. (The British Museum, London). / Photo by Osama Shukir Muhammed Amin, Creative Commons

As noted above, there are 382 tablets known to us, however, they were not found at the same time, which means that different groups of archaeologists and Universities have discovered various portions. Thus, the tablets are nowadays spread all over the world. They can be seen in museums like the Vorderasiatisches Museum (Berlin), the British Museum (London), the Louvre (Paris) and the Egyptian Museum (Cairo).

In 1992 CE, William Moran translated the 350 letters into English for the first time. Thanks to his book, The Amarna Letters, the correspondence can be easily explored by researchers from all over the world, given that, until then, only the version in cuneiform was available. In 2014 CE, a new edition of the letters was published by Anson F. Rainey and edited by William M. Schniedewind and Zipora Cochavi-Rainey. The book, The el-Amarna Correspondence, has translations, cuneiform transcriptions and commentaries on the letters.