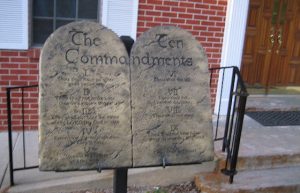 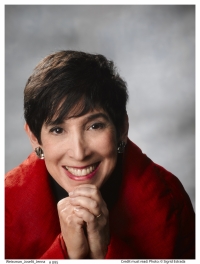 Assemblyman Charles Walters, a Populist politician from Kansas, was in a bit of a tizzy. If the behavior of his fellow Americans was any indication, the Ten Commandments no longer had the power to command. Amid the blandishments of modernity, they were fast losing ground, prompting the male population in particular to do “those things they ought not to do”—and with impunity. “The men of the present generation,” Walters observed in 1897, “have become doubters and scoffers; [they] have strayed from the religion of their fathers … [and] wantonly violate the law given to the world from Mount Sinai.” Not one to sit on his hands, the politician was determined to restore the commandments to their rightful place. But how? His counterparts in New York might invoke the biblical covenant at a rally, seeking to rouse a rowdy crowd to action: “Three cheers for the Ten Commandments,” they would say. “Let’s hear it for the Ten Commandments.” Back in Kansas, though, sloganeering was not enough. The situation called for stronger measures: a bill rather than a bullhorn.

Seeking to put teeth back into the Ten Commandments, Walters proposed a piece of far-reaching legislation that would incorporate each commandment into Kansas law, endowing it with “statutory force.” Were he to prevail, the fifth commandment, for example, would receive a new lease on life as “Section 5” of the Kansas legal code, and the seventh commandment would henceforth be known as “Section 7.” More to the point, perhaps, those guilty of violating Sections 5 and 7, as well as Sections 1 through 4 and 6, 8, 9, and 10, would have to answer to law enforcement personnel, as well as to God or their pastor. If a resident of Kansas City was found guilty of treating his parents badly, he could be fined $500 and face the prospect of six months in jail. If a resident of Topeka committed adultery, his future did not look at all bright: he might have to spend the rest of his days in the state penitentiary.

Something new was in the air, and it was not just the harshness of the penalties that awaited those Kansans who gave the Ten Commandments short shrift. Nor was it the way in which Walters’s proposition, soon known as the “Decalogue Bill,” formally acknowledged the power of the Ten Commandments. What rendered his proposition so striking, so novel, was its direct and unmediated importation of the biblical covenant into America’s judicial system. Few Americans at the time were likely to disagree about the impact of the Ten Commandments on American jurisprudence. One way or another, whether construed as divine law, natural law, or common law, the biblical construct made itself felt. But, at nearly every turn, the presence of the Ten Commandments was more a matter of high-minded rhetoric and allusion than of formal procedure. Had Walters carefully combed through extant case law, he would have found few, if any, instances in which it rested explicitly on the Decalogue. Not that this would have stayed his hand. The legislator had in mind to reverse the course of modern American legal history by expressly codifying the Ten Commandments as American jurisprudence. If he had his way, the spirit and the letter of the law would be one.

Walters went too far. Although a handful of Kansans at the grass roots applauded his efforts, even thanking God for the “one man that was willing to stand by the old and tried,” Walters’s proposal received quite a shellacking from his legislative colleagues. It did not stand the faintest chance of passing, not even on the third try. Some called the bill absurd, others “daffy,” and still others labeled it casuistic. Everyone wished it would go away. Was it fear of God that motivated their opposition? Or concern, perhaps, for the First Amendment? No, nothing quite as lofty as that. What fueled the resistance of Walters’s comrades was the prospect of looking rather silly. No Kansas politician wanted to be put in the position of having to confirm the wisdom of Moses or, worse still, of having to vote “yea” or “nay” on the Ten Commandments. It was far better to give Walters’s proposal a wide berth than to appear foolish. Outside the corridors of power, especially among the press, the well-intentioned assemblyman, the father of four, did not fare much better either. The fifth estate pilloried him. Within the pages of diverse newspapers such as the Topeka State Journal and the New-York Daily Tribune, he figured as an object of derision. Walters has the “courage of his absurdities,” charged one daily, while another facetiously suggested that “some Kansas sculptor should do for him what Michael Angelo did for Moses, and set him up in enduring bronze in the Capitol at Topeka.” A third publication wryly observed that Walters’s initiative underscored the “fertility of the legislative mind.”

To no one’s surprise save his, nothing came of the monument or the legislation. More of a footnote than a phenomenon, the “Decalogue Bill” remained a flash in the pan, yet another in a very long series of curiosities in which American history—and this book—delights. Even so, it hinted at a collective change of heart toward the Ten Commandments, a subtle dethroning that would generate increasingly insistent questions about their role in modern society as the nineteenth century gave way to the twentieth.