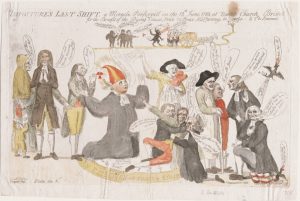 The Impostures Last Shift, illustration of the exorcism of Lukins being carried out by the seven clergymen / Lewis Walpole Library, Yale University

On May 31, 1778, the Reverend Joseph Easterbrook, Anglican vicar of the now-abandoned Temple Church in Bristol, England, was called in on what would become the most bizarre case of his clerical career.

Sarah Baber, a member of his parish, had recently visited the nearby town of Yatton where she came across a man suffering from a very  strange malady.  According to Mrs. Baber, the man in question, a forty-something former tailor named George Lukins experienced daily fits during which he “sang and screamed in various sounds, some of which did not resemble the modifications of a human voice; that he cursed and swore in a most tremendous manner, while in his fits, and declared that doctors could do him no service.”   Having lived in Yatton many years previously,  Mrs. Baber knew George Lukins and his entire family and described him as a “good, churchgoing man” who had shown no problems until his strange fits began eighteen years before.

The Lukins family had already tried taking George to various medical doctors, none of them had any clue about what was happening to cause these strange episodes.  As for George Lukins himself, he seemed as mystified as anyone over what was happening.  According to his own testimony, his possession began while he was performing a mummer’s play at Christmastime and he experienced what he called a “divine slap”  (possibly alcohol-related according to some people who knew him at the time).    Almost immediately afterward, his bizarre seizures started, including his making strange barking sounds and uncontrollable twitching of the right hand.  Many of the local townspeople suggested that George’s fits were due to being bewitched, an opinion that George himself seemed to share.   In fact, he had recently begun claiming that his fits were caused by his being possessed  by seven demons and that seven clergymen would be needed to drive them out.   Hence the reason for Sarah Baber approaching the Reverend Easterbrook for his help.

A few days later, the good vicar arranged for George to be brought to Bristol so he could be examined directly.   As Easterbrook later reported, his colleagues who had come to see Lukins for themselves  “were struck with horror and amazement,-at the sounds and expressions which they heard, and the unaccountable agitations and convulsions which they beheld.”  Satisfied that he was dealing with a genuine possession case, Easterbrook searched for clerics to help with the  exorcism. Unfortunately for him, this was more difficult than he thought since too many of his colleagues were skeptics concerning whether George was possessed rather than insane.

Despite efforts by Easterbrook and others to be as discreet as possible about the attempted exorcism, a June 11 letter to the Bristol Gazette written by an anonymous source made that impossible.   The letter described George Lukins as “the most singular case of perverted reason and bodilv suffering that I ever heard of; nor have the most learned and ingenious men been able to solve the phenomenon, much less to administer relief to the afflicted object. You may depend on the authenticity of every part of the relation, a member of my family having been near thirty years minister of the place where the person resides, many of my friends still inhabiting it, and myself having been frequently a witness to the facts I shall mention.”

Suddenly, the “Yatton Demoniac” was front-page news and the “discreet” exorcism that Easterbook had been planning became a public event.   When the vicar met with six of his colleagues in a vestry room at Temple Church to pray for Lukins, “a considerable number of people planted themselves upon the walls 0f the vestry-room and heard part of the prayers, the singing, the conversation, and the wonderful sounds which proceeded from George Lukins, and carried some account of these circumstances to a printer, who instantly dispatched papers upon the subject, through the streets of Bristol and its vicinage.’  (the 18th century version of Facebook, in other words).

To prevent some of the wild stories that were already starting to spread, Easterbrook and the others published their own account of what happened when they met with Lukins.   According to this new account, which was published on June 18 in the Bristol Gazette,  when they “began singing an hymn, on which [Lukins] was immediately thrown into strange agitations, (very different from his usual seizures) his face was variously distorted, and his whole body strongly convulsed, his right hand and arm then began to shake with violence, and after some violent throes, lie spake in a deep, hoarse, hollow voice, personating an invisible agent, calling the man to an account, and upbraiding him as a tool for bringing that silly company together…..  He then began to sing in his usual manner, (still persona Ling some invisible agent,) horribly blaspheming, boasted of his usual power, and vowed eternal vengeance on the miserable object, and on those present daring to oppose him ; and commanded his “faithful and obedient servants” to appear.”

Despite these terrifying antics, the clerics continued to pray and to command the demons inhabiting him to return to Hell.   Finally, the object of their prayers shouted out, “Blessed Jesus!” and his seizures suddenly stopped.   Lukins calmly thanked the clerics for what they had done for him and insisted that he was cured.    As proof, he recited the Lord’s Prayer and showed no sign of his previous possession.   The account concludes that the possession had been genuine and that Lukins  returned to his old life, completely cured. 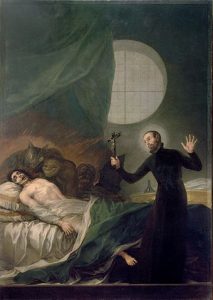 Unfortunately, the skeptics weren’t quite so convinced.   Almost immediately after the story on Lukins was published, other people who had known him in Yatton came forward suggesting that the entire possession story was fake.  Not only was George Lukins well known for his talent with ventriloquism and mimicry, but was apparently a bit of a hypochondriac as well.   Before long, clerics and medical doctors across the country began weighing in on the case of the Yatton Demoniac, and the general consensus wasn’t particularly positive for Easterbrook or his supporters.    Various theories were put forward, everything from outright fraud on Lukins’ part to suggestions that he was an epileptic, suffering from a “grievous hypochondriack disorder”, or even that he had been bitten by a rabid dog.

But the case of the Yatton Demoniac wasn’t quite over.   Joseph Easterbrook, no doubt feeling stung by the accusations of fraud and about his own supposed gullibility, wrote a treatise in 1788 which was titled, “An appeal to the public respecting George Lukins, (called the Yatton demoniac,) containing an account of his affliction and deliverance; Together with A Variety of Circumstances which tend to exculpate him from the Charge of Imposture.”  The book (which is available online), tried to vindicate rhw clerics who had carried out the exorcism though skeptics were less than impressed by the testimony Easterbrook provided.   Hannah More, a prominent religious writer, likely said it best when she wrote:  “The divining-rod is still considered as oracular in many places. Devils are cast out by seven ministers: and to complete the disgraceful catalogue, slavery is vindicated in print, and defended in the House of Peers. Poor human reason, when wilt thou come to years of discretion?”

As for Lukins himself, he largely faded into obscurity after his spectacular exorcism.   Though he returned to Yatton, he made repeated attempts to move to Bristol (apparently he enjoyed his time there).   Unfortunately for him, he had no income to speak  of (presumably his skills as a tailor had become rather rusty by then) and depended on his parish for support.   Since nobody in Bristol seemed inclined to finance his transfer, he was forced to remain in Yatton.  Nothing more was heard of him until February 1805 when an article in the Bristol Mirror was published announcing death.  According to the article, Lukins had been living in extreme poverty except for the money he raised by begging and selling small books.   He had also been a chronic invalid with numerous hypochondriacal complaints.   No real information was provided about the cause of his death.

While the case of George Lukins has been largely forgotten except by historians, the question of whether he was a deliberate fraud or suffering from some form of mental illness has never been answered.    In the centuries since his exorcism however,  surprisingly little has really changed.   As movies such as The Exorcist (which is now a television series) and The Exorcism of Audrey Rose continue to pervade the popular culture, new cases of presumed demonic possession are being reported in countries around the world.   Though many of these possession cases are unquestionably due to mental illness and stories of  “possessed” people being killed in the course of being exorcised continue to be heard, the demand for exorcists seems greater than ever.

George Lukins would have approved.