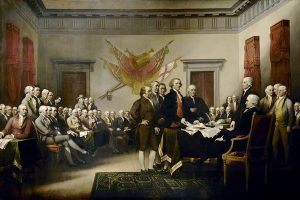 On a warm summer’s day in Philadelphia in 1776, early in the throes of American Revolution, Thomas Jefferson wrestled with the opening sentences of a document to King Louis XVI of France and King Carlos III of Spain, that would bring much-needed help to the embattled American colonies. The colonies had been at war with Britain for over a year now, and the military situation was dire. Without the direct intervention of Britain’s adversaries, France and Spain, on America’s side, the colonies could not hope to prevail against the superior British army and navy. 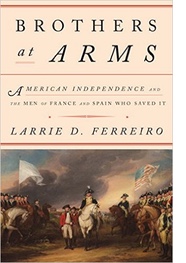 Brothers in Arms: American Independence and the Men of France and Spain Who Saved It / Larrie D. Ferreiro

The Colonists already had decided to break free from British rule. Stung by the battles at Lexington and Concord, and convinced that the ongoing war had irrevocably separated America from Britain, the colonial governments sent their delegates to the Continental Congress with instructions “immediately to cast off the British yoke” and “to concur with the delegates of the other Colonies in declaring Independency.” However, the American nation had begun its armed struggle against British rule stunningly incapable of fending for itself, like a rebellious adolescent who takes leave of his family without a penny to his name. It had no navy, little in the way of artillery, and a ragtag army and militia that were bereft of even the most basic ingredient of modern warfare: gunpowder. Soon after the Battle of Bunker Hill, Benjamin Franklin noted that “the Army had not five rounds of powder a man. The world wondered that we so seldom fired a cannon; we could not afford it.” America, in short, desperately needed to bring France and Spain into the conflict.

Neither Louis XVI nor Carlos III would take sides in a British civil war; America had to demonstrate that it was an independent nation fighting against a common British enemy. The document that emerged from under Jefferson’s hand, clearly stating that “these United Colonies are, and of Right ought to be Free and Independent States,” was an engraved invitation to France and Spain, asking them to go to war alongside the Americans. The document was approved by the Second Continental Congress on July 4, a Thursday, printed by the next day, and immediately dispatched to France the following Monday (copies would later go to Spain). This document became known, of course, as the Declaration of Independence, but in a sense it was also a declaration that “We Depend on France (and Spain, too).”

Americans therefore celebrate the July 4th holiday under false pretenses. The standard account regarding the Declaration of Independence goes something like this: The colonists could no longer tolerate the British government passing unjust laws and levying taxes without allowing proper representation. The Second Continental Congress voted to write a document explaining to King George III why they needed to be independent, and to justify to the American colonists and the world the reasons for revolting against the Crown.

Nothing could be further from the truth. The Declaration was not meant for King George III. The British monarch had already gotten the message, as he told Parliament in October 1775, that the rebellion “is manifestly carried on for the purpose of establishing an independent empire.” Nor was it primarily intended to rally the American colonists to the cause of independence, as they had already instructed their delegates to vote for separation. The very idea of a document to formally declare independence was unprecedented; no previous nation which had rebelled against its mother country, as the Netherlands did against Spain over a century earlier, needed to announce its intentions in written form.

Americans knew that France and Spain had long been spoiling for a rematch with Great Britain. They had come out badly in the Seven Years’ War against Britain, which ended in 1763 with France losing Canada and its central political position in Europe, and with Spain giving up Florida and its dominance over the Gulf of Mexico. France wanted to regain its political clout, while Spain needed to defend its Latin American colonies. Both nations saw American independence as a means of weakening British domination in Europe and overseas.

France and Spain had already been secretly providing arms and clothing to the rebellious American colonies. Even before Lexington and Concord, government-backed merchants from both nations had been assiduously trading European blankets, gunpowder, and muskets for American tobacco, whale oil, and cod. But blankets and muskets alone would never be enough against the British onslaught; in order to survive, America needed the full military might of France and Spain at its side.

The connection between a written declaration of independence and an American alliance with France and Spain had been publicly argued in January 1776 in Thomas Paine’s bestselling, Common Sense. Voicing the sentiments of many American leaders, he implored to his newly adopted countrymen, “Every thing that is right or natural pleads for separation. ‘TIS TIME TO PART.” He then went on to argue that “Nothing can settle our affairs so expeditiously as an open and determined declaration for independence…. [Neither] France or Spain will give us any kind of assistance, while we profess ourselves the subjects of Britain. The custom of all courts is against us, and will be so, until, by an independence, we take rank with other nations.”

The effect of Paine’s words was almost immediate. Within a few weeks of the publication, colonial leaders like Richard Henry Lee and Samuel Adams began taking up the call to formally declare independence from Britain with the express purpose of enlisting the help of France and Spain. Even John Adams, normally wary of any foreign entanglements, admitted that “We should be driven to the necessity of declaring ourselves independent states, and of treaties to be proposed to France and Spain. . . . We are distressed for want of artillery, arms, ammunition, clothing.”

On June 7, 1776, Richard Henry Lee stood before the Continental Congress and proclaimed the following motion: “That these United Colonies are, and of right ought to be, free and independent States…. That it is expedient forthwith to take the most effectual measures for forming foreign Alliances.” While Congress debated Lee’s resolution, a small committee was formed to draft the declaration. Thomas Jefferson was chosen as its author. With little direction from Congress or time to spare, Jefferson’s great genius was to transform the original call for a distress signal into one of the most remarkable documents of Enlightenment thinking, arguing the case for independence based upon principles of freedom, equality, and natural rights.

The text that was finally voted on, after weeks of writing and rewriting, explained why the Americans wished to separate from Britain. As Jefferson asserted, “We hold these truths to be self-evident, that all men are created equal, that they are endowed by their Creator with certain unalienable Rights, that among these are Life, Liberty and the pursuit of Happiness.—That to secure these rights, Governments are instituted among Men, deriving their just powers from the consent of the governed.” The British monarch had not lived up to these ideals, he argued, and subjected the American colonies to a long list of abuses. For these reasons, America had shed its allegiance to the Crown and was now an independent nation.

At the very end of the document came the message that the Kings of France and Spain would have taken notice of: “And for the support of this Declaration, with a firm reliance on the protection of divine Providence, we mutually pledge to each other our Lives, our Fortunes and our sacred Honor.” In other words: “We have staked everything on winning this war with Britain.” Unspoken was the plea: Now please come to our aid.

And so they did. Within a year, France signed treaties with the fledgling American nation, automatically bringing it into war against Britain. A year after that, Spain joined France in the fight, though it never formally allied with the United States. Together they turned a local war into a world war, which bled off British forces from America. Two years later, Spain wrested Florida from Britain and French troops fought shoulder-to-shoulder with Americans at Yorktown, effectively ending the conflict.

The Declaration of Independence therefore marks us as a nation that was created as part of an international alliance. As we are today interconnected across the planet in ways unimaginable to the Founding Fathers, we must remember that the United States was born global, and has been so throughout its history.