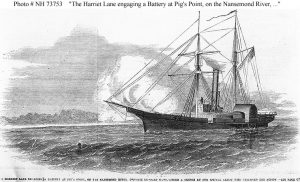 The Harriet Lane engaging in a battery at Pig’s Point

My Grandfather’s account of the escape of the Harriet Lane through the Union blockade of Galveston. The letter is addressed to “Friend Phillips” the then editor of the North AdamsTranscript, North Adams, Massachusetts. On board U. S. Steam Sloop “Lackawanna” Off Galveston, May 1864 Friend Phillips:

You have doubtless ere this heard of the unfortunate event that has transpired upon this station, namely: the ‘running out’ of the late U.S. Steamer “Harriet Lane”, through the Blockading Fleet here, and although I cannot deny that this occurred through neglect upon the part of some here, and that the blame, unjustly it is true, will eventually fall upon the whole Fleet, still, in justice to myself and the noble ship in which I now am, I cannot feel willing to have those, who have known me from by boyhood, think that it happened through a lack of care or patriotism upon the part of my Commander, my shipmates of myself, or any defect in our gallant vessel. I have therefore taken this my first opportunity since then to send you a plain unvarnished statement of the events that transpired on the night of the 30th of April, trusting that you may soon find it convenient to insert the same in the columns of your able paper.

The U. S. Steam Sloop “Lackawanna:, Capt. J. B. Marchend, left the Blockading Fleet of Mobile, March 4th 1964, for the purpose of becoming the Flagship to the Squadron on the Coast of Texas. Before leaving Mobile, Captain Marchand was especially enjoined by Admiral Farragut, then in the”Hartford” at that station, to look out particularly for the “Harriet Lane”, which was known to be loading in Galveston Bay for the purpose of running the Blockade. Upon the capture of her, he said, the Navy Department was determined to risk everything and he sent the “Lackawanna” there as being the fleetest steamer in the Gulf. He, Captain Marchand, was to allow no outside considerations to influence him in the vigorous persecution of this particular duty, and he was on no account to leave his station and give chase to any vessel that was not in all probability the one so coveted. The “Lackawanna” arrived off Galveston March 11th and Captain Marchand took charge of the Squadron on the ensuing 15th. On our way down we made 10 knots, or miles, per hour under easy steam, 9 fires out of 14, and sail and everything worked admirably, while with the same steam alone and wind ahead we made 7 and 8 knots for hour after hour in succession. In fact I never saw machinery or a vessel perform better, and all on board were loud in her praises. As soon as he had taken charge, our Captain, mindful of his orders, consulted his Pilot and stationed his Fleet.

It was supposed that the “Lane” would run out of either the Main Ship Channel or the one next to it called the Cylinder Channel, for she drew 10 1/2 feet of water when in the U. S. Navy, and although her battery had been removed, it was reasonable to suppose that her cargo would amount to nearly half the same weight and give her nine feet draft of water. This would prevent her going out of any channel but the ones supposed, and at the entrance of the Main Ship Channel, we, being the heaviest ship in the Fleet and drawing 16 feet, were stationed. The gunboats, some five in number, and drawing about 10 feet each, were stationed at the various other channels leading away from the main entrance, some three miles wide, out to the sea, and strict orders were given them if they saw a steamer running in, or more particularly running out, that they should immediately notify the Flagship of it and the direction she was steering, by means of night signal lights and rockets, which had been agreed upon. They were in fact to act as sentinels guarding the various avenues to the bay, and were to notify the commanding Officer of the first advance of a superior force. These Gunboats were not to be relied upon in the chase of a steamer, for the best of them will steam barely 8 knots with a head wind, the favorite course for the Blockade runners when pursued, and it is a poor Blockade runner on this coast now that cannot steam eleven and twelve knots. These facts our Captain well knew and depended upon his own ship entirely to perform this duty, for he knew from experience that she could, if driven, steam twelve and even more, but he could not guard all the channels that led into the Bay. This unfortunately he was obliged to entrust to others and thus upon their obedience to his orders depended the success of the whole plan of operations.

Our Station, at the entrance of the Main Ship Channel, was about four miles from the city of Galveston and almost due East from it. From our decks, in the daytime, the city was plainly to be seen, as well as quite a portion of the shipping inside, the “Lane” among the rest. Here we lay and watched for about two months without scarcely an event of note transpiring until the 30th of April, when that for which we had so looked took place. The day had been foggy with occasional showers of rain, and in the afternoon we had been favored with a thunder storm. The night set in dark and cloudy, and the word was passed on deck “to look out sharp for the Harriet Lane”.

At about 9 P. M. I went on deck to enjoy my evening cigar and whilesmoking, I noticed that there had been a change in the weather. The storm appeared to be blowing to the Southard and Westard and the greater part of the Heavens the stars had appeared, but toward the land all was black asink for the cloud still hovered over it and in the Southwest an occasional flash of lightning could be seen, very small, and followed sometimes by a low peal of thunder. “What a fine night for the ‘Lane’ to run out”, said I to an Officer near by. “Yes”, replied he, “she could run tonight, if ever.” And by a strange coincidence at that very moment under the dark shadow of the land, by a channel close in shore, she was silently steaming out to sea. I finished my cigar and going below turned in, but hardly was I asleep when I was awakened by a commotion in the “Ward Room” and I heard some one say that guns had been heard in the Southwest. I turned out and went on deck to see what the excitement was about. I found many of the Officers there and among them the Captain.

Every thing was in readiness to “slip the chain” and get under way immediately, but as yet no signal for a “Steamer running out” had been made by any Gunboat on the inshore stations. Nothing could be seen from our decks and there was, of course, no reason for our leaving our station. Soon there was a flash followed by another and then came the two succeeding reports. It looked and sounded like the explosion of a gun and a loaded shell, but it might also have been two of those flashes of lightning I have mentioned before. All looked anxiously for the desired signal but none could be seen. Without it we could not move, for a mistake at such a time as this would be fatal to the general plan.

Another gun was heard, but still we looked in vain for the signal light. None had been or was made that night unless the guns may be considered as such. Firing a gun, however, at night in this Blockading Fleet was no signal to us, since it might have been fired to “heave to” a schooner or fishing smack as well as a steamer, and in the former case we were, of course, not interested. All on deck were anxious to get under way and go out in the direction of the firing, for all seemed to feel that some steamer was running out and in all probability the “Lane”.

In the engine room all preparations for starting were quietly made that the judgment could suggest, and one look into the fire room showed splendid fires and plenty of steam. The men stood around the chain expecting the word to “slip”every moment, while all not thus engaged were eagerly looking into the darkness for the signal light. Minute succeeded minute and it came not and when finally a quarter hour had passed it was given up by all as being too late now and nearly all went below that were not on duty. Some few remained to talk the matter over, myself among the number. The majority thought that a steamer had run and that a gunboat, probably the “Katahdin” in chase had fired at her. Some thought that it was a schooner or the gunboat would have made signals. But the guns had been fired all often miles away from the station of any gunboat at either of the channels. Could it not have been an “Army transport” on her way down the coast to the “Rio Grande” firing to “heave to” some vessel? In fact all was doubt and uncertainty and we finally concluded to wait and see what the day light would disclose. Few there were of us indeed that went to bed satisfied on that eventful evening.

Morning came and with it sad disclosures. Galveston Bay was clear of shipping as far as could be seen from our masthead and the Gunboat “Katahdin” was gone from her station and out of sight as well. She it was then that had fired the guns, so much was settled, but had the “Lane” gone? In all probability she had, but she might have gone up the Bay out of sight as a blind to make us think that she was gone and thus disarm our vigilance. We could not think that she had run without being seen by the “Katahdin”, which lay within a mile and a half of shore and right in the center of the inshore channel, and had she been seen by her, would not her Captain have made signals? He was gone, but after a schooner probably, for he burned no lights to show that a steamer had passed him. Thus we reasoned and hoped almost against hope all that day, all the next, and part of the next until the “Katahdin” came sailing in like a lame duck as she was, for her coal was all gone. Her report, made as she passed our stern, buy her Captain through a speaking trumpet was “Have been in chase of the “Harriet Lane” and “Matagorda”. Lost both last Sunday night off the coast of Louisiana. Will come on board soon.”

Originally published by eHistory at The Ohio State University under a Creative Commons license.